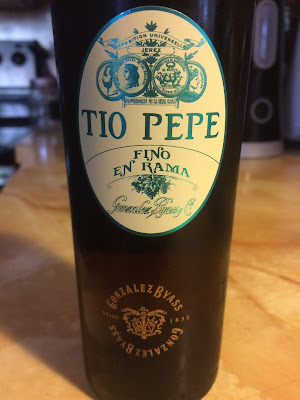 It bears regular repeating, and I can't say it enough, so Stop Neglecting Sherry! Having written over 40 articles on Sherry, it's clear that I'm a passionate advocate for this unique, fortified wine from Spain. It remains a niche wine, under appreciated by far too many wine lovers, and I want that to change. Today, I'm here with a review of a recently released Sherry, one representative of a growing and exciting movement in the Sherry industry, the En Rama style.

When Fino and Manzanilla Sherries age within the barrel, a layer of flor, a film of yeast, develops atop the liquid. Generally, the flor prevents oxidation and also contributes to the Sherry's aromas. For some time, Sherries have commonly undergone heavy filtration to eliminate flor residue and other impurities, as well to make a more stable and lighter wine. However, such filtration also can strip out some of the flavor, texture and color of Sherry. There is now a growing movement to produce some Fino and Manzanilla without heavy filtration, and these type of Sherries have now become known as En Rama.

En Rama Sherry is either unfiltered or usually lightly filtered, allowing the Sherry to taste more like it does directly out of the barrel. It tends to be more intense and complex, with richer colors and aromas. En Rama Sherry is often released in the spring, as that is the best time for the flor, when it is most active and thick over the wine in the barrel. This category is less than 20 years old and it is only within the last few years has it become more easily available locally, in both restaurants and wine shops.

Back in 2010, González Byass, released their first En Rama, using their famed Tio Pepe Fino. Coincidentally, I visited the González Byass Bodega in 2010, though there wasn't any discussion of En Rama at that time. You can check out my prior article for more background on this compelling bodega, which produces a full line of compelling Sherries. Each year, González Byass releases a new Tio Pepe Fino En Rama and 2018 is their ninth release. I recently received a media sample of this new En Rama and was thoroughly pleased with its taste and complexity.

The Fino En Rama is a blend, bottled in April, of 62 carefully selected barrels from the La Constancia and Rebollo cellars. The wine in these barrels, which spent 4-5 years in the solera, is made from Palomino grapes from the famed Macharnudo vineyards. The winemaker, Antonio Flores, has nicknamed this release Armonía Perfecta ("perfect harmony."), also noting that 2018 is "the very best interpretation of vine and cellar, chalk dust and long hours spent selecting this very unique, fresh wine: harmonious, like the sound of a guitar in the stillness of the afternoon."

For the first time, as well as the standard 750ml and 375ml bottles, the En Rama will also be available in a limited quantity of magnums. Many recommend that you consume En Rama within several months of purchase, with the assumption that it won't age well. However, that train of thought may be changing, and some now believe it can age, though obviously aged En Rama will taste very differently over time. With the release of an En Rama in a magnum, it may be support for aging this En Rama, especially as this vintage was so special.

With a 15% ABV, the Tio Pepe Fino En Rama ($27/750ml) has a bright golden color and is aromatic, with intriguing notes of toast and the briny nature of the sea. On the palate, it is fresh and dry, with a complex and intense melange of citrus, almonds, and the taste of the ocean. The finish has a tinge of bitterness, which doesn't detract from the taste, and lingers on your palate for quite a time. It is not as light and subtle as more heavily filtered Fino Sherries. I'm a big fan of this style and love the intense expressiveness of this Tio Pepe.

I'd recommend serving this Sherry slightly chilled and it would pair well with plenty of dishes, from fried foods to seafood, charcuterie to even pork. I enjoyed this Sherry with a simple dish of Fish Sticks, and it worked great. Share a glass of Sherry with friends and family. And I highly recommend you check out the Tio Pepe Fino En Rama.
Posted by Richard Auffrey at 3:00 AM