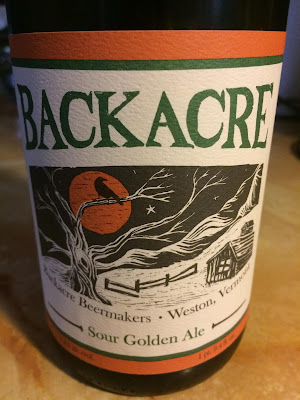 Maybe once a year I find a beer that appeals to me, the hoppy nature of most beers turning me off. I have found that I enjoy some Sour Beers though, which taste to me more like a cider or sparkling wine. My friend Marc Hurwitz, of Boston's Hidden Restaurants, is a passionate beer aficionado and he recently gave me a bottle of Backacre Beermakers Sour Golden Ale to try. When he had described the beer to me, it sounded like something I might enjoy. And I certainly did!

Backacre Beermakers considers itself a "blendery" rather than a brewery as they source wort, unfermented beer, from a number of local brewers, and then ferment the wort at their facility. This is an old historical practice that fell out of favor with many breweries. Most breweries use a single yeast strain for their fermentation but Backacre chooses to use a mix of yeast strains. Once the beer is fermented, they will then age the beer for over a year in oak barrels, former white wine barrels from Napa, California. Finally, they blend the beer from different barrels to make the final product, which is only done a few times a year, each blend possessing its own unique number.

Unlike some breweries which produce a myriad of different beers, Backacre chooses to produce only one item, their Sour Golden Ale, which is inspired by the Gueuze, a Belgian lambic. The Sour Golden Ale is capable of being aged for years, if stored in a cold and dark spot. It is available in a 750ml bottle for about $20, however it is very popular so you might have difficulty finding it. Their website lists a number of stores in Vermont that carry the ale so you might get lucky and locate it. On the secondary market, you could pay $50 or more for a bottle.

When I opened the bottle, some of the foam within bubbled out of the neck, a sure sign of life. With a nice golden color, I was impressed with its complex blend of flavors, with plenty of tartness, bright citrus notes, spice notes, and earthy hints. It certainly reminded me of certain, more natural ciders, and if you blind-tested someone on it, they might not even know it was a beer. Two of us finished off the bottle, which is 7.2% ABV, in a single evening, and I still craved for more.

This Sour Golden Ale would pair well with a number of different foods, and Backacre recommends cured meats and cheeses. I think it would also go well with oysters, as well as other seafood dishes, and maybe some spicy Indian or Thai dishes. It certainly drinks well on its own and would be great this summer while you sit outside in the warm sun relaxing with friends.

Much appreciation to Marc for introducing me to this fine beer.