The origins of Scheid Vineyards, in Monterey County, extend back to 1972 and at that time, Al Scheid probably never imagined what his business would become. Starting as a tax shelter, the business would eventually evolve into a passion for the Scheid family, producing some delicious and interesting wines.

Initially, the business, created as a tax shelter, was called the Monterey Farming Corporation and they purchased land to plant vineyards, selling the grapes to various producers. This continued for about fifteen years, when Al brought his eldest son, Scott, on board and then, in 1988, they hired Kurt Gollnick, viticulturist, as General Manager of Vineyard Operations. They initiated some improvements to their vineyards and in the early 1990s, Al brought his daughter, Heidi, into the business.

At some point, it seems a passion for winemaking took hold. The Scheids bought out all their business partners, redeveloped their vineyards, bought additional vineyards, and began their own label. Currently, they own eleven estate vineyards, located along a 70-mile span of the Salinas Valley, that grow 39 varietals and 20 clones of Pinot Noir. They operate two wineries, including a large one which produces custom-made wines for other companies, the greatest part of their business. Their smaller winery is used to produce wines for their own label. Scheid Vineyards are also committed to sustainability on several levels, including environmentally sound practices, social equity, and economic viability. All of their vineyards are certified by the California Sustainable Winegrowing Alliance.

Scheid Vineyards has been increasing its emphasis on selling their own wine, and in 2017, their case sales increased about 5% to $12.7 Million, compared to $12.1 Million in 2016. I received some media samples of three of their wines, all low production, and really enjoyed their taste and diversity. All three are great choices for the summer, especially paired with food. 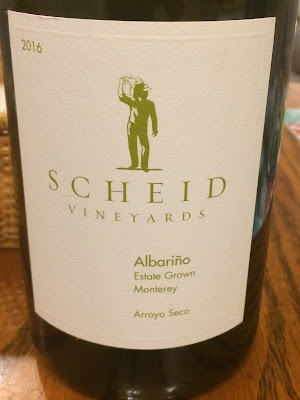 The 2016 Scheid Vineyards Albarino ($22) is made from 100% Albarino, from the Arroyo Seco appellation of Monterey, of which they only grow about a half-acre. Only 220 cases of this wine is produced, and the wine is fermented and aged only in stainless steel. With a 13.7% ABV, this wine has a fine golden color, a nose of bright citrus, and an interesting taste of apple, lemon, and grapefruit with a backbone of minerality. It was dry and crisp, with a pleasing, long finish. There is a freshness to this wine, and it would be enjoyable on its own or paired with seafood, from oysters to lobster. 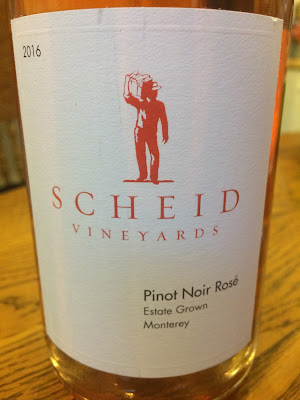 The 2016 Scheid Vineyards Pinot Noir Rosé ($19) is made from 100% Pinot Noir that was sourced from the Mesa del Rio vineyard. The wine was macerated on the skins for 12 hours and later aged in stainless steel for about eight months, with only 140 cases produced. With a 13.5% ABV, this wine had an alluring aroma of fresh strawberries, and on the palate was dry and crips, with juicy red fruit flavors as well as a touch of cranberry. Refreshing and delicious, this Rosé was complex and interesting, and another wine which is enjoyable on its own, though it would also pair well with a variety of foods, from seafood to burgers. 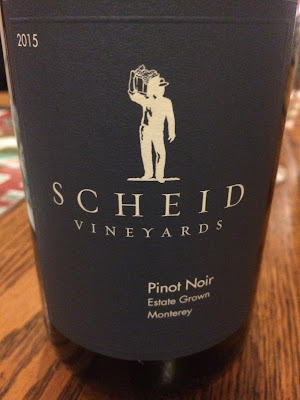 The 2015 Scheid Vineyards Pinot Noir ($36) is made from 100% Pinot Noir, a blend of grapes from two estate vineyards, 71% Vineto and 29% Riverview. The wine is aged for about 9 months in neutral French oak and only 106 cases are produced. With a 14.1% ABV, the wine had an appealing nose of red and black fruits with a hint of spice. On the palate, the wine was light bodied and silky, with a complex melange of flavors, from cherry to blackberry, cranberry to plum, with subtle spice notes, a touch of vanilla, and a hint of smoke, especially on the lengthy finish. An elegant Pinot, this is a wine to slowly savor over the course of an evening. Highly recommended.
Posted by Richard Auffrey at 9:41 AM