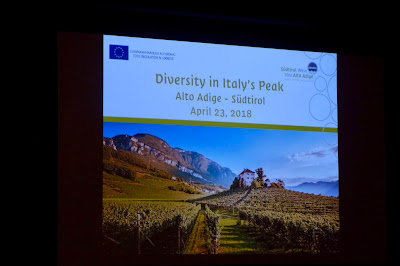 Can you still find Rhaetian wines, and if so, where?

The Italian region of Alto Adige - Südtirol is the most northernmost wine region in that country, bordering Austria and Switzerland, and sits amidst the Alps and the Dolomites. About twenty-five hundred years ago, this region was home to the Rhaeti, a confederation of alpine tribes, and they are known to have grown vineyards and produced wine. Around 15 B.C., the Romans conquered the Rhaeti, making this region a province of Rome, and continuing the practice of viniculture, especially as they found this region excellent for vineyards.

So, by drinking the wines of the Alto Adige - Südtirol region, you can drink wines of the terroir so highly prized by the ancient writers mentioned above, as well as Augustus Caesar. 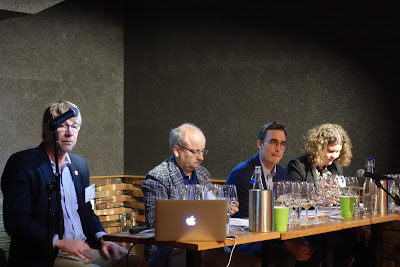 I recently attended a trade tasting and seminar on the wines of the Alto Adige-Südtirol, which was moderated by Tim Gaiser, Master Sommelier. The rest of the panel included Judith Unterholzner, the Sales Director for Cantina Keltern and Erste+Neue, Harald Cronst, the Export Manager for Cantina Kurtatsch, and Gottfried Pollinger, the Managing Director of Nals Magreid, The seminar opened with their joint philosophy, "We live wine." Such a beautiful philosophy.

We were then presented with a bit more history, noting that in 1853, the first wine cooperative was established in the region and such cooperatives have remained very important. It wasn't until 1919, after World War I, that Alto Adige-Südtirol became a part of the country of Italy. The region attained DOC status in 1975 and in 2007, the Consortium of Alto Adige-Südtirol was formed. Currently, the region consists of approximately 13,300 acres of vineyards, planted at altitudes from 600 to 3,300 feet, and the soil is primarily volcanic porphyry. It is one of the smallest wine regions in Italy, only about 1% of Italy's total production, however 98% of their wines are of DOC/DOP quality, indicative of the high quality of their wines.

The region has both Alpine and Mediterranean influences and is one of the warmest in Italy, with over 300 days of sunshine and large diurnal shifts. Annually, it receives about 32.5 inches of rain, and vines only need 26 inches so they receive the water they need despite all the sunshine and warmth. This is also a region that is well known for its apples, with over 8,000 growers, and it provides about 10% of all European apples. That is significant considering the tiny size of this region. It is also known for making over 90 different types of cheese!

In 2017, the Alto Adige-Südtirol produced about 3.1 million cases of wine, exporting about 1/3, and their main export markets are Germany, the U.S., and Switzerland. As such, they are very much niche wines which you need to seek out. Their wines tend to have pure, natural flavors and high acidity, and  nearly all of their wines spend some time on the lees. Cooperatives are significant, bringing together many tiny farmers, mostly organic, giving them plenty of flexibility and opportunity. To join a cooperative, a farmer must join with all of their vineyards. Finally, the wines of Alto Adige-Südtirol are great food wines and often very good values.

We then proceeded to some comparison tastings, two wines of six different grapes, three white and three red. Of these pairings, I'm going to mention my personal favorite of each comparison.

We began with Pinot Bianco, also known as Weissburgunder, which was first planted in 1852 and now comprises about 1334 acres in the region. Tim Gaiser stated that Pinot Bianco is the "perfect wine in the glass." The Alois Lageder winery, established in 1823, is currently owned and operated by the 5th and 6th generations, Alois and Alois Clements Lageder. The winery is also committed to Biodynamic agriculture. The 2016 Alois Lageder Pinot Bianco Haberle is made from 100% Pinot Bianco, from 21-49 year old vines, and the wine was aged for about 8 months in casks (85%) and stainless steel. With a 13$ ABV, this wine was elegant and complex, with bright fruit notes, from peach to pear, citrus to apple, and a crisp acidity. There are also some underlying mineral notes and a pleasing finish. An excellent summer wine, and which would pair well with seafood and vegetables.

We moved onto Pinot Grigio, also known as Rulander and Grauburgunder, which was first planted in 1848 and now comprises about 1554 acres in the region. It is the most planted variety however the locals don't consume it a lot. The Cantina Tramin winery was founded in 1900, and currently is a cooperative of about 650 growers and 1164 acres of vineyards. The 2016 Cantina Tramin Pinot Grigio Unterebner, made from 100$ pinot Grigio, was aged for 14 months in a mix of 30-40hl casks and 500 liter tonneux. At 14% ABV, it is a more full bodied wine, with citrus flavors, especially lemon, crisp acidity, and savory notes, especially on the finish.

For the final white, we went with Gewurtztraminer, an indigenous variety that is the oldest white variety documented in their records. About 1418 acres are planted, and it was noted that this grape produces the most sugar so it possesses a rounder mouthfeel and works well with spicy dishes. The 2016 Elena Walch Gewrutraminer Vigna Kastlelaz, made from 100% Gewurtztraminer, from 18-25 year old vines, spent about 7 months on the less in stainless steel. With a 14.5% ABV, this wine was extremely aromatic with intense spice notes, some floral elements and a backbone of minerality. Complex and interesting, this would be great with Thai to Indian cuisine.

Our first red grape was Schiava, of which I'll go into more detail later in this article. The Castel Sallegg winery, founded in 1851, is a family run firm of winegrowers, owned by Count von Kuenberg. Their winemaking philosophy is "be genuine." The 2017 Castel Sallegg Lago di Caldaro Scelto Classico Bischofsleiten, made from 100% Schiava, is a single vineyard wine that was aged for 4 months in stainless steel and has a 13.2% ABV. Light bodied, the wine has a nice depth of flavor, with more savory notes, subtle red fruit flavors and a spicy backbone. Very interesting and complex, this wine also has a long, lingering and satisfying finish.

Next we moved onto Pinot Nero, also known as Blauburgunder, which has been grown in the region since the 19th century and there are now 1095 acres of vineyards. The Colterenzio Winery, founded in 1960, is one of the newest cooperatives with 300 winegrowers and 741 acres. Sustainability is very important to them. The 2015 Colterenzio Winery Pinot Nero Riserva St. Daniel, made from 100% Pinot Nero, was aged for 12 months in 35hl casks and barriques, and has a 13.5% ABV. Made more in a Burgundian style, this wine was light bodied with lots of bright red fruits, including some sour cherry, and mild spice notes. Elegant and tasty, it would be a fun summer wine, and would go well with burgers and hotdogs.

The final red grape was Lagrein, occupying 1156 acres, which is an indigenous grape deeply rooted in Bolzano and its first documented mention goes back to 1318. The Cantina Bolzano was formed in 2001, from a merger of two wineries, Gries and St. Magdalena, and is now a cooperative of 220 growers and 864 acres of vineyards. The 2015 Cantina Bolzano Lagrein Riserva Taber, made from 100% Lagrein, was aged for 12 months in French barriques and has a 14% ABV. This is a fruity wine, with concentrated flavors, subtle spice notes and hints of violets. It is an easy drinking wine, which would be delicious on its own or paired with food. 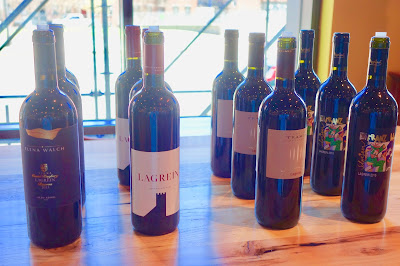 I was especially taken with the Schiava wines. It is an indigenous grape, whose name derives from the word "slave," which was first documented back in 1195 and played a primary tole in the region during the 16th century. It is also known by the German names Vernatsch and Trollinger. Currently, though it has lost some popularity recently, there are about 1972 acres of vineyards, primarily in Bolzano, Merano, Oltradige, and Bassa Atesina. Schiava is said to be a workhouse vine (which may explain its name and derivation), fertile with lots of heavy vines, and more of a prima donna than Pinot Noir. It tends to be light bodied and easy drinking, with almost no tannins and light acidity. Time stated that it was the "best wine for breakfast, lunch and dinner," and is an excellent food wine, especially in the summer when it can be served with a light chill. Just note that you probably won't see the name of the grape on the wine label, just its appellation.

After the seminar, there was an open tasting of other Alto Adige-Südtirol including two additional Schiava wines, both which I tasted. 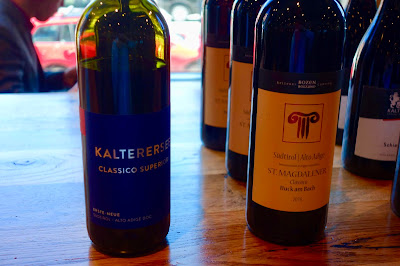 The 2016 Cantina Bolzano St. Maddalena Classico Huck am Bach, made from 100% Schiava, was aged in large oak casks, and has a 13% ABV. This was an intriguing and complex wine, with plenty of cherry and plum flavors, mild spices notes, a floral wisp, but also a meaty taste, with a smoky finish. Medium-bodied, the wine also had mild tannins and a lengthy finish. Quite delicious and would pair well with grilled meats. Highly recommended. 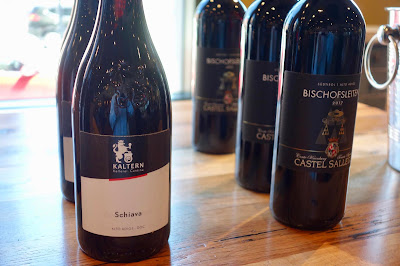 The Cantina Kaltern was a cooperative founded in 1900 that now consists of 650 growers and 1164 acres. The 2017 Cantina Kaltern Schiava, made from 100% Schiava, was aged for 4 months in stainless steel and large oak casks, and has a 12.5% ABV. It was light bodied, with prominent red fruit flavors, a spicy backbone and crisp acidity. It wasn't as complex as the other Schiava, but still was more than a simple wine. This would be a good wine on its own or paired with meat dishes, or even salmon and tuna.

Augustus Caesar was definitely onto something as the Alto Adige-Südtirol are compelling, food friendly, and delicious.
Posted by Richard Auffrey at 3:00 AM