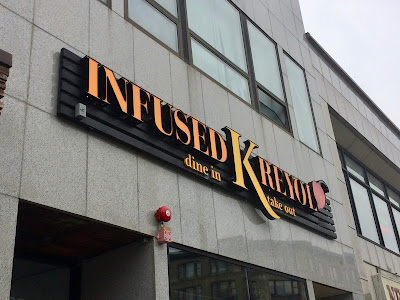 I have little familiarity with Haitian cuisine so was intrigued when I noticed a Haitian restaurant, Infused Kreyol, would soon open in Malden. The spot once belonged, for quite a long time, to the Sun Guang Bakery, a great Chinese bakery, and was later taken over, for a much shorter time, by Sweet Kingdom, an Asian dessert spot. Infused Kreyol opened last month and I wanted to provide my initial impressions after having dined there three times for lunch. As the restaurant has only recently opened, this isn't a formal review, giving them time to work out the final kinks. 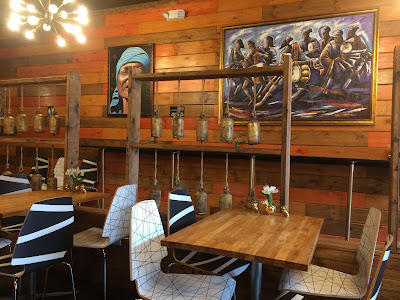 Infused Kreyol was founded by Dominique and Daniella Zephyr-Gutierrez, twins who grew up in Malden. Their father was Haitian and their mother was Haitian-Dominican, so though the restaurant's cuisine is primarily Haitian, there are also nods to Dominican and other Caribbean cuisines. The restaurant seats about 40 people and there is a very casual ambiance, enhanced by the artwork on the walls. In fact, as you enter the restaurant, you'll walk down their "Art Walk", checking out some of the artwork. 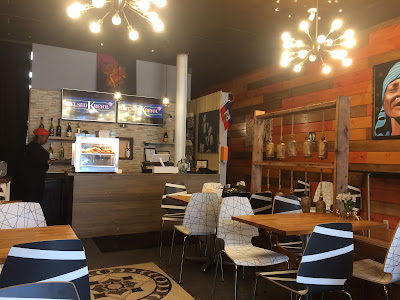 Behind the counter, there is more artwork, including a painting of their mother, and a painting of both twins. There is also a display of some of the wines they serve. And of interest, there is a heated glass case which stores freshly-made Paté, which you can buy to go (and which I highly recommend you do). I'll talk more about those Paté later in this post. 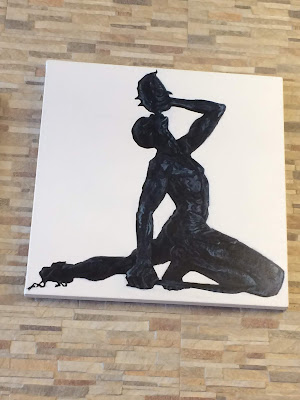 A painting on another wall, which is a significant symbol for the restaurant, depicts the Le Marron Inconnu de Saint-Domingue, "The Unknown Slave," a bronze statue of a runaway slave that commemorates the abolishment of slavery. The statue, created by Haitian sculptor Albert Mangonès  in 1967, is displayed in Port-au-Prince, Haiti. The painting also adorns the cover of the restaurant's menus. 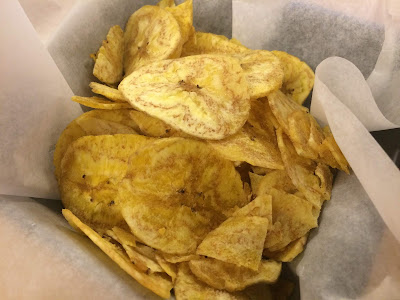 Above, you'll see Plantain Chips, which I was offered on two of my three visits. They are a complimentary snack provided once you order your food. They are thin, crunchy, and tasty though might benefit from a bit of salt. 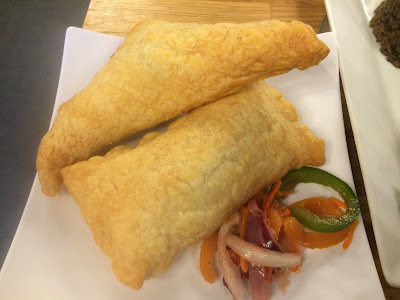 One of the Small Bites is the Paté ($2.50), a flaky pastry filled with shredded chicken, ground beef, cod fish or veggie. I tasted three of the four, excluding the veggie, and loved them! They are made fresh each day, and on two of my visits, the cod fish paté weren't available as they hadn't been made yet. The pastry is light, flaky and buttery, exactly what you want it to be, and the fillings have intense and tasty flavors, spiced well. And at this price, they are an excellent value. If nothing else, you should stop by Infused Kreyol and pick up a bunch of these paté to enjoy at home. 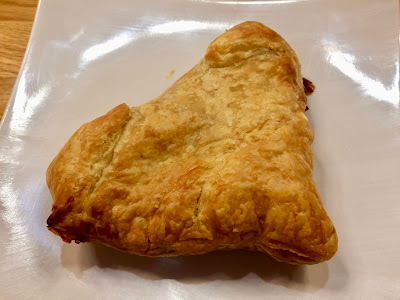 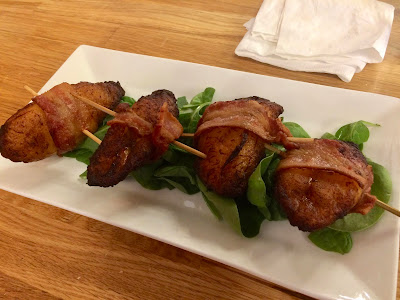 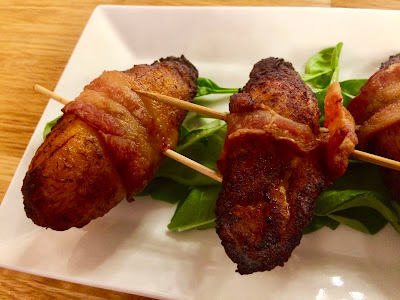 Another Small Bite was the Bacon Wrapped Sweet Plantains ($10), which sounds great and tastes as you imagined. The large pieces of fried plantains had a nice caramelized exterior, and were soft and almost mushy inside, but with a sufficient firmness. The salty bacon enhanced the sweetness of the plantains. An excellent appetizer and nearly addictive. 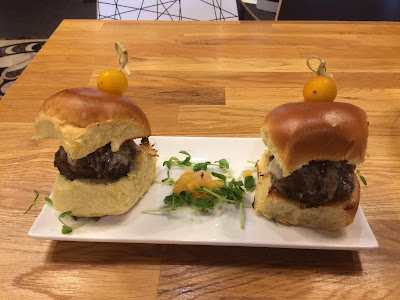 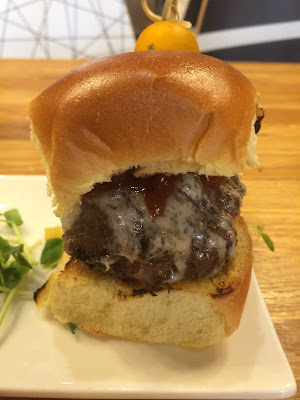 The Jerk Beef Sliders ($10), topped with a pineapple-mango chutney, are noted as Spicy though you can order just a regular burger instead. I opted for the Jerk and they were delicious, spicy without being overly hot. Each burger was relatively large and thick for a slider, and they were juicy and meaty, topped by melted cheese. The chutney added some sweetness to balance the jerk spices, as well as a bit of texture. The soft, fresh roll worked well for the burger too. Another winner of a dish.

For a Side, I wanted to try their Corn Bread, but it wasn't available on any of my visits. 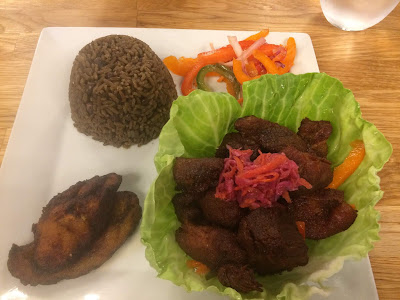 For an Infused Plate, I chose the Griot ($15), pork shoulder marinated and fried in savory sauce with peppers and onions. I chose Black Rice and Sweet Plantains to accompany the griot. 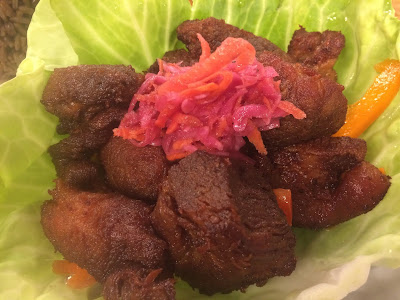 The pieces of pork shoulder were compelling, with a great crunchy, fried coating and moist, flavorful pork inside. Even the few fatty pieces were delicious, being silky smooth inside the crunchy coating. An absolutely delicious dish and you can order the Griot as a Small Bite as well, without the rice and plantains. 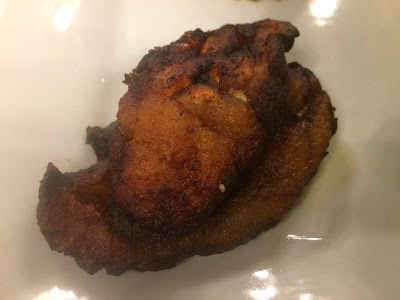 The Fried Sweet Plantains were delicious, just as tasty as the ones that come wrapped in bacon. 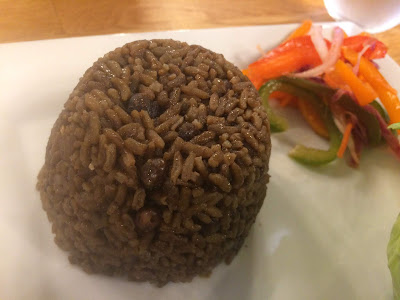 The Black Rice had an interesting flavor, with peas and spices. 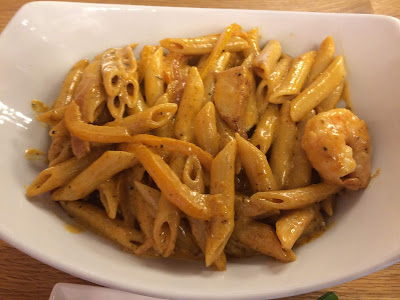 The Kreyol Pasta ($18), an ample portion, is topped by a spicy and rich cream sauce and comes with either Chicken & Shrimp or Andouille Sausage and Shrimp. I opted for the sausage and shrimp. Though the pasta was cooked well, and the cream sauce was tasty, with a nice blend of spices, the sausage was a bit tough and there were only two shrimp. 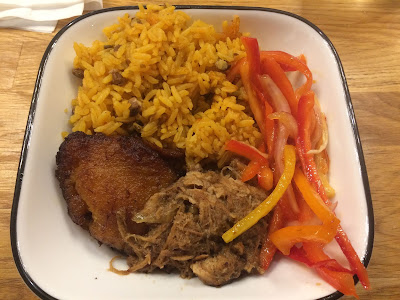 The Lunch Bowl ($10) comes with your choice of pulled pork, stewed beef, or shredded chicken, and rice, plantains, peppers and onions. I chose the pulled pork with Spanish rice, a good sized dish for the price. The pulled pork was moist, tender and had a nice depth of flavor. If you want a value lunch choice, this is a great option. 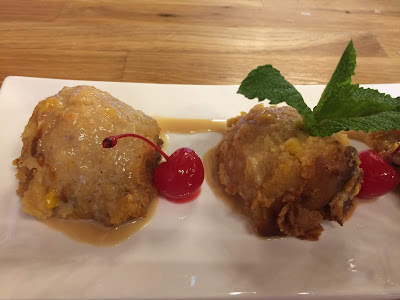 For Dessert, I wanted to get the Haitian Beyens, banana fritters, but they are only made for dinner. I decided to try Gigi's Cream Corn Souffle ($6), which is infused with Haitian cremas. The three souffles reminded me of a corn pudding we often make for the holidays. It was like a bread pudding texture, with sweet corn and crema, and some deeper flavors as well. Savory and sweet, a very good option.

Overall, I was impressed with the cuisine at Infused Kreyol. There is a compelling depth of flavor to most of their dishes, and I like the freshness of each dish. As the dishes are home-made, you might have to wait a little bit longer for your food to arrive than some fast casual spot, but it is well worth the wait. Service was excellent on two of my visits, but on one of my visits, service was rather slow, and the restaurant wasn't busy. Prices are reasonable for what you get, and some of the dishes are even excellent values, like the Paté. Infused Kreyol is a welcome addition to the area and I look forward to checking out more of their menu. I highly recommend you visit Infused Kreyol too.
Posted by Richard Auffrey at 3:00 AM