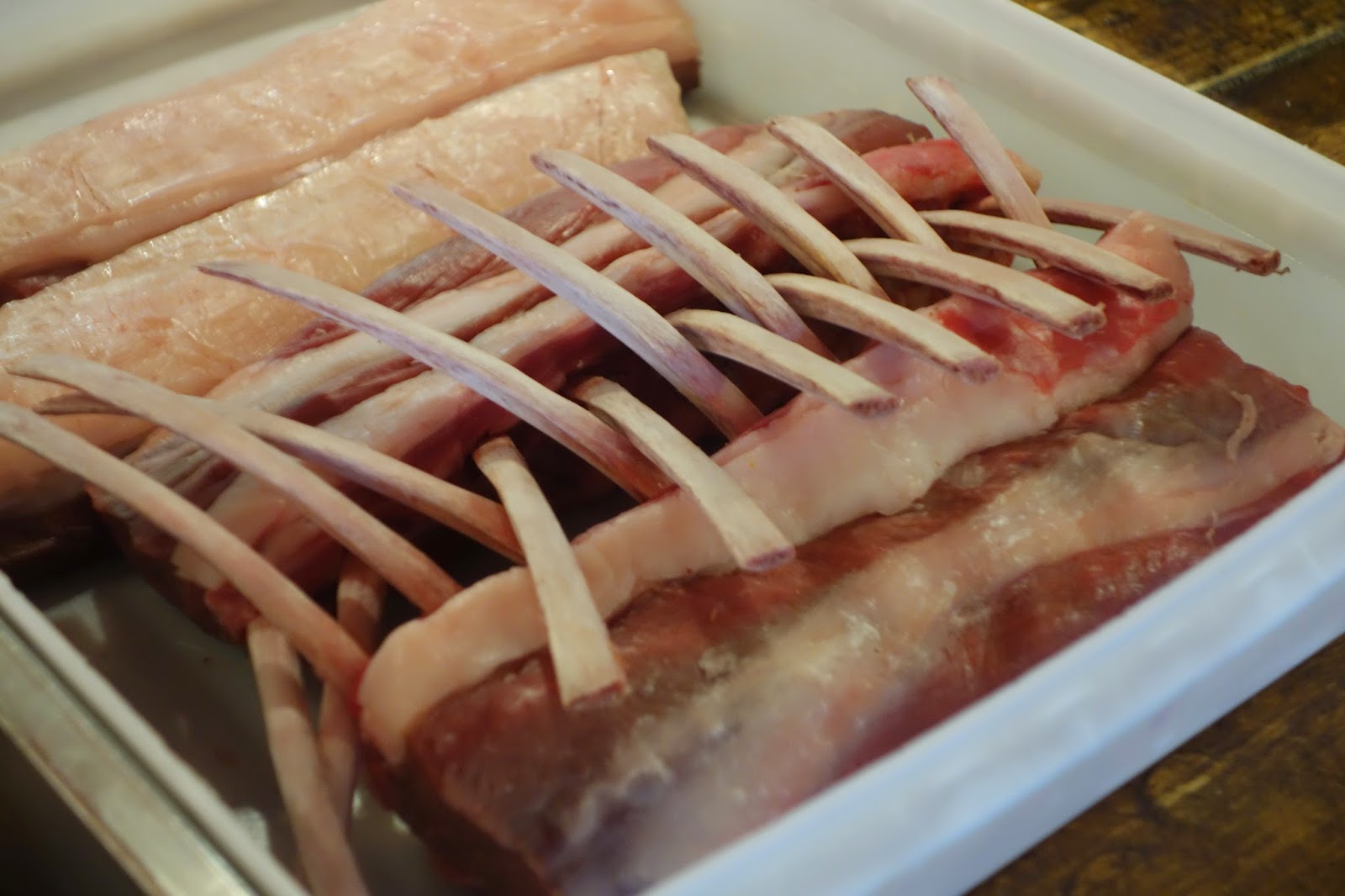 You might have enjoyed a Bloody Mary cocktail with a slice of bacon or even a chunk of lobster. Or maybe you've sipped a fine Pechuga Mezcal, where some type of meat (such as chicken, turkey, deer, goat, cow, pig, rabbit and even iguana) is used in the distillation process. You might also have seen bacon-infused bourbon or smoked salmon vodka. There is no shortage of people willing to blend meat and alcohol. In Asia, they have been using animal products in alcohol production for hundreds of years.

Some of the first mentions of "Lamb Wine" connected to China and the Tartars appear to be from Jesuit missionaries during the the late 17th and early 18th centuries. This occurred during the 61 year long reign of the Kangxi Emperor, the fourth emperor of the Qing dynasty. He was the longest reigning emperor in Chinese history and considered one of their greatest. The information on Lamb Wine is scant, and sometimes contradictory.

In The general history of China. Containing a geographical, historical, chronological, political and physical description of the empire of China, Chinese-Tartary, Corea, and Thibet by Jean Baptiste Du Halde (a French Jesuit), there is mention that the Chinese refer to "lamb wine" as Kau-yang-tsyew, and it might have originated with the Tartars. It is allegedly a very strong and nutritive drink but there isn't any information on how it is produced.

A General Description of China, Volume 2 by Abbe Grosier mentions that the Tartars make lamb wine, and that Emperor Kangxi used to drink it sometimes. Abbe also describes lamb wine, "It is very strong; but has a disagreeable smell. The same may be said of a kind of spirits procured from the flesh of sheep." It is interesting that there appears to be both a lamb wine and a spirit made from sheep. That distinction is mentioned in other references as well.

A New General Collection of Voyages And Travels Consisting Of The Most Esteemed Relations, Which Have Been Hitherto Published In Any Language: (published in 1747) stated that there is a strong spirit, made with mutton, which Emperor Kangxi enjoyed, though most other people, except for Tartars, felt it had a disagreeable taste. There is also a lamb wine, known as Kau-yang-tsyew, which is made in the Province of Shēn-si. It too is said to be very strong and have a disagreeable smell. None of it is exported outside the country.

In The History of Alcohol in the Far East - China, Japan, Philippines, Islands of the Pacific, by Emerson, Edward Randolph, there is mention of a spirit produced from sheep, and that the method of production is a unknown to Europeans. There is note that the alcohol originated with the Tartars, and a clear difference is delineated between lamb wine and the sheep spirit. Emperor Kangxi allegedly promoted the manufacture of lamb wine as it was one of his favorite drinks, though many other Chinese disliked it.

There is a question as to how the lamb wine is produced, as mentioned in China: Its Costume, Arts, Manufactures, &c, Volumes 3-4 by M. Bretin (1812). The book states, "...wine, which is made in the province of Chen-Si, and which is named Cao-Yang-Tsieou, or Lamb-Wine. It is not very clear how lamb's flesh can be employed in making wine." I'll also note this provides an alternative spelling to the previous term of Kau-yang-tsyew.

A U.S. newspaper even reported about Lamb Wine though they had little to add, except that it was apparently made with milk. The Evening Star (Washington, D.C.), February 18, 1912 published, "..., while another drink is 'kau-yang-tsyew,' or lamb wine. This is made from a young lamb and milk, and is said to be exceedingly intoxicating." The Tartars are also known for an alcoholic beverage called Kumiss, which is basically fermented mare's milk, so the use of milk in the "lamb wine" isn't much of a stretch.

There is an older source which provides more guidance and detail on the production of lamb wine, and which includes the use of milk. In Miscellanies: Stories and Essays, Volume 3 by John Hollingshead (1874), "The Mantchoo Tartars, for example, the conquerors of China, prepare a wine of a very peculiar nature from the flesh of lambs, either by fermenting it, reduced to a kind of paste, with the milk of their domestic animals, or bruising it to a pulpy substance with rice. When properly matured, it is put into jars and then drawn off as occasion requires, and it has the reputation of being very strong and nourishing. Whatever remains after supplying domestic wants is exported into China or Corea under the name of lamb wine. The Chinese term for this liquor is Kan-yang-tsyew, and it is as great a favourite with the emperors as sherry was with George the Fourth." This also shows that this version is merely fermented and not distilled, though there is other evidence of the distilled version.

In Beverages, Past and Present: An Historical Sketch of Their Production, Together with a Study of the Customs Connected with Their Use, Volume 1 by Edward Randolph Emerson (1908) we find that the lamb wine is distilled. "The Chinese are indebted to the Tartars for their kau-yang-tsyew or lamb wine. According to the tales of ancient travellers, the method of making this beverage, which is described as being pleasant to the taste and remarkably wholesome, was to dress a young lamb as for cooking, then by gently pounding the flesh gradually make it into a pulp. It is then placed in milk and allowed to ferment, after which it is carefully distilled. It is a very intoxicating beverage and its use is greatly restricted. At one time it was the favourite drink of the Emperors, but, on the whole, it cannot be said to have had the general indorsement of the people." It seems that based on the number of comments of the strength of the alcohol, it is possible the distilled version may have been the more common. If so, this is almost like a Chinese version of Pechuga Mezcal.

In India, they have their own versions of a Pechuga Mezcal-like drink, where they distill alcohol using the meat of various animals. In a source I already mentioned above, Miscellanies: Stories and Essays, Volume 3 by John Hollingshead (1874), there is mention of these spirits. "Of a similar description, perhaps, is the spirit made at Surat, denominated spirit of mutton, spirit of deer, spirit of goat, which derives its name from the practice of throwing into the still a joint of mutton, a haunch of venison, or a quarter of a goat." Surat is a large port city in India. It appears they use at least three different meats to make their spirits, placing them into a still like Mexicans would do to produce Pechuga.

Another source, A Book of Bombay by James Douglas (1883), adds some information about these spirits. "In 'addition to these, Grose tells us of three drinks which now burst upon the bibulous world of Bombay with astonishing effect. The three viands which now divided public attention were the spirit of Deer, the spirit of Mutton, and the spirit of Goat, to such marvellous ingenuity are men driven to invent new names for liquors to quench their thirst. These drinks were in great vogue, and the way they got their names was this: - A haunch of venison, a joint of mutton, or a quarter of goat was thrown into the vat when the arrack was being distilled, and while correcting its fiery nature, imparted a new flavour which was considered mighty fine. The blend of each at these spirits was different; every man had his favourite, some the one, some the other, the deer no doubt from its wild gout, outrunning the other animal spirits in the chase." It mentions the same three animals, though this time includes the nature of the spirit, arrack, a common alcohol in India and which can be made from a variety of ingredients.

Returning to China, the Uighur people of the Xinjiang region have their own wine-making tradition which may extend back to at least the 7th century, if not earlier. They produced a wine known as Museles, to which they add a variety of ingredients, from saffron and cloves, to pigeon blood, pigeon meat or lamb. The museles would also be aged for a couple months in ceramic vats. The Express Tribune, June 4, 2015 mentioned that the wine is, "Deep red, its unusual ingredients give it a pungent, musty nose and a sweet-sour, spiced taste, akin to a vermouth." The Uighur view museles more as a medicine than an alcohol. The Uighur still produce museles in their villages, and it is likely some still add animal meat or blood to their wine, though it isn't commercially available.

What are your thoughts on the addition of meat to wine or spirits?
Posted by Richard Auffrey at 7:06 AM