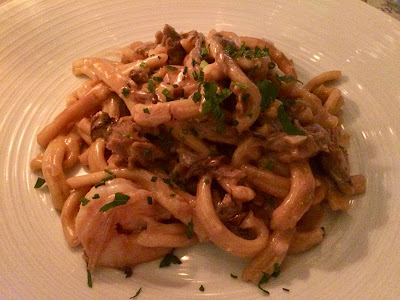 Sometimes you dine at a restaurant and enjoy an amazing new dish, one where every bite is sheer pleasure. You then soon return to that restaurant, to sample that dish again, hoping it is every bit as good as the first time you enjoyed it. This was my experience recently at the Island Creek Oyster Bar in Burlington.

While dining out one evening with family, and after enjoying a number of raw bar items and appetizers, I opted for the ICOB Shrimp Marsala ($28), which is made with Casarecce pasta, roasted mushrooms, and Marsala cream. I love a good Marsala sauce so wanted to see how ICOB's version would compare to similar dishes I've eaten.

The ICOB version is inspired by the cuisine of Sicily, the largest island in the Mediterranean. First, Sicily is famed for its red shrimp, the gambero rosso, which finds its way into numerous dishes. Shrimp thus ends up on numerous Sicilian dishes. Second, Casarecce (from casereccio which means "homemade") pasta originated in Sicily. Shaped like a narrow, twisted tube, the pasta is able to absorb plenty of sauce in its crevices. In Sicily, it is especially popular with pesto dishes, though it works well with heartier sauces too. So, the casarecce was a very good choice for a marsala cream sauce. Third, wild mushrooms, of a myriad of types, also grow well in Sicily.

Fourth, Marsala wine is exclusive from Sicily, possessing Denominazione di Origine Controllata (DOC) status, so that no other region can use that term. Marsala (which means "Port of Allah") is a Sicilian town and during the 18th century, the locals were growing some grapes and making wine for themselves. An Englishman, John Woodhouse, visited Marsala in 1770, and saw an opportunity in the export of wine from the region. Initial efforts were unsuccessful as the wine didn't transport well, so eventually the wine was fortified, to protect it during the long ship voyages. In some respects, it resembled Madeira wine, but was much less expensive, making it desirable to consumers in England. Today, Madeira remains a fortified wine, and may be either dry or sweet, made from a blend of indigenous grapes, such as Catarratto, Damaschino, Grillo, and Inzolia.

The ICOB Shrimp Marsala was absolutely delicious, a rich dish which was well balanced, the key to the dish's success. The creamy Marsala sauce wasn't overly sweet and the pasta, cooked perfectly, was an excellent vessel for the sauce. The plump shrimp, coated with the creamy Marsala, were exquisite and the roasted mushrooms added some earthiness and umami to the dish. It was comfort food, a hearty portion of Sicilian-inspired seafood.

A week later, I returned to Island Creek, yearning to sample the Shrimp Marsala again, hoping that the quality would be the same. I had little trepidation though as Island Creek has always been a consistently excellent restaurant, and it was that consistency which convinced me the Shrimp Marsala would still be as impressive. I wasn't disappointed in the least, reveling in the dish a second time, each bite of Marsala covered pasta, shrimp and mushrooms pleasing my palate.

This is certainly one of my favorite dishes of 2018 and I highly recommend it to everyone.
Posted by Richard Auffrey at 6:47 AM

I’m going to try this tonight!