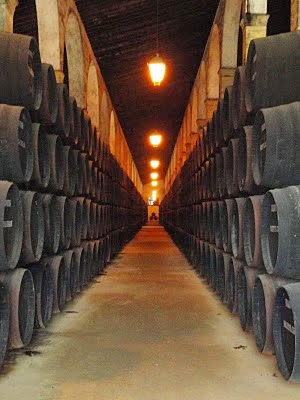 What is one of the tastiest, most intriguing, and unique wines that you are probably not drinking? It is most likely Sherry, a fascinating fortified wine from a small region of southern Spain.

As a long-term lover and fervent advocate of Sherry, I enjoy taking the opportunity, to spread my passion for this wine, to intrigue others to give it a try. Sherry remains a niche beverage in the U.S., and most of the Sherry imported into the U.S. is sweet. As such, many Americans have not encountered the myriad joys of dry Sherry. Even many wine lovers have little experience with dry Sherry. It is dry Sherry which is enjoyed the most in Spain, and there must be a very good reason for that fact. And due to reasons I'll explain in the near future, Sherry has been especially on my mind.

Sadly, Sherry sales have been on a decline in recent years but predications indicate it may be making a comeback. The IWSR, in their 2016-2021 Forecast Report, predicts that volume sales of premium Sherry will grow by 18%. As I've written in my history of Sherry, it is a cyclic wine, which has numerous ups and downs, and has always founds a way back up. So, I can easily understand why Sherry consumption could be on an upward swing.

Sherry education is essential to the promotion of Sherry consumption, to get more Americans exploring this intriguing fortified wine. Here are some items that hopefully will motivate you to discover more about Sherry.
Locally, Sherry is starting to get a little more visibility, albeit more in the form of Sherry cocktails. I enjoy such cocktails, but I would like to see more people enjoying Sherry on its own too. If you enjoy the flavors of Sherry in cocktails, then why not try the flavors on their own, without other flavors clouding the issue. Try a Fino or Manzanilla, an Amontillado or Oloroso. Or maybe even a Palo Cortado. And then you can move onto some Sherry variations such as En Rama.

The best place to enjoy Sherry is at Taberna de Haro in Brookline, which has over 60 Sherries on their list. Order a few tapas and get a flight of Sherries to compare and contrast. Chef/owner Deborah Hansen always has so many excellent and unique Sherries on her list. Whenever I drive by the restaurant, I nearly always have to stop for a glass of Sherry. Another restaurant with an excellent Sherry list is Tres Gatos, where you also can find some intriguing Sherries.

Stop missing out on the wonders of Sherry. Take a chance and order a couple dry Sherries, to taste something new. You can thank me later when you find a new favorite.
Posted by Richard Auffrey at 3:00 AM