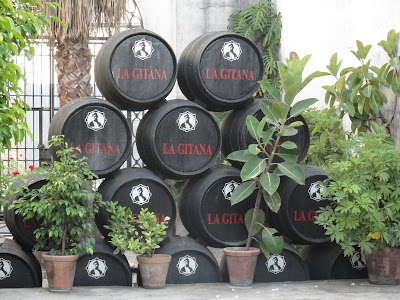 When I travel, I try to do my research, so I know something about where I will visit. When I received my preliminary itinerary for my visit to the sherry region, I learned about the bodegas we would visit. But our final itinerary, which I received on route to Jerez, had changed one of the scheduled bodegas, so I ended up without having done any prior research on Bodegas Hidalgo La Gitana. Fortunately, I knew a bit about the bodega as I was already a fan of their manzanilla. 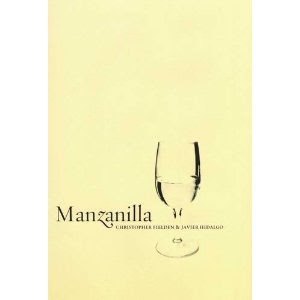 But the main item I failed to recall was that Javier Hidalgo, the winery owner and our guide on the bodega tour, was the co-author of a Manzanilla book I recently read and loved. It wasn't until we were visiting the bodega store that someone pointed out the Manzanilla book to me. Everything then came back to me. I bought another copy of the book so that Javier could sign it for me. I even bought a copy of the Spanish edition, as it came with photos and some additional recipes. This is a book I highly recommend! 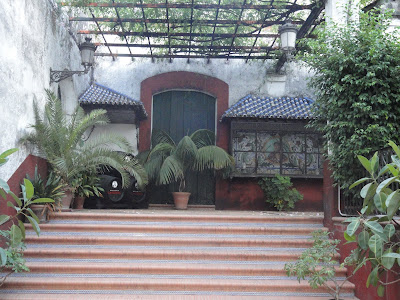 The entry way into this bodega is beautiful, with a couple cages of birds. The bodega has a lengthy history, having been established in 1792. Yet its roots extend back even further, to 1759 when Charles III assumed the throne of Spain. The King decided that Andalucia was an important element of his kingdom so he encouraged immigration to that region. One of the immigrants was Jose Pantaleon Hidalgo, originally of the province of Santander, who moved to the city of Sanlucar.

Jose purchased a small bodega from Roque Verjano and also married his daughter. In 1792, Jose's son, Don Eduardo Hidalgo Verjano, would then create the company which became Bodegas Hidalgo La Gitana. The Bodegas, located on the Banda de la Playa, was actually situated on the shore up into the 18th century. But, the river eventually silted up so that the shore moved away from the bodegas. Today, Bodegas Hidalgo continues to remain a family owned business. 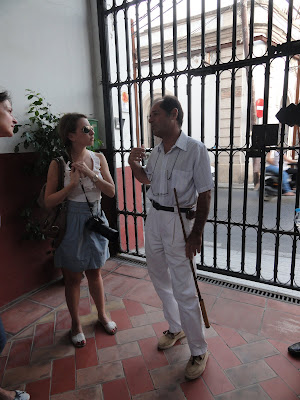 It was a bit disconcerting when we first met Javier Hidalgo, the owner of the bodegas. He seemed very distant and brusque at first, and we were unsure how the tour would go. Yet Javier soon warmed up to us and became much more personable. He is certainly very knowledgeable and more old school in his beliefs and ways. In addition, he is a man of multiple passions, more than just sherry. He is also an amateur jockey as well as an ornithologist. He also seems possessed of that famous Spanish pride, very proud, and deservedly so, of his sherries. 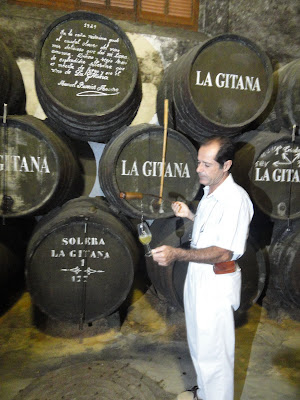 The bodegas contain about 10,000 botas, many over 200 years old, and Javier stated that "casks are very precious to us." They produce about 200,000 cases annually of sherry and brandy, though about 70% of their production is manzanilla sherry. Javier stated that according to the Spanish, manzanilla is the only feminine wine in the world. The popular style of manzanilla has also changed over time, becoming more "watery" and "lighter."

We tasted six sherries at Hidalgo, all from botas, and Javier used a bamboo venecia to extract samples. Bamboo is a more traditional materialfor this tool, and Hidalgo was the only bodegas we visited that used a bamboo one. We began our tasting with two manzanillas, La Gitana and Manzanilla Pastrana.

La Gitana means a "gypsy lady"and by one account, it refers to a gypsy barmaid who entranced Eduardo Hidalgo, the great-grandfather of Javier, and he named a manzanilla after her. La Gitana has 14 scales in its solera system, which is far more than many other sherries which may commonly have six or less. It is produced in a modern style, and is one of the lightest manzanillas on the market. This is the type of manzanilla preferred by Javier's wife. I have drank La Gitana before and have always enjoyed it. It is light, with a delicious and crisp taste and briny finish.

The Manzanilla Pasada Pastrana is produced in the old style, that which is preferred by Javier. It may be the only single vineyard manzanilla produced in Sanlucar, and the Pastrana vineyard is supposed to have the best albariza soil in the entire sherry region. Only 5% of the manzanilla produced by Hidalgo is Pastrana. The Pastrana is about twice the age of La Gitana, and is thus more mature. I have tasted the Pastrana before, and was previously impressed. Tasting it again, from a cask, was equally as compelling. It has more intense flavors and complexity than the La Gitana yet retains that briny character. It is a manzanilla I highly recommend. 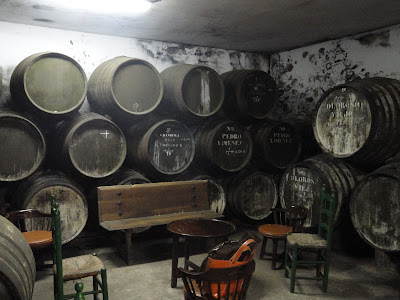 We then moved onto their VORS sherries. Combining his passions, a portion of the profits from sales of these wines are donated to the Imperial Eagle Conservation Fund, to help protect these endangered birds. A noble effort for a worth cause.

Hidalgo was the last of the nine bodegas we visited, a final stop on our fifth day in the sherry region. During those five days we had drank lots of sherry, both at the bodegas and with most of our meals, excluding only breakfast. You might think our palates were shot, that all sherry would start to taste the same, to run together in a blur. Yet that was not the case, and the VORS sherries of Hidalgo were outstanding.

The VORS Amontillado Viejo was a powerful sherry, with a complex and intriguing taste of almonds, caramel, vanilla and much more. Very smooth and with a very lengthy finish. The VORS Oloroso Viejo was equally as powerful, with a richer body, and more intense flavors. Both of these I would highly recommend, and certainly were a couple of the top sherries I tasted on the trip.

But it was the VORS Palo Cortado that was so exceptional it became my favorite sherry of the entire trip. Silky-smooth, with an incredibly diverse and complex blend of flavors, including butterscotch, caramel,vanilla, almonds and much more, some flavors being very subtle and elusive. A nearly endless finish which was addictive. A truly "Wow"wine, this should impress anyone. It was the perfect ending to an excellent journey through the sherry region.

I purchased a few bottles of the Palo Cortado and await sharing them with special friends, giving them a taste of my journey, as well as introducing them to the vast potential of aged sherry.
Posted by Richard Auffrey at 6:00 AM