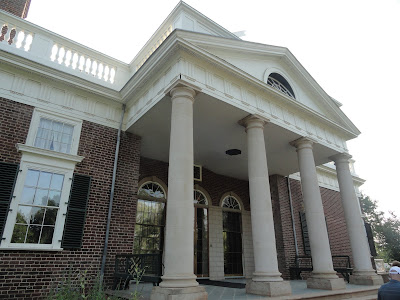 I saw a wine blogger spontaneously combust at Monticello.

On the surface, it sounded like a phenomenal event, a tasting of Virginia wines, accompanied by a lovely buffet dinner, upon the beautiful grounds of Monticello, the former estate of Thomas Jefferson. Such historical significance, a sense of kinship to one of this country's most famous wine lovers. The event was part of the Wine Blogger's Conference, a gathering of over 300 wine bloggers and wine industry personnel, being held this year in Charlottesville, Virginia. Each of the participating wineries was permitted to present one white and one red wine so there was plenty of wine to taste, an excellent opportunity to get some sense of the Virginia winemaking industry. 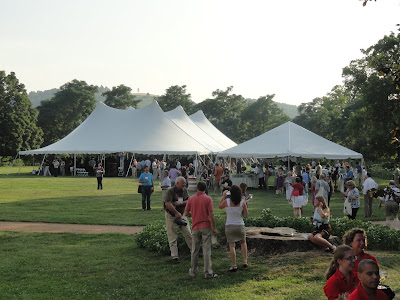 But, for me and others, this fantastic opportunity was ruined by intense temperatures.  Outside, it was at least 100 degrees Fahrenheit, an oppressive humid heat which sucked the life out of you, even with a short exposure. Drenched in sweat, it was impossible to conduct a fair tasting of the wines that were being offered. I had little interest in tasting the red wines, and even the white wines did not entice. There were dozens of wines that I failed to taste.  Neither the tent rooftops or the scattered fans were sufficient to ease the sweltering temperature. I had to leave the event early, unable to endure the weather. 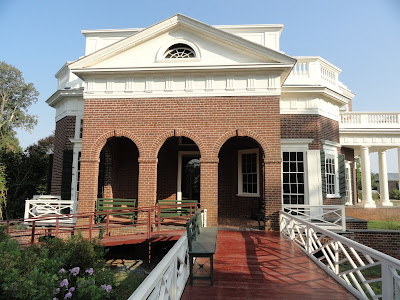 For at least a week before the Wine Blogger's Conference, we all were aware that the temperatures over the weekend could easily reach 100. So why hold such a large tasting event outside in such heat? It was not fair to the wineries as their wines obviously could not show as well as they should. From what I heard, and I don't have confirmation of such, there was a backup plan in case of inclement weather, which I assume might mean something like terrible thunderstorms. In that event, would it have been held inside somewhere? That would have made sense. So why wasn't the intense heat considered "inclement" weather, worthy of opting for a backup plan? 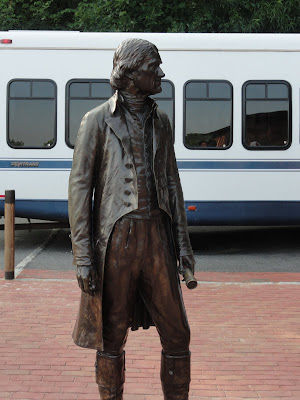 I believe the organizers of the conference dropped the ball in this matter. The extreme temperatures were not safe for the attendees, and had the potential to cause harm. Plus, these Virginia wines were ignored by a fair number of attendees who would have loved to taste them, but did not due to the brutal humidity. An alternative venue should have been chosen, and I think the organizers had sufficient notice to have done so. 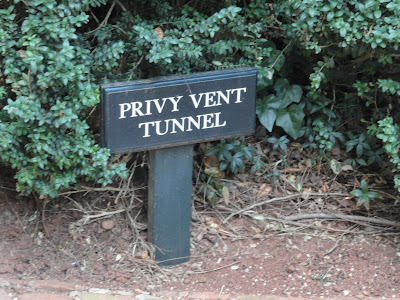 Yes, it is difficult to begin my coverage of the Wine Bloggers Conference with something negative, yet it was something that struck me very hard. What Virginia wines I had already tasted at the conference had been encouraging, making me intent with anticipation for a much broader overview of their wines. Being unable to do so was extremely disappointing and frustrating. And I know I was far from alone. Even some people who stated they enjoyed the event, did confess they failed to try most of the red wines.

I hope this is a lesson for the conference organizers for future events.
Posted by Richard Auffrey at 3:00 AM

I felt the same as you. I'm terrible with extreme heat and humidity and there were excessive heat warnings all week. I received my "welcome" glass of wine and that's all I managed to have. I was too miserable to move, so I found a seat at a table and sweated for two hours, only getting up for water, tea, and food. The next day I didn't make the winery tours, as the heat had done me in.

Well said (and I have similar remarks in the blog post I'll be putting up today about the conference). The Monticello debacle was the most horrific winetasting event of my life, by a wide margin. When they flashed a picture of Monticello on the screen the following night at the so-called awards dinner, it gave me PTSD shivers.

Richard - I read your comments. There's no doubt the heat was oppressive. The inclement weather plan was for rain, not heat. No one saw the heat reaching as high as it did with enough time to move an event for 350 people to a diffent venue. That day broke an 11 year record for heat in the Charlottesville area. The inclement weather plan moved the event uncover, but not indoors so it would not have resolved the heat factor. Lesson learned with outdoor events. The wines that were showed at the event were standout wines, I hope you will give them another chance at another time.

That's unfortunate that your feedback is so negative. I actually thought the event went really well - and afforded me a great opportunity to try great wine, great food in a beautiful/historic setting. An opportunity rarely afforded to the public. Yes, it was hot - but come on, you can't put the West Lawn of Monticello indoors. Cut them a break Passionate Foodie, Beth and Richard.

Overall the conference was very positive and although it was very hot, it was part of a heatwave that swept over the entire East Coast in a matter of days - not a lot of time to move 350 people around, especially since Monticello does not have an indoor venue for such a group. That being said, hindsight is always 20/20. I hope despite the heat, which is out of everyone's control, that you are able to find something positive about the conference and Virginia wines to share with your readers.

Hi Annette:
The news reported that a week prior to the event that temps were likely to reach 100. As such, the organizers had at least a week to consider a potential alternative. I would love to have another opportunity to taste the wines. I have generally enjoyed the VA wines I tasted during the rest of the conference, so was very unhappy that I missed tasting the wines at Monticello.

Hi Beth & Richard,
It was more than hot. It was sweltering and oppressive, and no one could properly assess the wines with such heat. The event had plenty of potential, and could have been great, but with such high heat and humidity, it was a failure. When people feel ill during an event, it is clearly not a success.

Hi Tamra:
As I mentioned already, the organizers had at least a week warning that the temps were likely to hit at least 100. Some kind of alternate plan could have been put into place. I did have positive experiences at the conference, and I will be posting about them in the near future.

I agree 100% with Richard's main point: we missed the opportunity to taste dozens of Virginia wines because we could not adequately evaluate them in the forum created for us. Honestly, I don't think it would have been a lot better if the temperatures were their normal hot. I feel bad for the winemakers whose wines I was unable to try and with whom I could not interact because of the heat. I know that many people put enormous effort into the event, and I am disappointed that it turned out this way despite their best intentions. I will have more to say eventually on my blog.

Luckily for you, my friend, it is quite lovely in Portland come August (well, really, year round, but don't tell anyone I said that!).

Respectfully disagree, Richard. I think too much would be lost if the event was moved away from the beauty (and regional significance) of Monticello. Unfortunately, this one may have been a lose-lose for the organizers, no matter where it was held. I blame meteorologists.

I had a great time, but that must've surely been influenced by my growing up in the Georgia heat/humidity :)

On a lighter note, Diane Flynt's Foggy Ridge Cider was pretty dang refreshing in that inferno. But- you're right- I did not try many wines.

Hi Joe:
I understand the desire to have the event at such a historically significant location as Monticello. But, there was a significant tradeoff involved too, that the VA wines at the event received little attention. Even you admitted you did not try many of the wines.

I am not sure that was a good tradeoff, for either the wineries or the bloggers.