The Center for Wine Origins has declared that today is Port Day, a celebration of this unique fortified wine from Portugal. As part of my own observance for this day, I wanted to present some reviews of Ports that I recently tasted at the Boston Wine Expo. Each year at the Expo, there are usually at least a dozen Ports, from several different producers, available for tasting so it is a good opportunity to learn about this fortified wine. It remains an under appreciated wine, but there is hope that interest in Port may be growing. 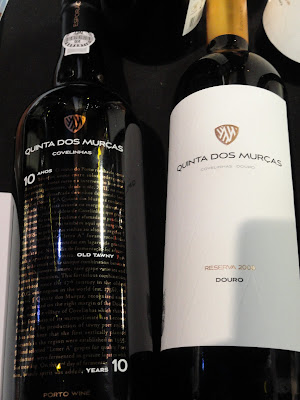 Wine tasting can be tricky as so many factors can be involved which will affect your thoughts on a wine. Bottle variation, the setting of the tasting, food pairing (if any), your mood, and so much more. There are times that a wine might not impress me but which will seem so much better at a different tasting. That is why retasting wines can sometimes be beneficial, especially if the first tasting was done under less than ideal circumstances. I experienced just such a case at the Boston Wine Expo.

I am a fan of the wines of Herdade do Esporão and most recently had attended a wine dinner at Harvest that showcased some of their wines, including the 2008 Quinta dos Murças Reserva Red, which was also at the Expo. I retasted it at the Expo and was still as enthralled with it as at previous tastings, and it had even made my list 2011: Top Ten Wines Over $15. Last summer, while at a Le Cirque wine dinner, I tasted their Quinta dos Murças 10 Year Old Tawny Port which I enjoyed but it did not impress.

But when I tasted it once again at the Expo, my feelings changed and I marveled at the quality of this Port. Personally, I find many 10 Year Old Tawnies to be too harsh for my preferences, yet this was not the case here. In fact, it tasted much more like a 20 Year Old, smoother and more complex, with delicious flavors of almonds, caramel, dried fruit, and a mild sweetness. It was one of my favorite Ports from the Expo and certainly the one which most surprised me. Later in the day, I returned to the table for another tasting of the Port, but this time with a Blue Cheese Flan from Sandrine's Bistro, and it was an excellent and classic pairing.

Can I pinpoint the reasons why the Port had not impressed me last summer? No, I cannot. Maybe it just didn't pair as well with the dessert. Maybe I had been simply overwhelmed with all of the prior wines and food. Maybe there was bottle variation. All I know for sure is that my feelings about the Port were very different this time. Has anyone else tasted this Port, and what did you think about it?  And if you are going to try it, I would highly recommend pairing it with some blue cheese. 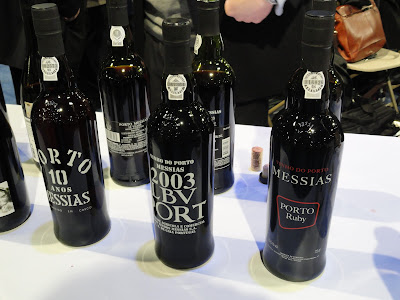 Cave Messias, located in the Bairrada region of Portugal, was founded in 1926 and produces a variety of wines from Dão, Bairrada, Douro, Vinho Verde, Beiras, Terras do Sado and Vinho do Porto. At the Expo, I tasted three of their Ports, and they present good values and would make for a nice introduction to the realm of Port wines.

Their Ruby Port (about $10) offered plenty of ripe red fruit flavors, especially cherry and raspberry, and was smooth and easy drinking. A nice choice for a chilly winter's evening. The 2003 LBV Port (about $15) presented more complexity, plenty of delicious red fruit flavors, but also some intriguing spice notes. It was smooth and presented a lengthy, satisfying finish. An excellent value at this price. The 10 Year Old Tawny (about $23) was ok, but too harsh for my preferences. 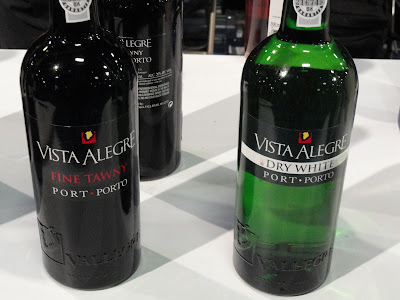 The Vallegre-Vinhos do Porto is a relatively modern company yet the roots of the Quinta extend back into the 18th century. They own about 55 hectares of vineyards and some of the vines are over 80 years old. They produce a full line-up of Ports and showed four of them at the Expo.

Their Dry White Port (which seems to have been the only White Port at the Expo) is a blend of numerous Portuguese grapes you may never had heard of before, including Viosinho, Malvasia Fina, Gouveio, Arinto, Cercial and Rabigato. The Port had a yellow/tawny hue to it and though it is labeled as Dry, does contain some residual sugar, and I tasted a bit of sweetness. It offered flavors of salted nuts, mild spices and even a few floral notes. An intriguing taste and worth checking out.

The Fine Tawny has about five years of ageing and had a very alluring nose, such a compelling smell. It was fairly smooth and there was a nice complexity to its taste, a harmonious blend of ripe red fruits, some dried fruit, and spices. A nice structure, a lengthy finish and just a pure delight to drink. I would strongly recommend this Tawny. 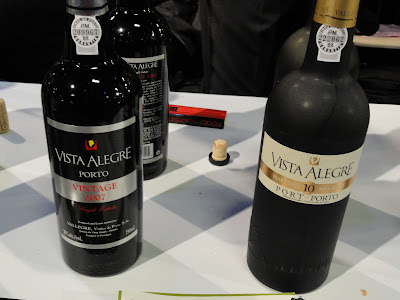 The 10 Year Old Tawny didn't impress me, for all the usual reasons. It is certainly not a bad wine, just doesn't fit my personal preferences. On the other hand, the 2007 Vintage Port both surprised and pleased me. The Port is produced the old fashioned way, by people trodding upon the grapes in concrete lagares. I was concerned because this is a relatively young Vintage Port, which I wasn't sure was ready to drink. But, that turned out not to be the case and it drank very well at its young age. It had a dark red color with an enticing nose of red fruits. On the palate, there was a moderately complex blend of flavors and it was rather smooth, with mild tannins. You could easily enjoy this Port now, though I think that some ageing will benefit it as well. Since the tasting, I have skimmed through a recent Port article which seems to indicate that more Vintage Ports are being produced that are ready to drink upon release, though which will age well too. 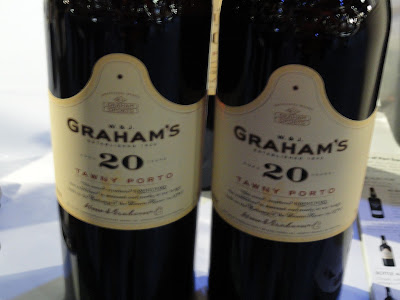 Graham's is a very known Port producer and I have previously tasted a number of their Ports, several which were showcased at the Expo. I had though to retaste their 20 Year Old Tawny, which is a superb example of this type of Port. Its alluring nose will compel you to simply sit and sniff it for awhile, enjoying the aromas almost without a need to taste it. But you will be compelled to drink it, to savor the taste. On the palate, the smooth flavors will seduce your mouth, a luscious and intricate melange of caramel, nuts, toffee, honey, dried apricot and more. A very lengthy finish completes this impressive Port and I highly recommend it.

So what Ports do you recommend?
Posted by Richard Auffrey at 4:00 AM