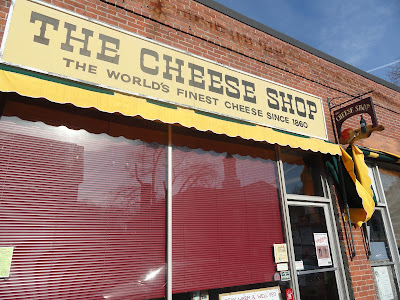 Restaurants, wine shops, and other stores can sometimes drastically change over the course of 2-3 years so it can be a worthy endeavor to revisit them time to time, to evaluate any potential changes. That was one of my goals for this year, to revisit some places from the past, and update my thoughts on them.

Almost four years ago, in March 2008, I wrote a brief review of The Concord Cheese Shop and now I am back with a longer update, as well as numerous photos of the store. In some respects, the store is the same, but that is largely a positive as what they did then still works very well now. In essence, they are a shop for cheese, wine, sandwiches and other assorted food products. They also carry mainly artisan and quality items, from boutique wines to unique cheeses. It is a gourmet mecca and I continue to highly recommend it. 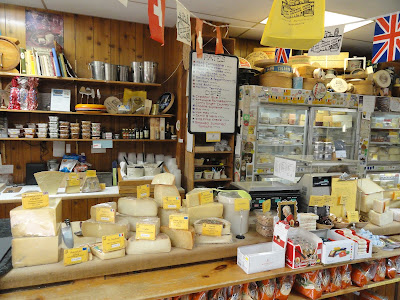 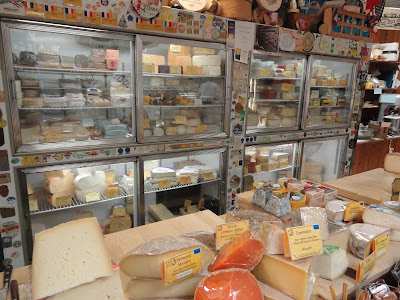 Let us start with the store's namesake: Cheese. They have a huge and diverse selection of local, domestic and imported cheeses, including many small production and unique cheeses. Local cheeses are one of their specialties. If you are a cheese lover, I am sure you will find at least several cheeses unfamiliar to you which you will want to try. Right now, their blue cheeses are being promoted, and they usually carry at least 15 different ones. One of their newer selections is Xavier David brand Roquefort, which has been produced in the Causses region since the 9th century and was eaten by King Charlemagne, and was named France’s first AOP in 1921.

To accompany your cheese, you will find plenty such as Iggy's breads, and a variety of pates, including wild boar, venison, salmon terrine and duck mousse. There are also numerous dips, such as cheddar blue, king crab creole and smoked sundried tomato. If you are having a party, this is an excellent place to stock up on what you need. 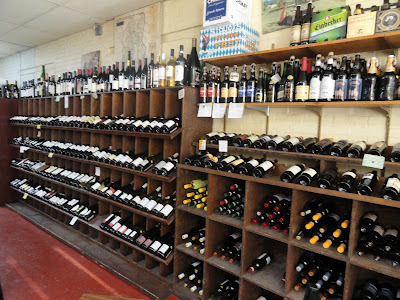 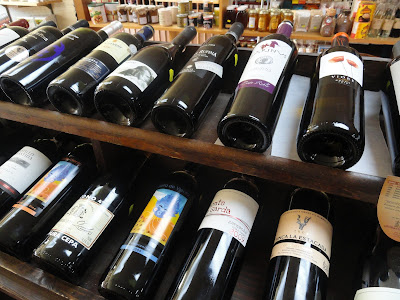 To accompany their cheese, they have a fine selection of wines, a few hundred bottles at least, with plenty of diversity, including many more artisan wines, that also covers the gamut of price points. Prices are competitive with other boutique wine shops. They also carry hard cider, mead, artisan beers and artisan sodas. Some local producers are represented, including my favorites like Turtle Creek and Still River Winery. I learned that Still River now produces a Sparkling Apple Ice Wine, though it is pricey at $16.99/187ml or $64.99/750ml. Wine lovers will have fun perusing the shelves for intriguing wines. 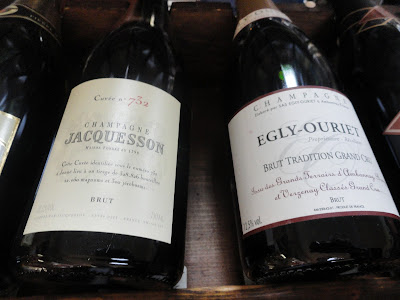 Beside champagnes from the larger Houses, they also carry some interesting Grower Champagnes (and my readers know I am a huge fan of Grower champagnes). 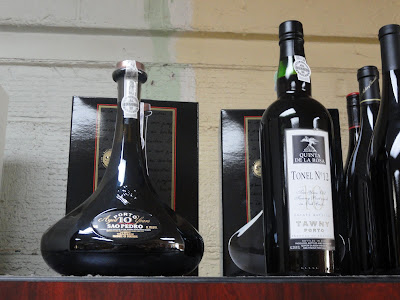 You'll find a selection of Ports, Sherry and Madeira, including numerous Sherries from Lustau. Yes, more wine types that I rave about. 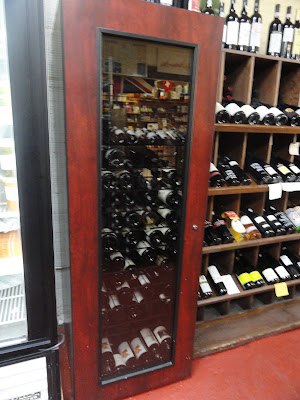 There is a temperature controlled cabinet which has their higher end and collectible wines, for when you want to splurge on yourself or someone else. 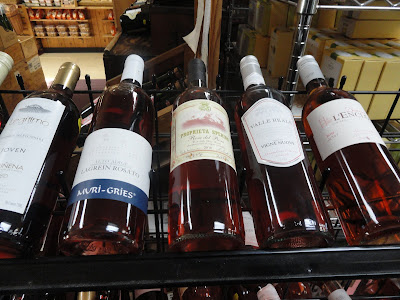 I have mad respect for any wine store that carries at least seven 7+ Rosé wines during the winter. Most stores either completely eliminate their Rosé wines during the winter, while others may only carry one or two. I believe Rosé is not merely a summer wine, and you can and should drink it year round. It is very versatile with food and would be a good accompaniment with numerous winter meals. Thus, kudos to the Concord Cheese Shop for promoting Rosé year round. 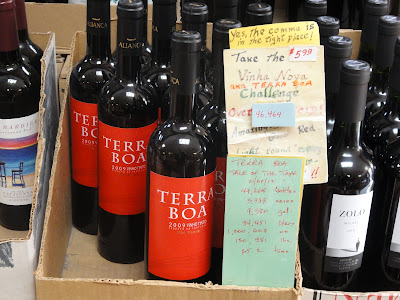 For years, the shop has been promoting a very inexpensive Portuguese wine, the Terra Boa ($5.99), current vintage being 2009. The wine originally started out at $4 a bottle, and was $5 in 2008.  As of 2008, they had sold over 35,000 bottles and now, as of February 2012, they have sold 41,268 bottles. They challenge their customers to buy the wine, and if that person does not like it, they will give them their money back. As of 2008, only one person had ever returned the wine. Kudos again to the shop for promoting a value Portuguese wine. 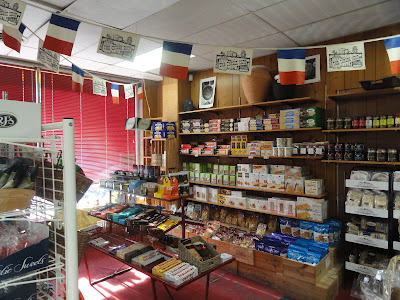 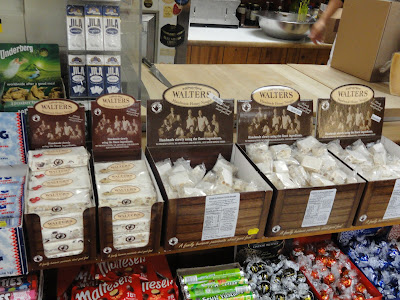 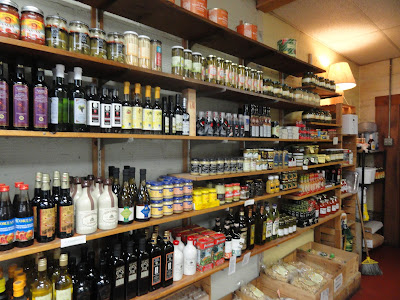 Cookies, crackers, chocolate, candy, coffee, teas, sauces, dips, oils, and so much more can be found here. For example, they carry ten kinds of honey. A number of their products are imported from all across the world, from South Africa to Britain. There are plenty of tasty choices, perfect additions to any dinner, party or  feast. 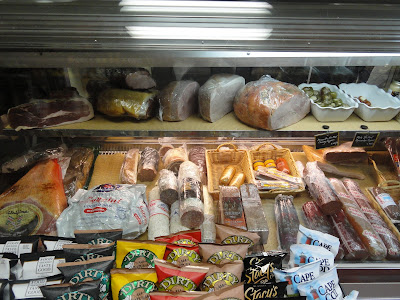 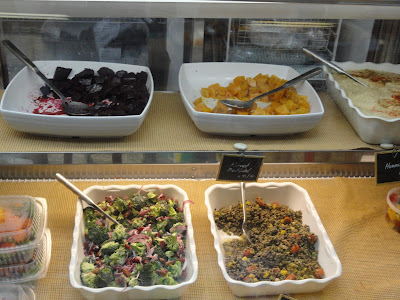 For lunch or dinner, you can also find plenty of takeout options, from soups and stews to salads and vegetables. There are also desserts, such as cheesecake and tiramisu. In addition, you can get special sandwiches, such as the Little Piggy, Black Stallion and Rosemary's Baby. For example, the Rosemary's Baby is made from Tuscan Rosemary Ham, Piave Cheese, Balsamic Glaze and Lettuce. If you do not see something you want on their sandwich list, you can also create your own, choosing your own Bread, Cheese, Meats, Veggies and Spreads. They even have several tables where you can sit and enjoy your lunch.

Food and wine lovers should definitely make a stop at the Concord Cheese Shop and explore the diverse bounty they have to offer.
Posted by Richard Auffrey at 4:00 AM

I LOVE this place! Well, I would love it, if I was in Concord! I love the almost General Store ambiance! I don't think I've seen so many cheeses in one location! thanks for sharing...I know where I'll be heading if I'm ever in Concord...it's a little far from Spain...Cheers, Ashleigh, The Drinking Girls

Cause and Effect said...

Kudos for bringing attention to this Concord gem. The world would be a better place if every town had a shop like this.

A little late to the party, I suppose, but I see at least the Chimay bottles in one of the photos and not one comment about beer at the store. I know, wine drinkers and scotch drinker look down on beer drinkers. That's ok--scotch is just distilled beer.

Shadowfox:
I don't look down on beer drinkers. Beer is simply not one of my preferred drinks. The bitterness of the hops doesn't appeal to my palate. Thus, my coverage of beer is limited.