“Simplicity is the glory of expression.”
--Walt Whitman

Sometimes we take the simple for granted, desirous of the more complex, the more intricate and involved. With food, simple dishes often get ignored in favor of more complicated and sophisticated meals. Comfort food, which is usually a simple meal, may be savored but often does not receive the same respect as haute cuisine. The Japanese seem to better understand the value, and even beauty, of simple cuisine. With excellent ingredients and proper technique, a simple meal can be elevated, worthy of adulation. Revel in simplicity and seek out that beauty within. 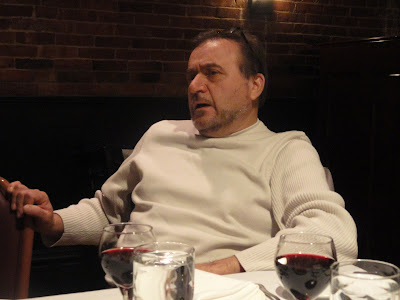 "Simplicity is Beauty and Beauty is simplicity, nothing more, nothing less."
--Oscar Wilde

Nestled on Hanover Street, closer toward the water, is Lucia Ristorante, a more old school Italian restaurant which opened back in 1977. At that time, the North End was far different than it is now, with far fewer restaurants and Lucia has seen great changes in the North End over the years. Donato Frattoroli (pictured above) and his older brother, Filippo, who both are originally from the Abruzzo region of Italy, had previously owned an Italian restaurant in East Boston but when it closed, they decided to open another place, this time in the North End. Lucia proved to be successful and they eventually opened a second restaurant in the suburbs, in Winchester, in 1986.

I have dined several times at their Winchester location, usually ordering the pizza which I think is some of the best in the area. But I previously had not dined at their North End location so was eager to check it out when I received an invitation to attend a blogger dinner there, a meal centering on polenta. At the dinner, I sat near Donato and Antonio, the General Manager, and found them both to be gracious, down-to-earth and and very personable individuals. They freely answered our questions, and were very upfront about their restaurant and cuisine. We even got a peek into their kitchen, the inner sanctum.

Some might consider Lucia Ristorante to be dated, an old style restaurant which needs to be transformed into something more modern, but Donato made it clear that they are satisfied with their restaurant and its offerings. They have many long-time customers who visit regularly, seeking specific menu items. In addition, they have a significant tourist traffic, especially in the summer, when up to 75% of their customers can be tourists. They are certainly not hurting for business in the very competitive North End so whatever they are doing is working well for them. Lucia is a family business and Donato hopes that his children and other family members will continue to carry the torch. This year, Lucia celebrates their 35th anniversary, and the hope is that it will celebrate many more. 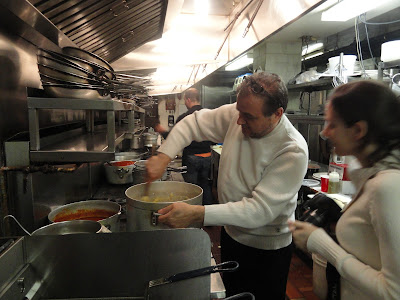 “Beauty of style and harmony and grace and good rhythm depend on simplicity.”
--Plato

Our main chef for the evening was Pino Maffeo, who usually works at the Winchester location. Pino graduated from the Newbury Culinary College in 1991 and after graduation worked at a number of restaurants around the country. In 1996, Chef Maffeo returned to the Boston area to work at the acclaimed Sage restaurant though three years later he would leave for New York City. He then began working with famed Chef Patricia Yeo at her muchly lauded restaurant AZ and later at her second restaurant Pazo. But Boston called once again, and in 2003, he returned to work there, first at Restaurant L and then Boston Public. Finally, in 2009, he started as Executive Chef at Lucia Ristorante in Winchester.

Pino possesses an impressive culinary resume, and also has an interest in Japanese cuisine and Sake, so it was fascinating to spend a little time chatting with him, especially about my opinion that Italian cuisine and Sake can pair very well together. For our dinner, Pino prepared a simple meal rather than some fancy, high-end Italian dishes. With good ingredients and excellent technique, this simple dinner was extremely satisfying, excellent comfort food for a chilly winter evening. 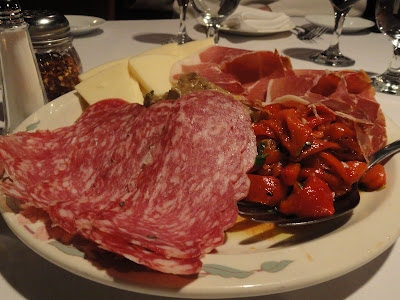 "In character, in manner, in style, in all things, the supreme excellence is simplicity.”
--Henry Wadsworth

We began with an Antipasto Plate containing Prosciutto di Parma, Sopressata, Provolone, Roasted Peppers and Marinated Eggplant. Silky prosciutto, sharp provolone and more were a nice start, with an appealing presentation, a nice freshness and a good taste. 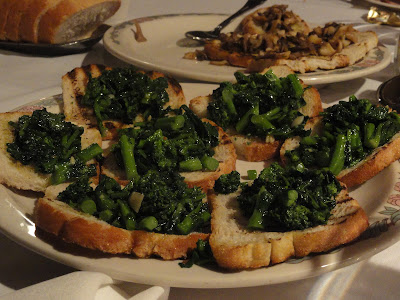 Next up was some Bruschetta, one variety topped with mushrooms and the other with broccoli rabe. Another simple dish, grilled bread with flavorful, earthy toppings. I would have loved a glass of Sake with the mushrooms, which would have enhanced that savory taste of umami. 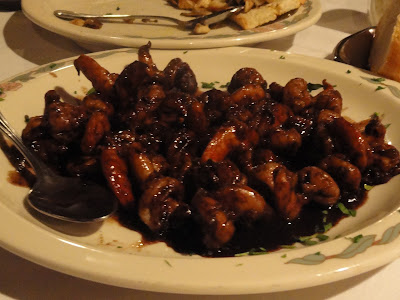 "I adore simple pleasures. They are the last refuge of the complex."
--Oscar Wilde

The Balsamic Glazed Sautéed Shrimp is not a traditional Italian dish, but is more a simple experiment, an attempt to make a dish reminiscent of Chinese food. Well, it was a successful experiment in multiple ways. It not only reminded me of a sweet and sour Chinese shrimp dish but also was quite tasty with good-sized, tender shrimp. The sauce was sweet without being cloying, and there was a pleasant balance of some tartness. I eagerly devoured a fair number of these shrimps. 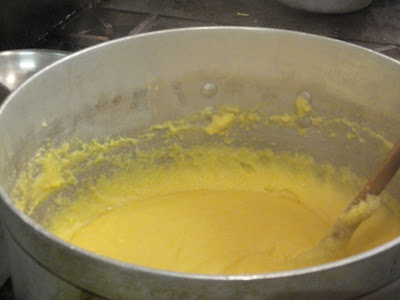 Our main entree was Polenta, which is essentially a peasant dish of milled corn and water which can be found throughout northern Italy, including Abruzzo. Above, you can see the pot of polenta as it was being cooked in the Lucia kitchen. Though a simple dish, it can be found in numerous variations, such as coarse grain, fine grain, thick or thin. There is also a darker, historical side to polenta, as it was responsible for an endemic and deadly disease during the 18th century in Italy. Some peasants ate polenta almost exclusively, rarely eating meat, because it was so inexpensive and filling. But, corn lacks vitamin B3 (niacin) so the constant polenta consumption led to some peasants being afflicted with pellagra, also called the "sickness of the rose" and "Italian leprosy."  It was eventually realized that they needed to add some proteins to their diet, and not just eat polenta, to avoid this illness.

It is also interesting to note that the term "polenta" sometimes is used to replace the term "Madonna" in exclamations and curses because you are not supposed to take the Madonna's name in vain. 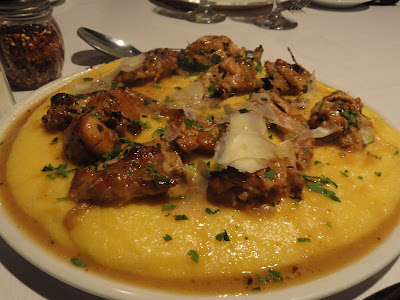 I began with the Abruzzo Style Polenta topped by Braised Rabbit with Truffles. The polenta was moist and firm, with a strong corn flavor and it absorbed the juices of the toppings. The rabbit was delicious, tender and flavorful, with a nice earthiness from the truffle. I am a huge fan of rabbit so this dish really appealed to me, though I was not keen on the fact that there were some bones in the rabbit. I think that was a small distraction from the tasty comfort food. 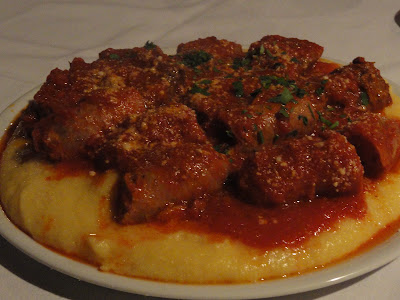 I also had a hearty slice of Abruzzo Style Polenta topped with Braised Shortrib and Sausage in a red sauce. The polenta was consistent with the other one, and the toppings here were quite satisfying, again the meat being tender, spiced well and scrumptious. A very hearty dish, this is the epitome of simple and enjoyable comfort food. I couldn't really choose a favorite between the two polenta dishes as each had their own unique strengths. 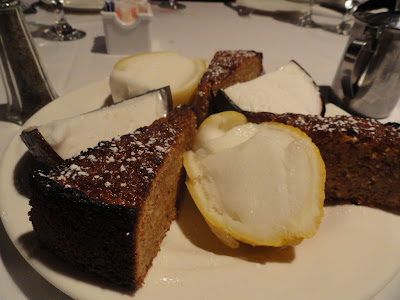 “The simplest things are often the truest.”
--Richard Bach

Though my belly was full of plenty of polenta, I found a little extra room for dessert. The Coconut and Lemon Sorbetto, served in rinds, was creamy and good but it was the Hazelnut Cake, drizzled with creme anglaise, which really impressed me. The cake is supposed to be unique to Lucia, and was moist, dense and possessed a delightful nutty and sweet taste. An excellent ending to this simple dinner.

“Everything should be made as simple as possible, but not simpler.”
--Albert Einstein

Despite these dishes being simple, they did not have a one-note taste. They possessed a complexity of flavors which elevated them to a higher level, which provided a beauty to their simplicity. Chef Maffeo and his staff did an excellent job preparing these dishes. If they can prepare these simple foods so well, it bodes well for the rest of the menu too.

For me, the only misstep during this was the choice of wine, a Puglian Sangiovese. I love the Sangiovese grape, which is a key component of Chianti and other Italian wines, but this particular wine was too simple, too much of a singular flavor. Inexpensive wines don't have to be that way, and can possess an element of complexity, which would have better complemented our dinner. Sometimes, being too simple is a flaw, when the flavor itself is monotone and boring.

Service was very professional and well done. It was a fun evening, with plenty of interesting conversation, some education and plenty of laughs. Lucia Ristorante would like to hold small, family-style dinners like this in the near future, featuring polenta and other items, and I think that would be a great idea. I think I also need to return soon to their Winchester location, and maybe check out more items from their menu. Seek simplicity.

“Simplicity and repose are the qualities that measure the true value of any work of art.”
--Frank Lloyd Wright

very well written post! I learned even more facts than I did at dinner.

I've been back already with a large group and everything was just as fantastic. I wish they would add polenta to the regular menu!