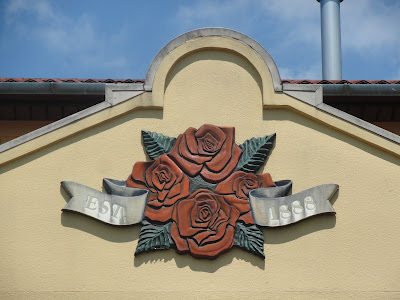 "Four Roses straight up, water on the side."
--Detective James "Popeye" Doyle (played by Gene Hackman) in French Connection II

After long days of exploring the Chianti Classico region of Tuscany, our group often met for a final drink at the hotel bar, to unwind a bit before heading off to bed. My drink of choice was Four Roses Bourbon, one of the roughly 6 or 7 bourbons they carried. In Europe and Japan, Four Roses is extremely popular, and has been for years, but it is still very much under the radar in the U.S. That should change with time, once people realize its quality and uniqueness.

Back in August 2011, I met the Four Roses Master Distiller, Jim Rutledge, at a local media event. He was personable and quite knowledgeable, and his bourbons were quite compelling. My previous article, Four Roses Bourbon: Back In The U.S.A., discussed the history of the distillery as well as providing plenty of additional information about bourbon and tasting notes on the three primary products of Four Roses. You might want to read that article first, for background details, before proceeding with the rest of this post. 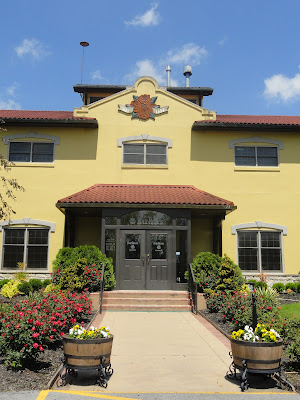 When planning my visit to Louisville for the Kentucky Derby, I knew that I had to visit a couple of nearby bourbon distilleries and Four Roses was one of the places at the top of my list. They run frequent public tours and there were five other people on the tour I attended. It began with an interesting fifteen minute video about the distillery and bourbon, though I caught one error. The video stated a couple times that "white oak" barrels must be used to age bourbon though according to the law, any type of "new oak," and not just "white," is permissible.

After the video, our guide, Don, led us through a tour of the distillery. Distillation operations had been shut down for the summer, giving them time to perform maintenance. Thus we didn't get the chance to view any work in progress. It is common practice for bourbon distilleries to close during the summer as the heat gets too intense for work. For Four Roses, the water table from the nearby river also decreases, making it more difficult to operate. Four Roses though closes earlier in the season than many other distilleries. 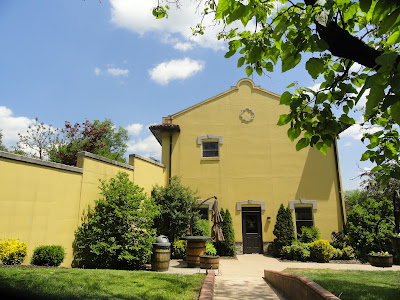 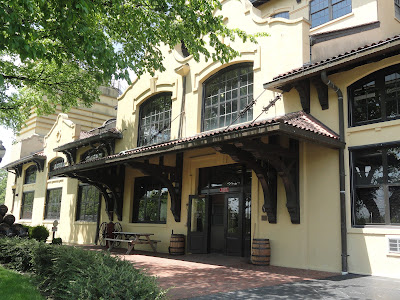 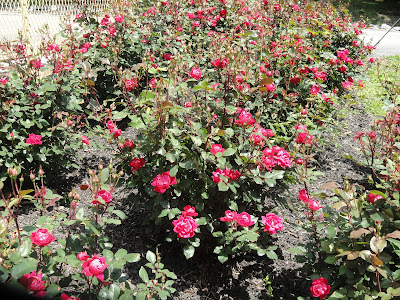 Yes, they even grow roses on the grounds. 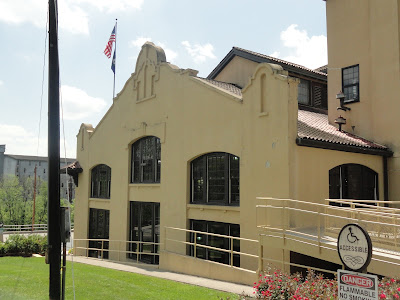 In the picture above, there is a multi-story building visible in the background on the left side of the photo. That is one of the former Four Roses' rack houses, where bourbon barrels were stored, but that is no longer the case. Instead, other distilleries use those rack houses for their barrel storage. At a different location, Four Roses has about 20 warehouses, each on an acre of land, and there are approximately 24,000 barrels in each warehouse. At any one time, the distillery has about 300,000-350,000 barrels aging in these rack houses.

So why did Four Roses stop using the older rack houses? They decided that they wanted to age their bourbon barrels in single-story warehouses, to allow for more even aging throughout the rack house. In multi-story buildings, the barrels on different levels will age at different rates as the higher levels get hotter than the lower ones. To avoid this, some distilleries will rotate their barrels though that is laborious and time consuming. Blending can also compensate for the discrepancies in aging. Four Roses though avoids worrying about this as their barrels generally age consistently together. 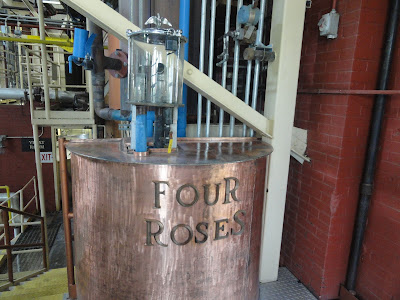 Four Roses mills all of their own grains, bringing in whole kernel corn, and they seek corn which swells just right for their purposes. They use two different mashbills, grain recipes, including the OE (which is 75% corn, 20% rye, and 5% malted barley) and the OB (which is 60% corn, 35% rye and 5% malted barley).  These recipe are at least 40 years old, and the rye is intended to add richness and spiciness to the blend. 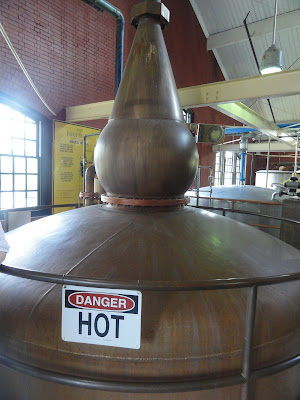 Besides the two mashbills, they also use five different, proprietary yeasts, thus making 10 different recipes. They are probably the only distillery using more than one yeast, and acquired four of those yeasts once Seagram shut down business. The five yeasts include: V=delicate fruitiness, a classic bourbon profile; K=slightly spicy, slow aging, also a classic bourbon profile; O=rich fruitiness, red fruits; Q=floral essence, delicate, aromatic; and F=herbal, minty, little floral. So each combination of mashbill and yeast will lead to a different flavor profile, providing a wider range of flavor profiles than many other distilleries can create. They sometimes even combine a couple of yeasts for another flavor profile. 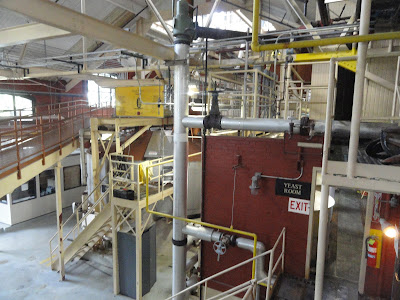 The distillery is highly automated and it only takes about five men to operate. Once a batch of bourbon is completed here, it will then be transported to one of the rack houses. 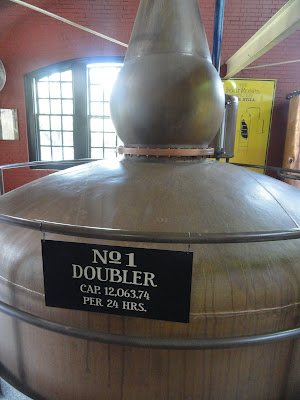 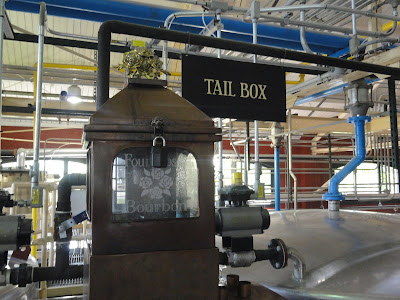 The facility has 23 fermenters, 16 made of Red Cyprus and 7 stainless steel. Red Cyprus is now a protected tree so they cannot produce any more cyprus fermenters. It is a flavor neutral wood so it does not affect the taste of the bourbon at all. 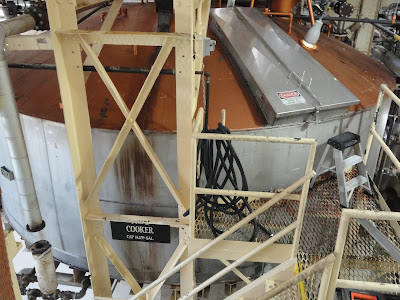 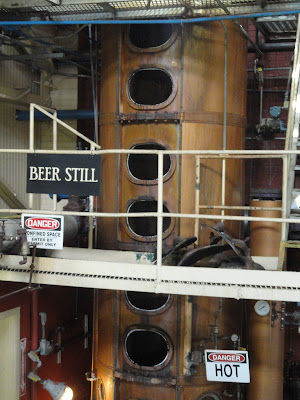 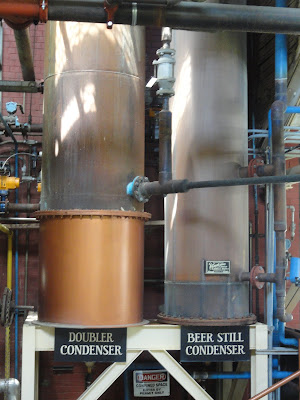 Four Roses produces three main brands in the U.S., including Yellow Label, Small Batch and Single Barrel. Check my previous post for some tasting notes on these bourbons. In addition, they produce some limited edition bourbons each year. 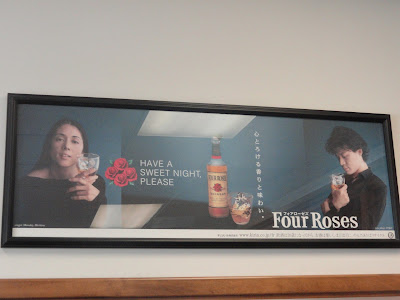 Besides the U.S. brands, Four Roses also produces two which are unique to the Japan market, the Black and Platinum. Japan has always been a huge market for Four Roses and these two bourbons were created specifically in that market during the 1990s. When Kirin purchased Four Roses, it was decided to continue to make these two bourbons only available in Japan. There is always the possibility that could change in the future, and I sincerely hope it does. 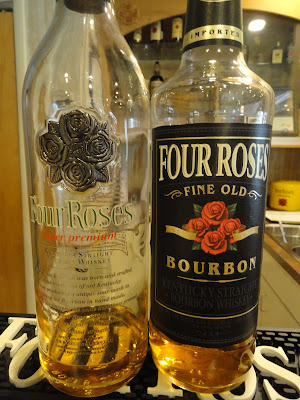 I was fortunate to get to taste the Black and Platinum (pictured above). Both bourbons use a combination of the two mashbills and the Black uses the K yeast while the Platinum uses the K and V yeasts. Both bourbons were silky smooth and absolutely compelling, with the Black presenting more of a spicy and complex profile while the Platinum was more floral, though still with plenty of spice notes. These were perfect sipping bourbons, delicious on their own without the need to be in a cocktail. They taste differently from the three U.S. brands, though you still can detect a thread of similarity. The Japanese are lucky to have these two excellent bourbons available. 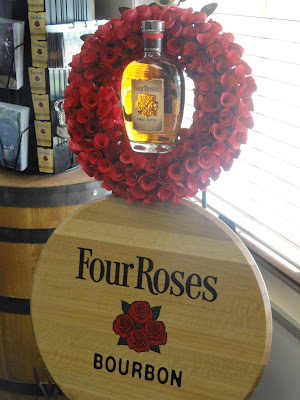 Four Roses produces plenty of exciting products so you should expand your bourbon horizons and try some of their bourbons. You won't be disappointed.
Posted by Richard Auffrey at 4:00 AM

Richard, can you suggest a Four Roses bottling that might appeal to a fan of elegantly deep Spey Malts?

Hi Dewey:
I think I would suggest trying their Small Batch Bourbon.

Sadly I haven't had Four Roses yet. Gonna fix that this week!

I was going to try this recently, but no one here carries it :(