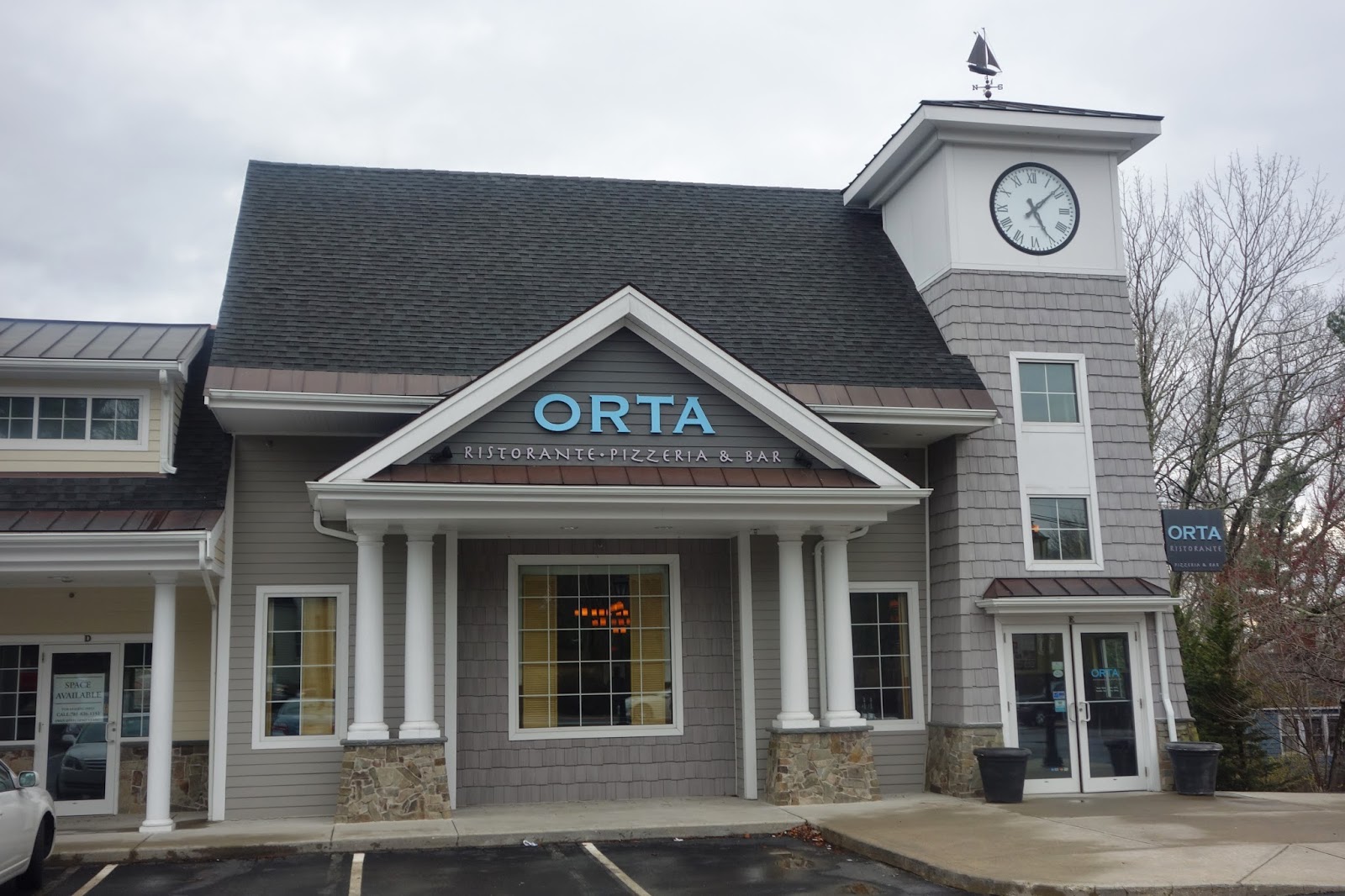 As one of my own Break Out Of The Box issues, I need to dine more in the communities south of Boston. Like the northern suburbs, the South Shore has acquired some fine restaurants, and they can be reached fairly easily. Recently, I journeyed down to Pembroke to attend a media dinner at Orta Ristorante, an Italian spot which is flying under the radar of many food lovers.

Orta is located less than thirty miles from Boston, and is easily reached by taking Route 3 South to Route 53 South. In 2010, the restaurant was opened by Chef Jimmy Burke who, in 2012, sold it to Chef Brett Williams, one of his protégés. Brett comes from a culinary family, as his grandfather owned the famous Lombardo's in East Boston. He has also spent time traveling and working in various regions of Italy, including Tuscany, Piedmont, Veneto, and the Liguria. Lake Orta is a small, beautiful lake located in northern Italy, which Honoré de Balzac once referred to as a "grey pearl in a green jewel-box." While traveling, Brett fell in love with Cara and even proposed to her in a town near Lake Orta. Cara had a restaurant background and she now runs the front of the house at Orta. 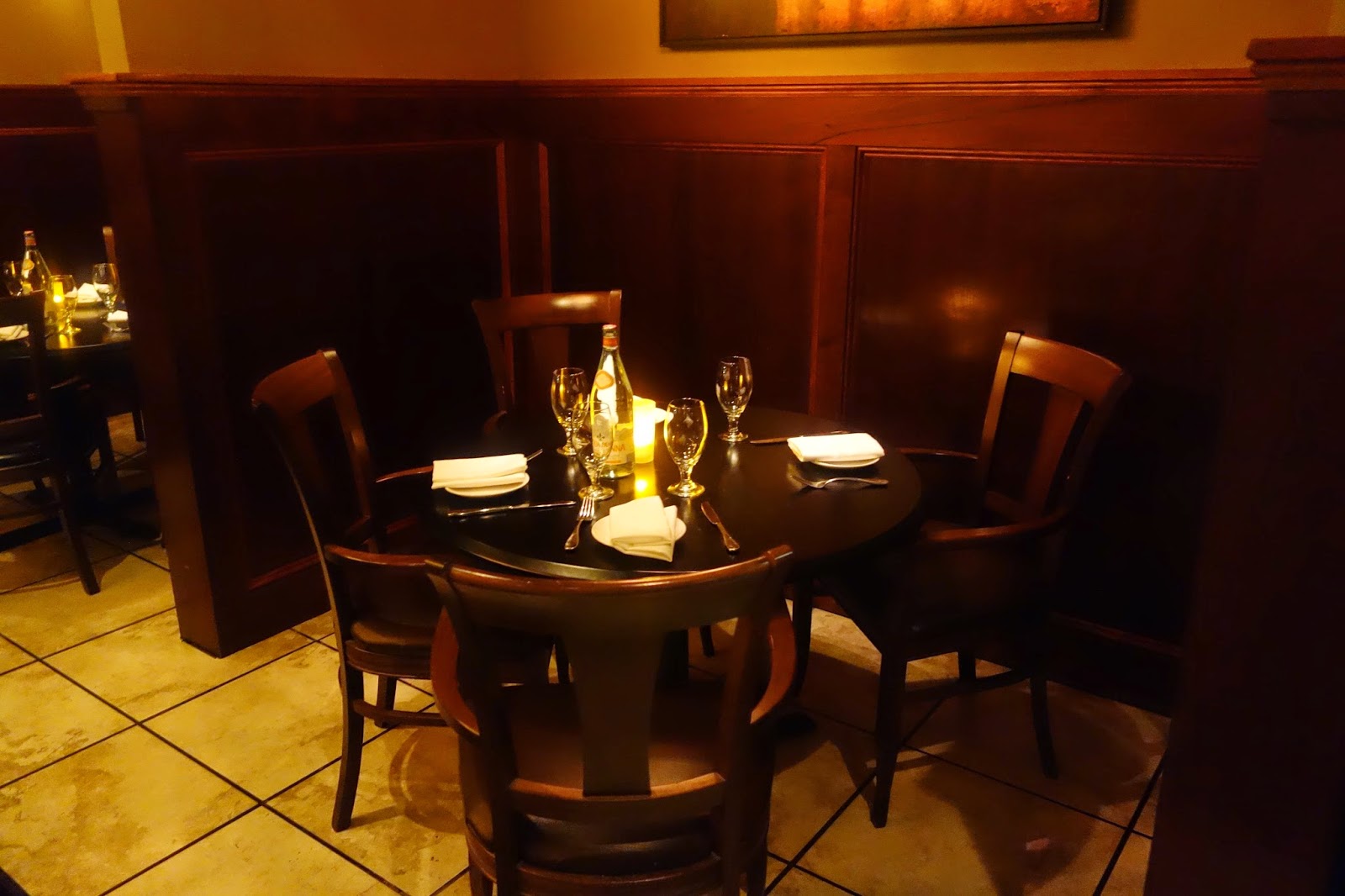 Orta is a medium-sized restaurant with a homey vibe. A number of the tables are inset within small alcoves, giving a bit more privacy to diners. There is also a small bar where you can sit. I was pleased with the alluring kitchen smells that wafted through the restaurant, due in part to the open kitchen and brick oven. It made me excited to try the cuisine. 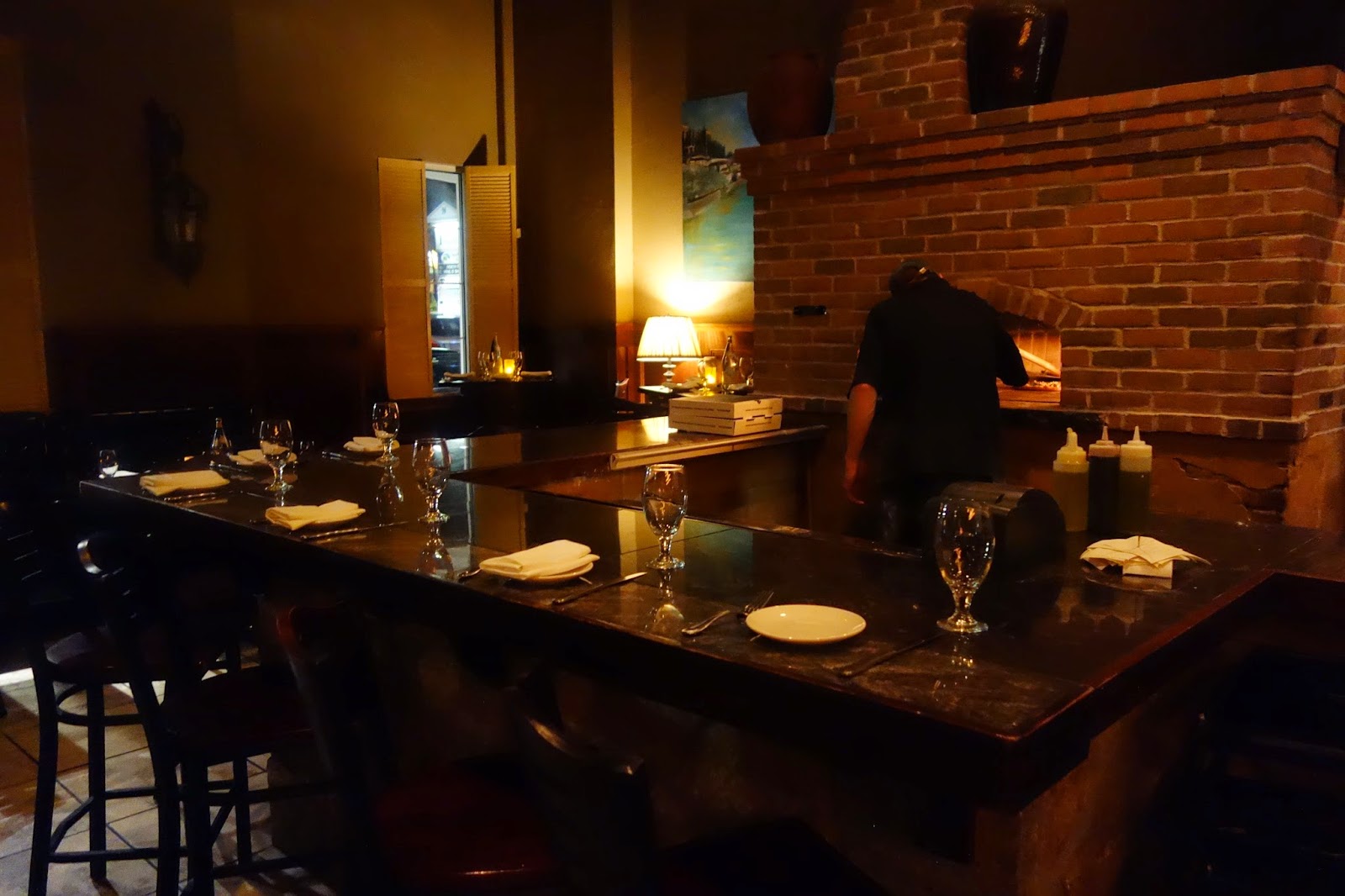 There is a brick oven where they make their pizza, and you can sit at the bar surrounding the oven. This is probably an especially excellent location during the colder months. 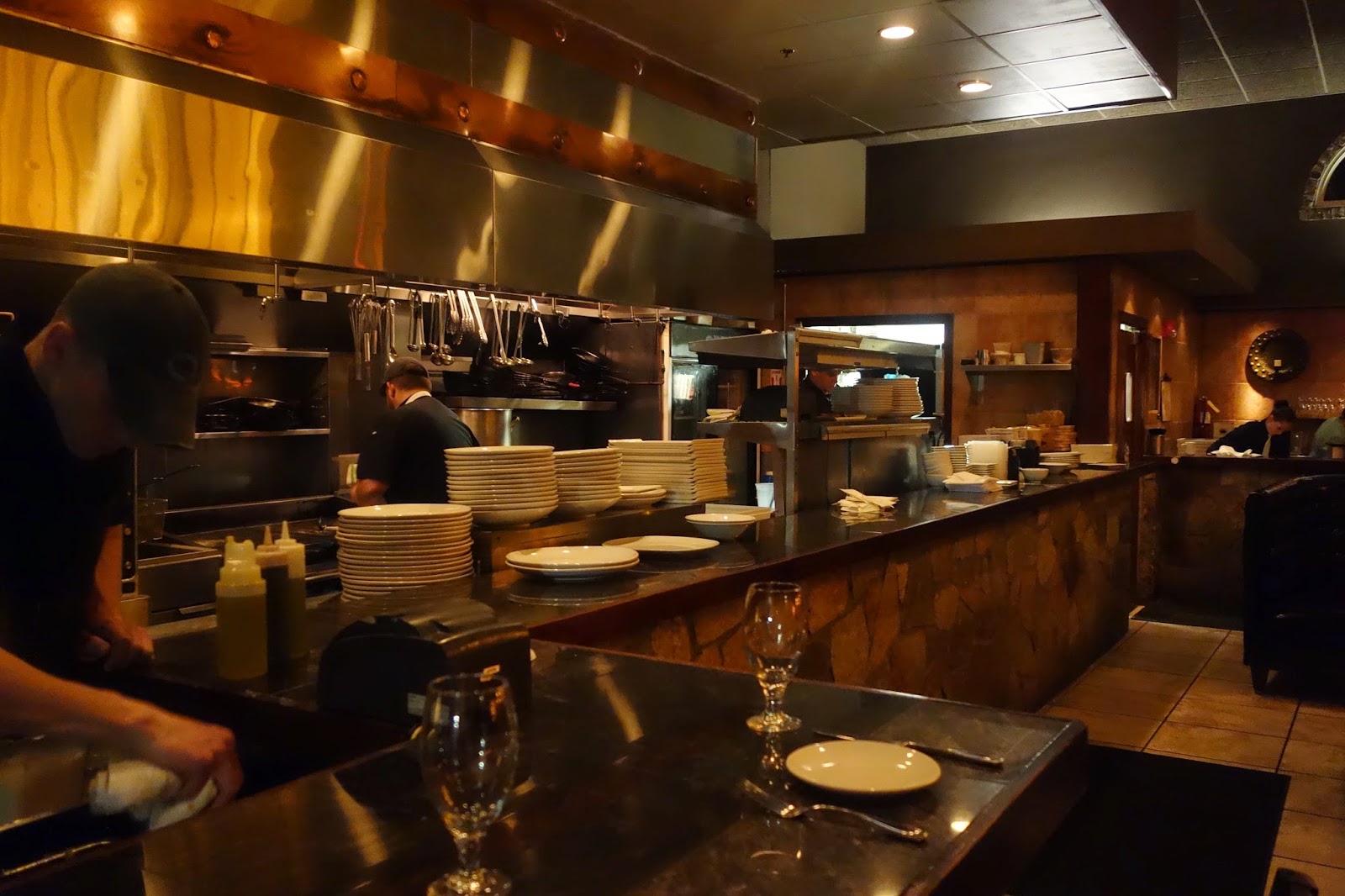 The prices are generally very reasonable, especially considering the ample portions that are usually served. There is plenty of variety, so no matter what your preferences, you should be able to find dishes you will enjoy. I actually had some difficulty selecting my entree as there were several dishes I wanted to try. The most compelling element is the quality of the food, which will satisfy any food lover. Some places provide plentiful mounds of food, trying to make up for a lower quality product, but that is definitely not the case at Orta. They provide both quantity and quality.

The restaurant has a full bar, and cocktails cost $11, including their own, homemade Sangria. They carry about 20 beers by the bottle, priced $4.25-$6.50, including both local brews and international ones. You'll find about 17 wines available by the glass, priced $8.50-$12, and 11 of those are Italian. Enjoy a glass of Falanghina or Vermentino. You'll also find about 60 wines available by the bottle, most priced under $50. However, those wines often are priced around three times the usual retail, though the markup on their higher end wines is much less. I like the diversity of the list, though wish the markup on their less expensive wines was lower. 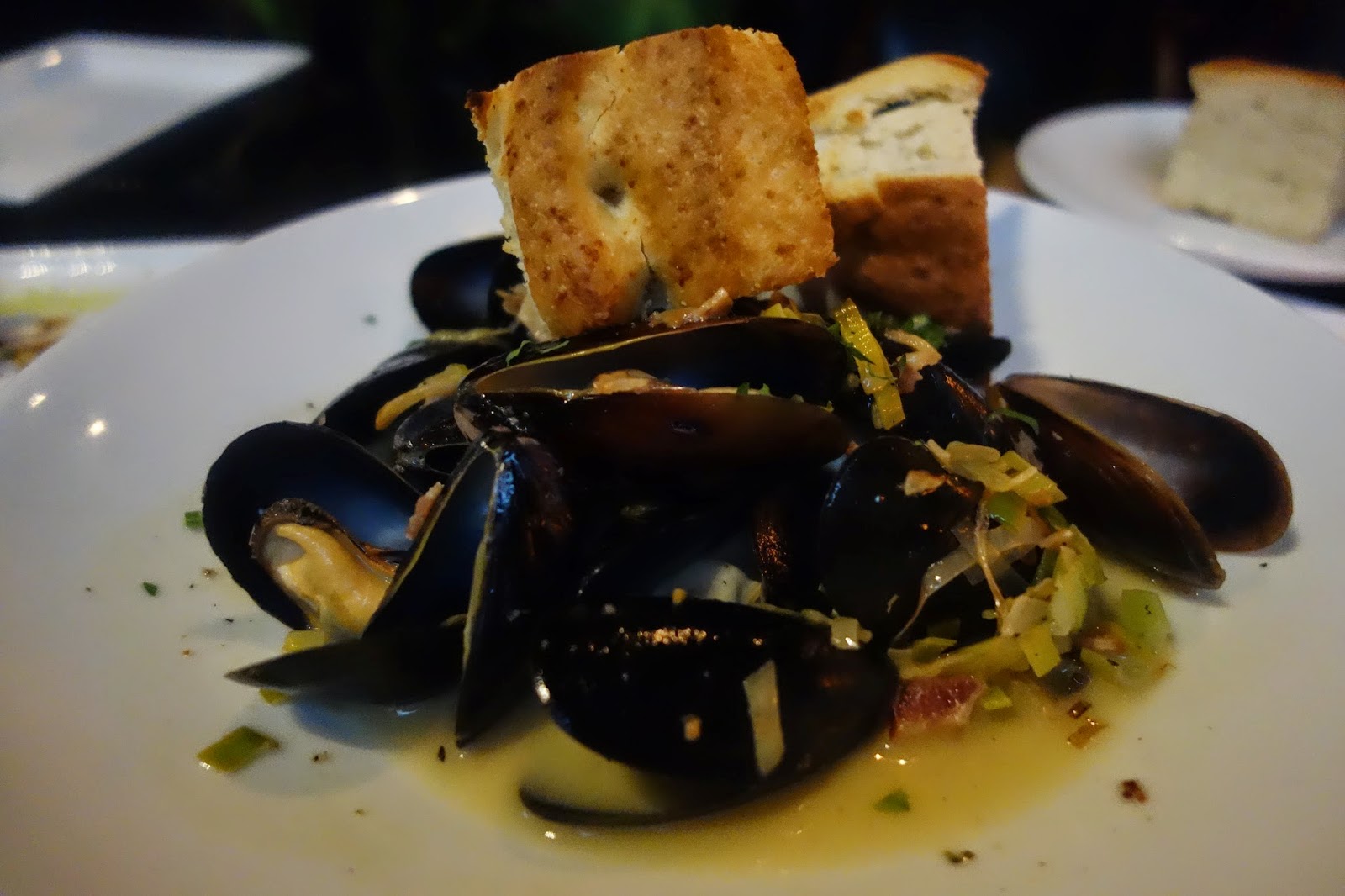 Before your food starts arriving, you will receive a basket of fresh Foccacia with a plate of olive oil and balsamic swirl. Our meal then began with several different appetizers.

The PEI Mussels ($10) are made with leeks, smoked bacon, & roasted garlic thyme butter, are are accompanied by grilled focaccia. The mussels were plump and tender, with a flavorful broth, perfect for dipping your bread. The Yellow Fin Tuna Tartare ($12) was also an impressive dish, made with a soy ginger reduction, sesame, & wasabi aioli and accompanied by chive crackers. There was plenty of silky pieces of tuna, and the flavors blended well together. Definitely one of the better examples of tuna tartare. 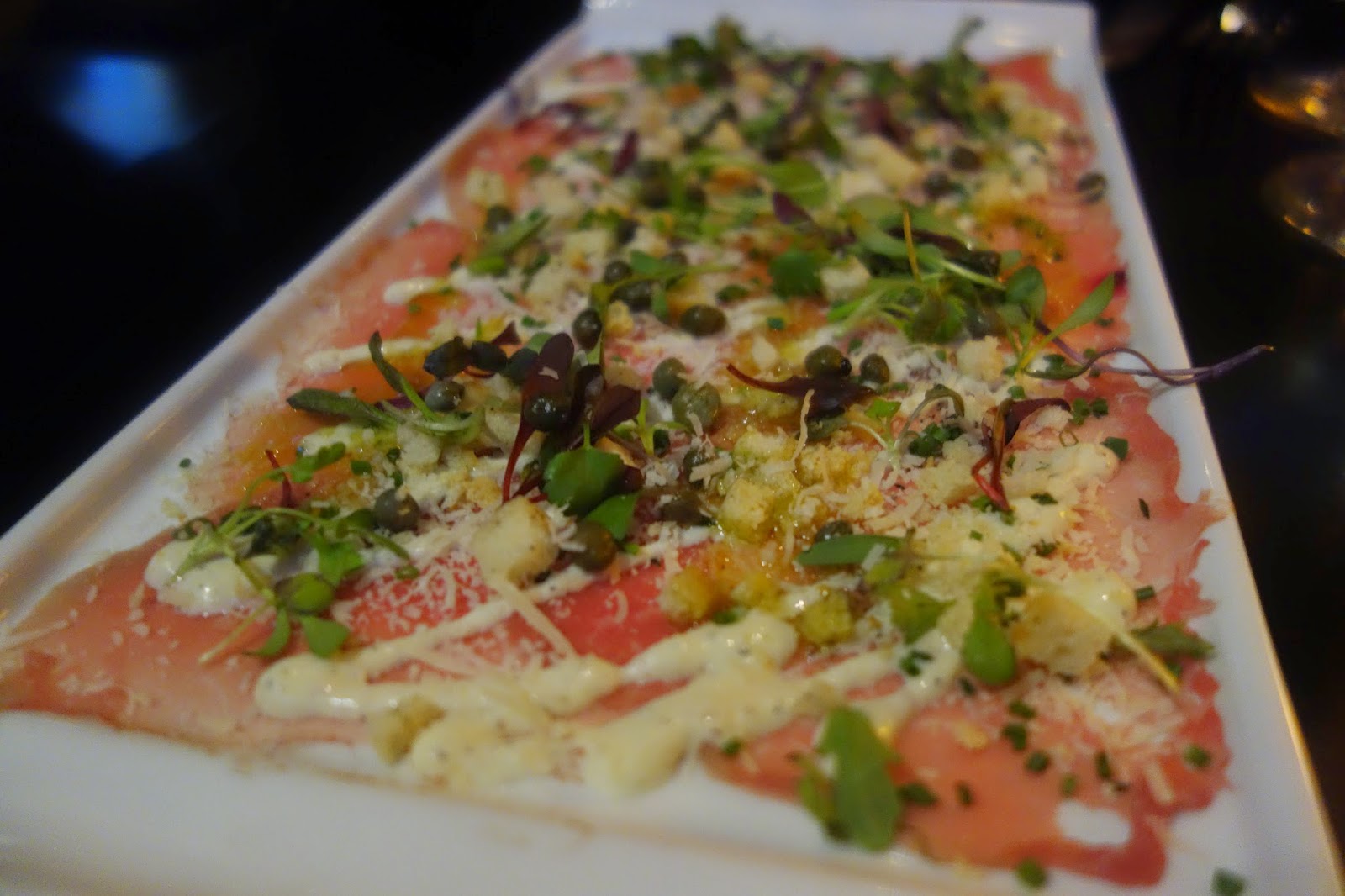 The Beef Carpaccio ($9) is an ample dish, with capers, lemon aioli, parmigiano reggiano, petit croutons, and baby greens, though I found there was too much lemon for my preferences. The paper thin beef was delicious, melting in your mouth and the croutons added a nice crunchy texture to the dish. 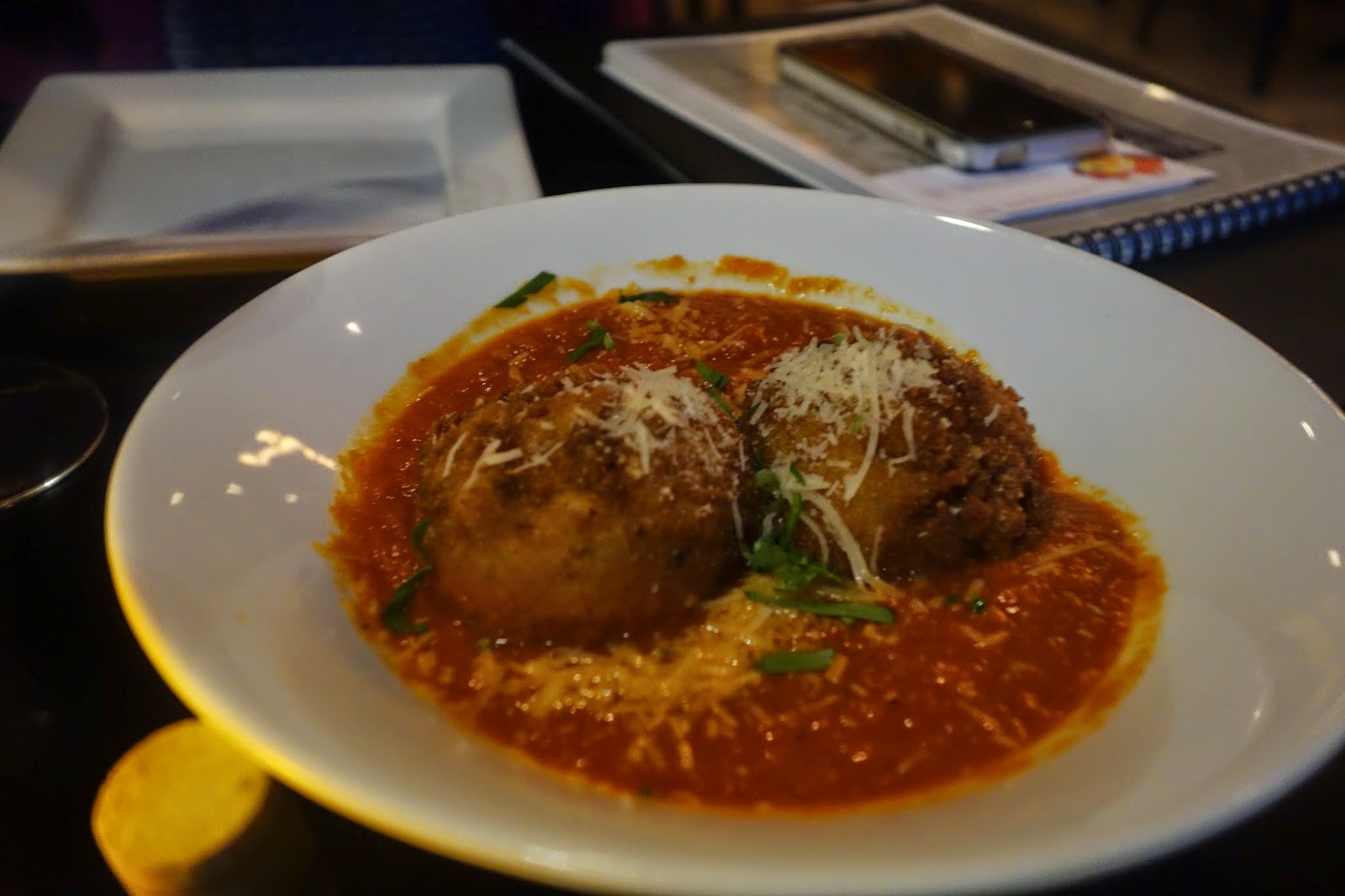 The Orta Arancini ($8) include two large arancini in a spicy tomato sauce. An excellent crunchy exterior led to a tasty cheesy interior, enhanced by the spiciness of the sauce. This is another dish where dipping your bread into the sauce is a very good idea. 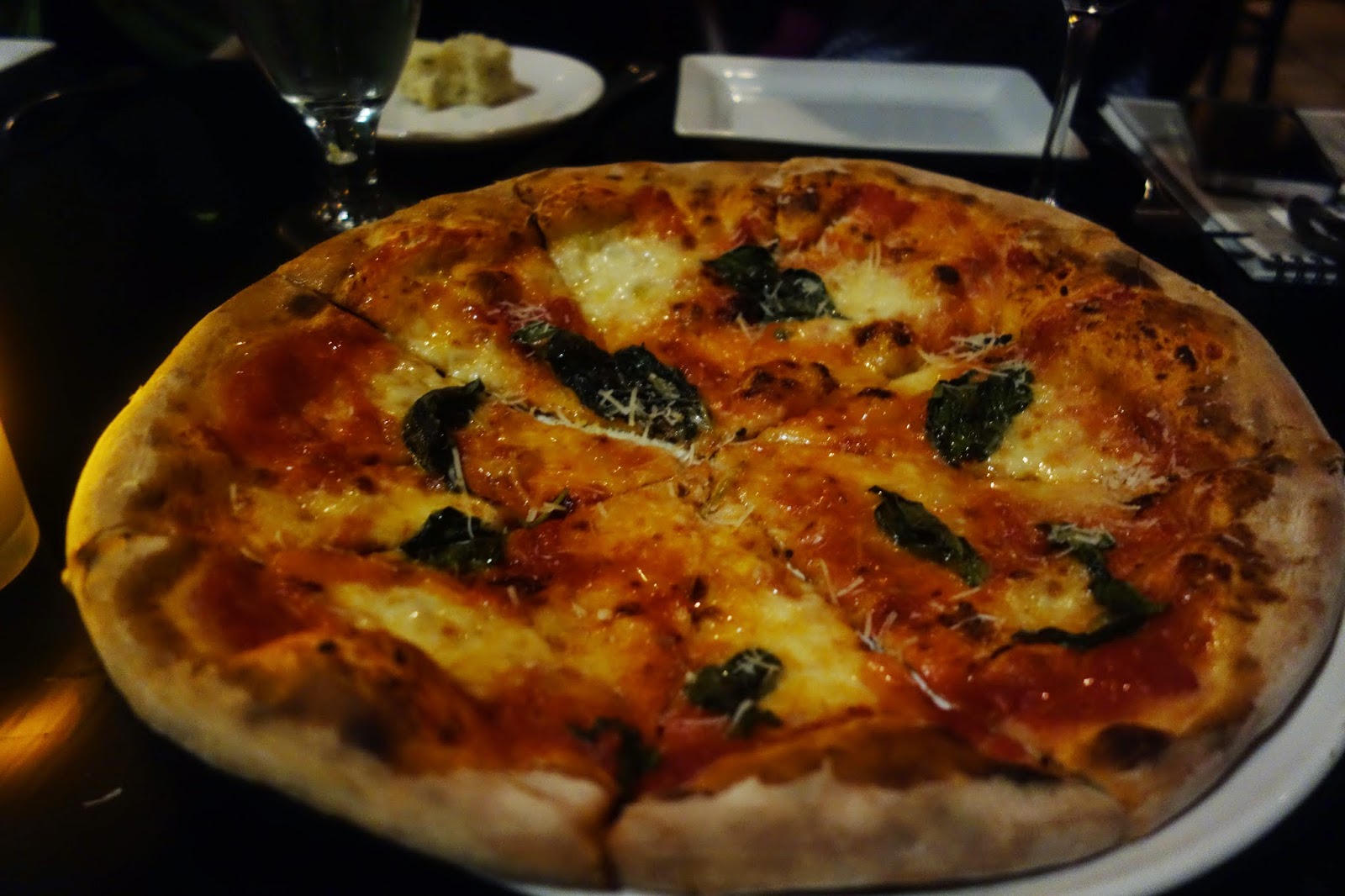 Next up, we received three brick oven pizzas for the table, including a Margherita ($14) made with San Marzano tomatoes, fresh mozzarella, and basil; Duck Confit ($15) made with aged cheddar, dried cranberries, baby arugula, & balsamic; and Sausage ($15) made with banana peppers, grilled onions, & fresh mozzarella. The pizza had a nice, thin crust with a bit of char, and I liked the flavor of the sauce. This is a very good brick oven pizza, and the different types were all interesting and delicious. I could easily make a meal of appetizers and pizza. 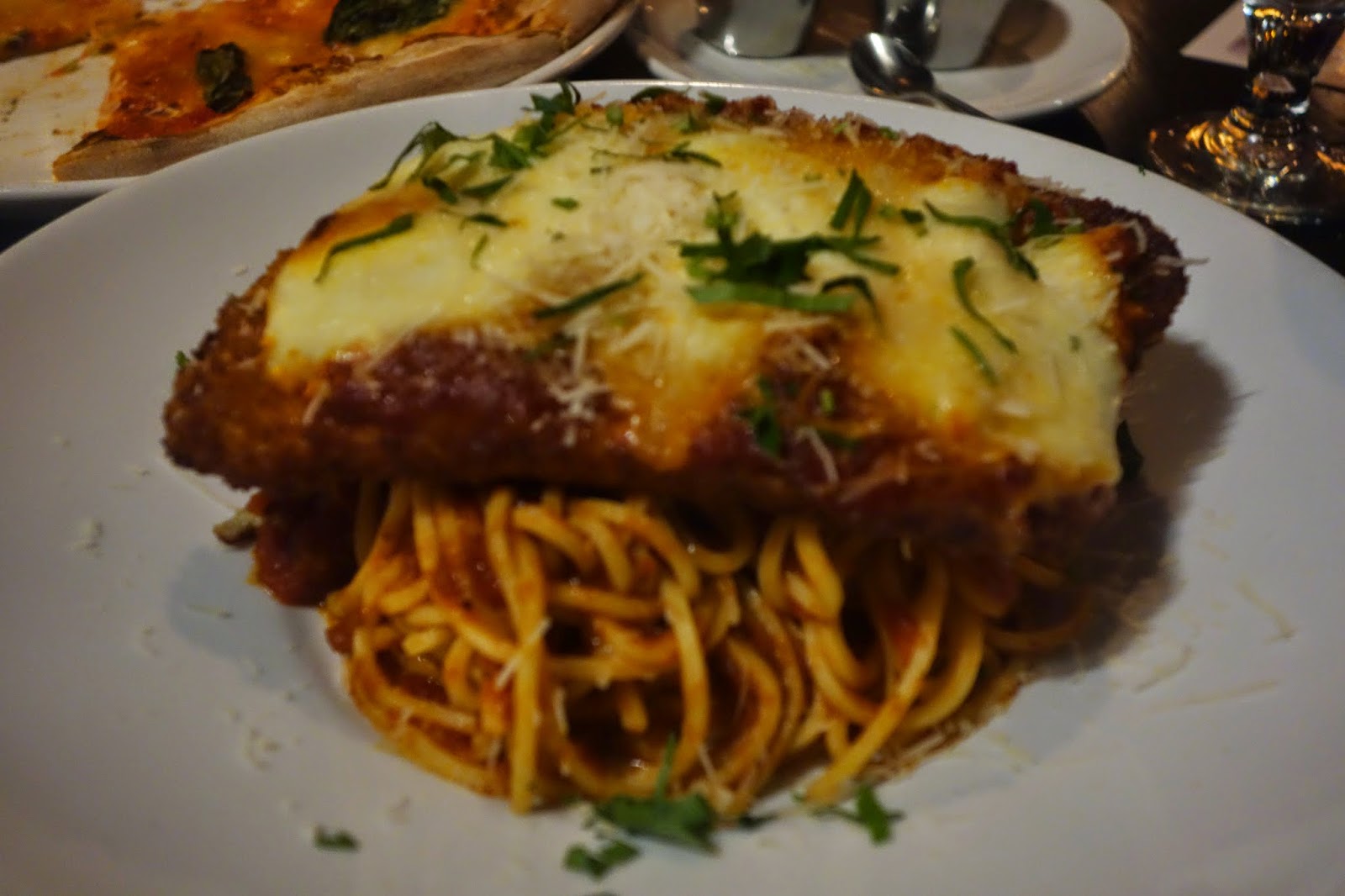 It seems that all of us ordered different entrees from the Pasta and Secondi selections, so it was a good opportunity to view many of the dishes, and they all were ample and visually appealing. I opted for the Panko Crusted Chicken ($20), which comes with spaghetti. It was a thicker piece of chicken, though cooked well so that it was tender and moist. Plenty of gooey cheese was melted atop the chicken, which was coated by a crunchy, panko coating. An excellent and flavorful chicken dish, one I would order again. The spaghetti though was ok, and rather forgetful. Everyone else at our table enjoyed their entrees very much too. 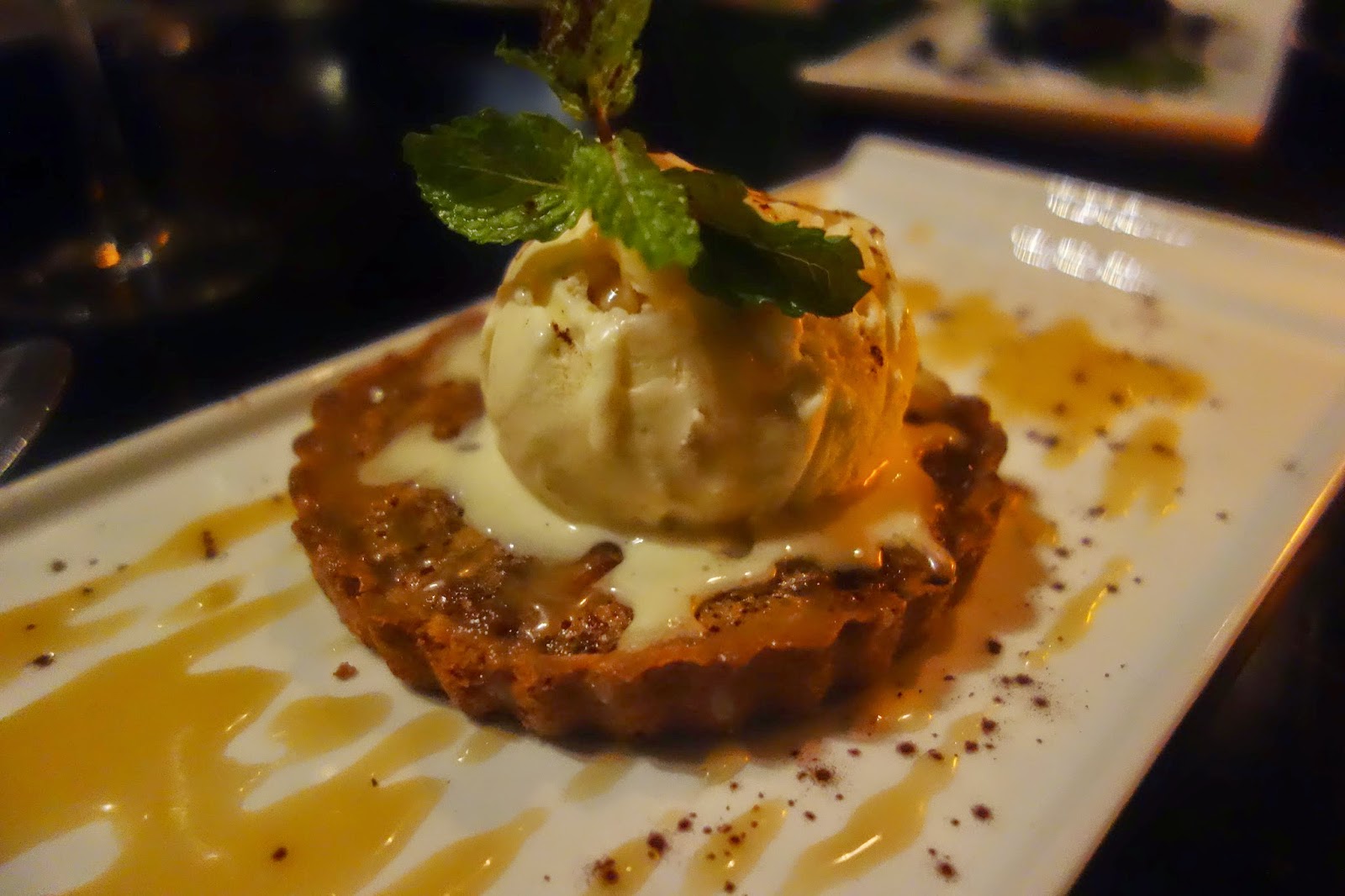 After dinner, we received a couple desserts, including Mini Black Bottom Cheesecakes, topped by assorted berries and chocolate drizzle, and which reminded me of brownies. My favorite of the desserts though was the Warm Pecan Pie, with a shortbread crust and topped by caramel & vanilla gelato. Even as full as I was from dinner, I still made a little room for some of this wonderful sweet delight. 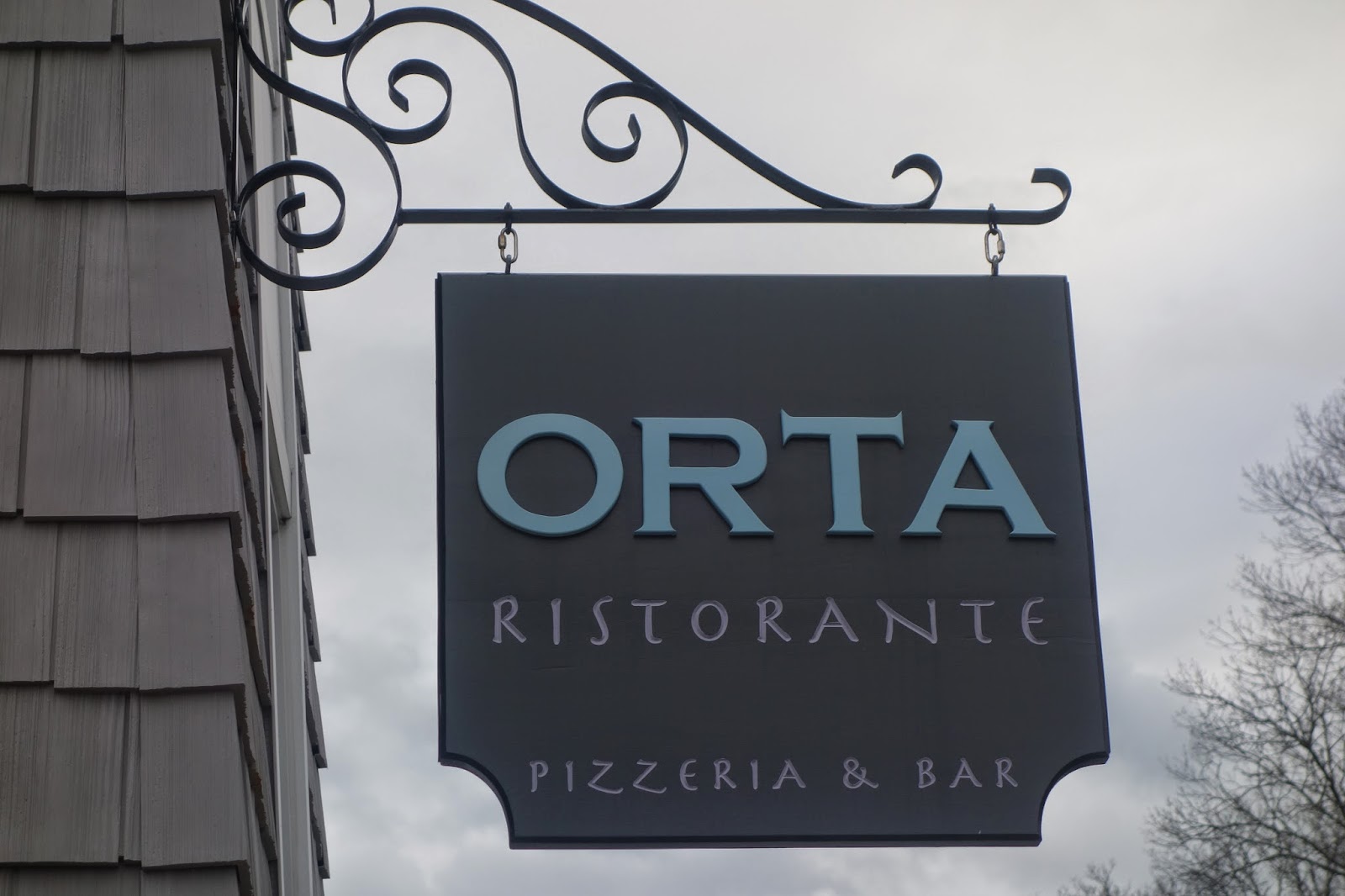 Overall, I had a very good experience at Orta and would return to dine there again. In general, the food is tasty, portions are ample, and it is reasonably priced. It would be a fine place for an intimate dinner for two, or a group of friends out for the evening.