Pirate Fishermen: No Peglegs Nor Parrots 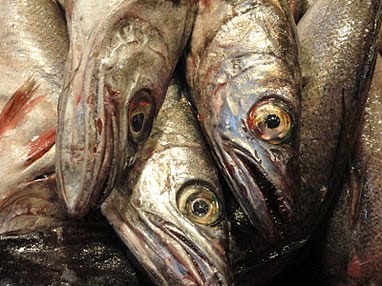 During the 17th and early 18th centuries, pirate ships threatened ships that traveled the waters of the Caribbean. Pirates still exist, and sometimes they still threaten ships, such as those pirates that operate off the coast of Somalia. However, there are other pirates who threaten another valuable target, the fish of the seven seas. I don't think the average person understands the vast scope of this piracy problem, and the harms that it causes.

I previously wrote about the problem of piracy and the Patagonian Toothfish, aka Chilean Sea Bass. Pirates were decimating the population of this species, caring only about the money they received for the fish. Fortunately, united efforts were successful in combating this dire threat and now it is a relatively minor issue. Toothfish is but a single example of the many species that face peril, illustrative of the general threat posed by these pirate fishermen. Officially, pirate fishing is referred to as Illegal, Unregulated & Unreported (IUU) fishing. How widespread is this problem? Is it a large enough problem that warrants our action?

In an upcoming issue of Marine Policy (September 2014), a thought provoking study will be published, Estimates of Illegal and Unreported Fish in Seafood Imports to the USA, authored by Ganapathiraju Pramod, Katrina Nakamura, Tony J. Pitcher and Leslie Delagran. Their stunning conclusion is that from 20% to 32% of wild-caught seafood imports to the US come from IUU fishing. That is astounding and should concern us all. This is also a problem faced all across the globe, and not just in the U.S.

These pirate fishermen ignore laws and restrictions on where they can fish, what they can fish, and how much they can fish. All they are concerned with is maximizing profits, ignoring whatever harms they cause in the process. They pose a danger to threatened species, which may be overfished and which laws have been instituted to protect. They pose a danger to the environment of the sea, to marine ecosystems, by using illegal gear which can harm the bottom of the sea, destroy reefs and much more. They hurt the livelihood of legal fishermen, who operate within the bounds of the law. This is the poaching of the seas and needs to be stopped.

Why does so much of this IUU seafood enter the U.S.? The difficulty in tracking this illegally acquired seafood is due to an often incredibly complex supply chain which allows multiple occasions when such illegal seafood can be snuck into that chain. This is especially true when seafood is processed post-harvest, in a different country from where the fish was first obtained. All of the various middlemen and post-harvest travels are ample opportunity for illegal obtained seafood to be "laundered," like illegal money.

Currently, the U.S. government doesn't do enough to stop this importation of IUU seafood. The Lacey Act, which has been in existence for over 100 years, provides a mechanism to punish those engaged in the trade of IUU seafood. However, you cannot reach the point of punishment until you first detect that such IUU seafood exists. And in that respect, the U.S.'s efforts are insufficient. A tiny portion of seafood imports, maybe only 2%, are inspected, but that is more for food safety and species identification rather than checking whether it is illegal or not. As such, plenty of IUU seafood is going to continue entering the U.S.

I should also note that a contributing factor to this entire problem is that the U.S. currently imports a disturbing 91% of their seafood. Consumers need to purchase and consume much more local seafood. That should help to decrease the amount of IUU seafood that enters the U.S. Though IUU fishing does occurs within the U.S., it is to a much smaller degree than it is internationally and the U.S. is better able to combat and monitor the problem. So, rather than roll the die on imported seafood, which could be IUU, choose local.

Pirates have been a scourge of the seas for many centuries, and we still need to unite to combat them.
Posted by Richard Auffrey at 3:00 AM