Pastrami on Rye: The Rise & Fall of the Jewish Deli 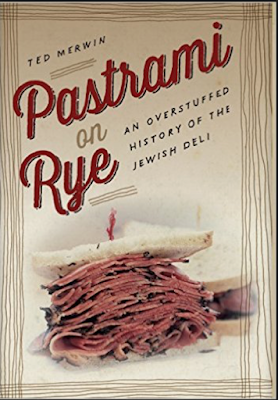 "The delicatessen , whether in its kosher or non kosher variant, was a second home for many Americans Jews,..."

We have seen the rise and fall of the American Jewish delicatessen, reflective of significant changes in the American Jewish culture over the last 150 years. Though you can still find kosher and nonkosher delis in the U.S., there are far less of them than once existed and they do not occupy the same central place for most Jews. What led to the deli's initial boom and what was its role in the Jewish community? Why did this all change? To understand the answers, we should read a fascinating book on the history of the Jewish deli, and more specifically the New York Jewish deli.

"A sandwich to a Jew is just as important as a country to a gentile.”

Pastrami on Rye: An Overstuffed History of the Jewish Deli by Ted Merwin (NYU Press, October 2015, $26.95) is a hardcover book of 256 pages (and is also available as an e-book). In five large chapters, Merwin explores the history of the New York Jewish deli, from its origins to the present day. During this exploration, Merwin also mentions Jewish delis in other U.S. regions though the majority of the book centers on New York. He discusses the rise and fall of the Jewish deli, seeing some hope that delis can once again rise, to help the cultural identity of Jews.

The author, Ted Merwin, is an Associate Professor of Religion and Judaic Studies at Dickinson College, where he is also the Founding Director of the Milton B. Asbell Center for Jewish Life. He writes about Jewish culture and has been published in a variety of publications, including the New York Times, New York Post, Huffington Post, Washington Post, and New York Jewish Week.

"...delicatessens are oriented around the consumption of red meat,..."

The term "delicatessen" has its roots in the Latin word delicatus which means “dainty, tender, charming, enticing, alluring, and voluptuous” and was often used to refer to "sexual attractiveness." The term was adopted by a number of other languages, becoming Delikatesse in German, and now referring to "unusual and highly prized food." German immigrants to the U.S. in the late 19th century ontroduced the word, which was adopted in its plural form, delicatessen. And as such, the first delicatessen owners in New York were from Germany and Alsace-Lorraine.

"...the pastrami sandwich, as we will see, became the ultimate symbol of carnal desire."

There is a discussion of how "Judaism has almost always revolved around meat," referring how meat consumption was once a religious activity of Hebrews, representing the expiation of sin. This religious activity led to the curing of meat by picking, the origin of corned beef. "Cured meats and sausages entered the Jewish diet during the tenth and eleventh centuries, when Jews were living in the Alsace-Lorraine region of France." And pastrami, which originated in Turkey, became a Romanian speciality which eventually spread to the Jews.

".., in Yiddish, the word for “overstuffed” is ongeshtupped; the meat is crammed between the bread in a crude, sensual way that recalls the act of copulation. The delicatessen, after all, is a space of carnality, of the pleasures of the “flesh”—the word for meat in Yiddish is fleysh."

Initially, when the first generation of Jews immigrated to New York, around the turn of the 20th century, there were over 1000 kosher butcheries but very few delicatessens. This generation preferred to cook at home and the Jewish mother would see it as an affront to her cooking skill to dine out. It would be their children, the second generation, who would start to cherish the restaurant experience, even creating a word for the experience, oyesessen. In time, kosher butcher shops started selling prepared foods, many turning into delicatessens.

“There could be no picture making,” the film director Orson Welles flatly declared, “without pastrami.

By the 1930s, there were over 2300 delicatessens, Jewish and non-Jewish, in New York. The famed Katz’s Delicatessen opened in 1888 and might be the first “true” Jewish delicatessen in New York. "The delicatessen enabled Jews to eat out in a Jewish way, by enjoying in public the foods that they associated with their heritage." It became a communal spot, a central gathering place for the Jewish community, to solidify their cultural identity. It was an important sense of place, the food being secondary to that aspect.

The book even makes mention of some specific historical delicatessens in Boston, though noting their relative lack of importance. "Other than Rubin’s, which opened in Brookline in 1928, kosher delicatessens were never very popular in Boston, perhaps because of the centrality of pork and shellfish in the cuisine of New England." This section also mentions what once was a speciality in Boston delicatessens, a sausage called cervelat which was a mixture of beef, bacon, and pork rind packed into cow intestines and then smoked and boiled.

"In the mid-1950s, the shortened form deli first came into widespread use."

As the 1960s arrived, delicatessens started being supplanted by another type of restaurant, the Chinese restaurant. Chinese food became a significant craze for the Jewish community and it started to become their main communal gathering spot, replacing the delicatessen. Kosher Chinese restaurants were established, helping to appeal to even observant Jews. You could even find Chinese inspired dishes at a few delicatessens, such as Salami Fried Rice or Chicken Bernstein, which was stuffed with bamboo shoots, water chestnuts and pastrami.

"There is much talk of “gastronomic” Jews or “bagel and lox Jews” (the term “pastrami Jew” has not yet been coined) who presumably connect to their Jewish identity chiefly through their stomachs."

Today, there are only about 15 kosher delis left in the five boroughs of New York City. Most Jews don't eat at a delicatessen on a regular basis and the deli no longer occupies a communal gathering spot. Some of the most famous delis in New York City have primarily become tourist spots. It has become more nostalgia for the Jewish community,  as well as fodder for "hipster" delis.

"As long as both Jews and non-Jews want to eat "traditional" Jewish food, delis will always exist on our culture."

Merlin has written an interesting history of the New York deli, concentrating more on the institution than some of the specifics, such as deli food. It might have been interesting to read more about specific Jewish dishes sold at these delis, from pastrami to knishes. It might also have been interesting to learn more about the operation of these delis, from the workers to the owners. As such, this history is a very good starting point and we can hope that Merwin may expand his coverage in a sequel. With those caveats, I still recommend that you check out this book and learn much more about the iconic Jewish delicatessen.

Note: All quotes in this post are from Pastrami on Rye: An Overstuffed History of the Jewish Deli by Ted Merwin
Posted by Richard Auffrey at 1:30 PM