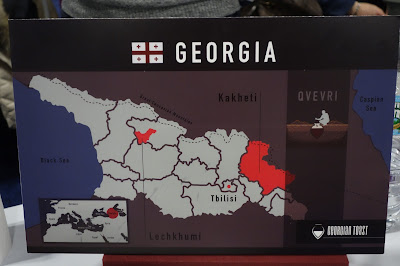 The wonderful tastes of Georgia, and I'm not referring to Pecans and Peaches.

I'm referring to the country of Georgia, situated in the Caucasus region of Eurasia, and which once was part of the Soviet Union. Some claim that Georgia is the birthplace of wine though the exact origin of wine making may never be known. However, it cannot be denied that Georgia's vinous history extends back thousands of years. Many American consumers have never tasted a Georgian wine though Boston area wine lovers have had opportunities to sample these wines at the last several Boston Wine Expos, including the most recent one.

This year, there seemed to be only a single table of Georgian wines, manned by Georgian Toast, a new importer/distributor of only Georgian wines, which offered six wines for tasting. As they are new, their portfolio is small but they have plans for growth, with the desire to introduce Americans to these intriguing wines with a sense of history. There are over 500 indigenous grapes in Georgia though only about 38 are currently used for wine production, such as Rkatsiteli, Mtsvane, Krakhuna, Saperavi, Gibrita, and Tavkveri.

It is also a long, historical tradition for Georgians to ferment and age their wines in clay vessels, called qvevri or kvevri. These are similar in some respects to amphorae though they usually lack handles. The qvevri are commonly buried underground in a marani, sometimes said to be a sacred area, though more commonly it refers to a wine cellar. These qvevri, for a multitude of reasons, can create some interesting wines, and the whites produced in these qvevri may sometimes be referred to as "orange wines," as the wine darkens in color and there are added intriguing flavors. Because of its importance, the qvevri was even added to the UNESCO Intangible Cultural Heritage List.

Wine is an integral component of Georgian culture, from the revelry of rtveli, their grape harvest, to the supra, a traditional feast. The term supra means "tablecloth" and the supra feast typically contains a lengthy amount of toasts. A tamada, a toastmaster, is selected to lead the evening, and the tamada will make all of the toasts. These toasts will honor family and friends, events in the past, present and future, and much more. It is customary to toast to every person attending the feast, saying something positive about them. The primary prohibition is that you cannot toast to anything that is negative.

I've enjoyed a number of other Georgian wines (you can find those reviews on my blog) and the six wines from Georgian Toast are worthy of your attention. I look forward to what else Georgian Toast adds to their portfolio in the future. 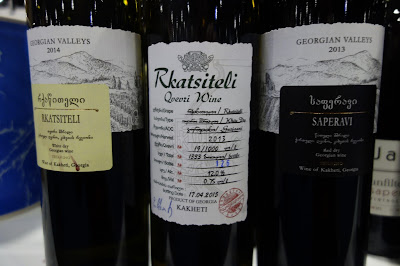 The 2014 Georgian Valleys Rkatsiteli is made from an ancient white grape, whose name means "red stem," and which is known for its high acidity.  Some Rkatiseli is grown in the U.S., including in Massachusetts and New York. I found this wine to be crisp and dry, with an intriguing blend of spice and herbals notes, with a mild apple flavor. It might remind you a little of Gewürztraminer though it has its own exotic identity. Delicious and different, you should check out this varietal.

I also tasted another Rkatsiteli, the 2013 KTW Qvevri Rkatsiteli. The Kakhetian Traditional Winemaking (KTW) was founded in 2001 but its roots extend back to around 1880, when winemaker Antimoz Chkhaidze acquired a vineyard in Askana in Western Georgia. Using traditional techniques, his wines became well known, even outside Georgia. It would be his great-grandson who would eventually created KTW, to pay homage to the traditional wine making methods of the Kakhetian region. This Rkatsiteli was fermented and aged in a traditional qvervi and possesses a darker, almost orange color. It possesses more notes of dried herbs, spice and an interesting nutty element though it is more restrained than other qvevri wines I've tasted. As such, it would make a nice introduction to qvevri wines for someone unfamiliar with them.

The 2013 Georgian Valleys Saperavi is also made from an ancient grape, a red one those name means literally "paint" or "dye," due to its intense dark-red color.  Saperavi can also be found outside of Georgia in places such as New York and Australia. About 15% of this wine sees some oak aging, and it presents as a fruity and easy drinking wine, with hints of spice. The juicy black fruit flavors are accented with some vanilla. This would be a good choice with burgers and ribs, hearty dishes whether in the winter or summer. 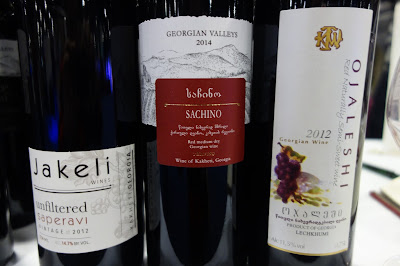 Malkhaz and Zaza Jakeli, who are brothers, started this vineyard in 2001 and from the start they chose to practice organic agriculture, and it is now certified organic. They prefer to make more natural wine, including Biodynamic ones, and the 2012 Jakeli Saperavi is not an exception. This wine is made with indigenous yeasts, is unfiltered, and spends about 30 months in stainless steel. It is the most expensive wine of the six, costing about $40.

The wine is a deep, dark red, nearly opaque and it had a more restrained nose of spicy black fruit. On the palate, it is a muscular wine, with intense black fruit flavors, rich spices and hints of earthiness and smoke. There is a touch of the exotic to it, something that is hard to put into words or nail down, but it enhances the complexity and allure of this wine. I was told that the wine changes in the glass over time, and I would love to experience this wine over the course of a couple days. Highly recommended.

The 2014 Georgian Valleys Sachino is an interesting blend of 70% Saperavi and 30% Rkatsiteli.  Again, it was smooth and easy drinking, with tasty black fruit flavors, but this time it was enhanced with some herbal and peppery notes. The addition of the Rkatsiteli seemed to elevate the complexity of this wine, and its flavor profile blended well with the Saperavi.

The 2012 KTM Ojaleshi is once again a wine made from an ancient grape, whose name means "growing on trees," and one that might have been around since the ancient Greeks. The grape commonly makes a sweet wine though it is capable of making dry wines too. The grapes for this particular wine came from the Orbeli Village in Western Georgia. I found this wine to be only mildly sweet, with juicy and almost jammy red fruit flavors. It is rather simple in its character but easy drinking and will appeal to wine lovers who prefer some sweetness in their wines.

Have you enjoyed Georgian wines before?