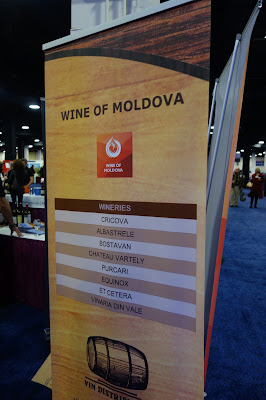 I've finally come to my last post of wine reviews from the Boston Wine Expo, the wines of Moldova.  Once a part of the Soviet Union, Moldova, located between Ukraine and Romania, declared independence in 1991. It has a lengthy history of wine making and currently there are almost 150,000 hectares of vineyards, growing over 30 different grapes, about 10% being indigenous varieties.

A traditional Moldovan home has a cellar where food and wine is stored, including the wine the homeowner made on their own. The importance of such wine cellars may be part of the reason why Moldova, according to the Guinness Book of World Records, has the world's largest wine collection, over 1.5 million bottles, which is called the Golden Collection. This wine cellar, located in the town of Milestii Mici, has over 34 miles of gothic style shelves, with about 70% red wines.

Of the six wines I am highlighting here, all of them cost from $10-$15, making them good values. Based on what I sampled, I very much would like to taste more Moldovan wines, especially those made from their indigenous grapes. 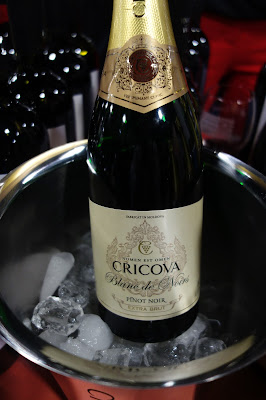 The Cricova Winery, founded in  1952, has the second largest wine cellar in Moldova and has been involved in producing Sparkling wine since the beginning. The NV Cricova Blanc de Noirs Extra Brut is produced in the methode champenoise from 100% Pinot Noir. It was crisp and dry, with subtle berry flavors, some herbal notes and a mild toasty element. Very pleasant and refreshing, it would make a nice aperitif or a pairing for food, from cheese to seafood.

The 2014 Albastrele Blanc de Cabernet is a white wine made from Cabernet Sauvignon, with a gentle pressing of the grapes and a quick removal of the skins. It reminded me more of a Sauvignon Blanc, with grassy, herbal and grapefruit notes, but with a more creamy aspect and some subtle red berry flavors. An interesting wine which would be sure to confuse anyone who tasted this blind.

Chateau Vartely is a newer company, but which produces a variety of wines from international grapes and some indigenous varieties. The 2013 Chateau Vartely Traminer is an intriguing white wine, with flavors of lychee and pineapple, with notes pepper, spicy herbs and black tea. Good acidity and a pleasing finish. The 2014 Chateau Vartely Villa D'Or Feteasca Regala is made from an indigenous white grape, Feteasca Regala (which means "royal maiden"). Allegedly, this grape was dedicated at a birthday celebration for Queen Elena of Romania and thus acquired its "royal" status. The wine has an appealing aroma of citrus flavors and on the palate, there were bright citrus flavors, with grapefruit, lemon and peach, with plenty of tartness and mild herbal notes, especially on the finish.

As for red wines, the 2011 Cricova Prestige Cabernet Sauvignon, aged in barrels from the Carpathian Mountains. (Yes, those same mountains which were the location of Dracula's castle in Bram Stoker's famous novel.) It was a strong Cabernet, with lots of black fruit flavors enhanced by dark spice notes. Tannins were moderate and there was a slight exotic hint to it, so that you might realize it is Cabernet from a region outside the usual.

Founded in 1827, Chateau Purcari has about 250 hectares of vineyards and the 2014 Chateau Purcari 1827 Rara Neagra is made from 100% indigenous Rara Neagra, a grape which brought much fame to Chateau Purcari before Cabernet came around. The grape is only grown on about 200 acres around the world. The wine had good acidity, black fruit flavors with a mild note of spice and herbs. The tannins were well integrated and the finish was moderately long.

Overall, these are wines you should taste, especially considering their low price point.

Posted by Richard Auffrey at 8:52 AM

Thanks - I'm excited to try them. Do you know of any store in Boston that carries Moldovan wine?

We are the distributors of the wines from Moldova reviewed in the blog article, and I am gladly providing you with a list of wine shops in the Boston area. Each one of them will have a different selection, but all of them are worth the try. If you can't open the google maps link, let me know and I'll send it differently.

Thank you dearly for your interest in our wines Geoff. Richard, thank you for a great article. Please feel free to send us an email at vindistributor@gmail.com, or check out our facebook page:

Mr. Birsan:
Thanks very much for the info!