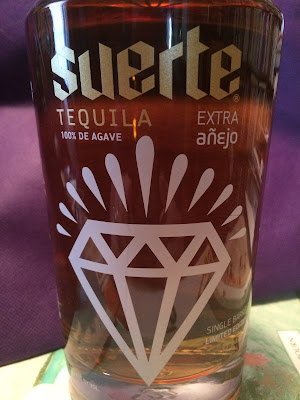 When a spirit comes in a bottle with a glow-in-the-dark label, it is often dismissed as a marketing ploy, a way to boost the appeal of an inexpensive and possibly even low quality spirit. It is often seen as flash covering up for flaws in the substance. This is definitely not the case with the Suerte Extra Añejo Tequila, which has a glow-in-the-dark label but contain an exquisite high-end tequila.

Back in 2012, two Colorado-based entrepreneurs Laurence Spiewak and Lance Sokol co-founded Suerte Tequila (suerte meaning luck in Spanish). Their tequila is produced in a 15,000 square-foot distillery in the highlands of Atotoniclo, Jalisco. Spiewak and Lance hired Master Distiller Pedro Hernandez Barba of Tequila Symbol to create their tequila and he uses many traditional methods. For example, the pina is slow cooked in an horno, oven, for about 56 hours. A giant stone wheel is then used to crush the baked pinas, to extract the juice, which is an ancient method known as the tahona process. Currently, Suerte makes a tequila line including Blanco, Reposado, Añejo and Extra Añejo.

Their Extra Añejo ($110-$125) is a limited edition, single barrel tequila made from 100% Blue Weber Agave. It is double distilled, aged in charred American White Oak whiskey barrels for 5 years and has an alcohol content of 40%. By law, an Extra Añejo tequila must be aged for at least three years so this tequila matures for even longer than the minimum. Each bottle is labeled with a unique batch number and each barrel is used only once. The bottle was designed by Seattle-based tattoo artist Adam Jackson. I received a media sample, which was labeled as Batch XA5914 and it also indicated it was 1/13, though I haven't been able to determine what that refers to. 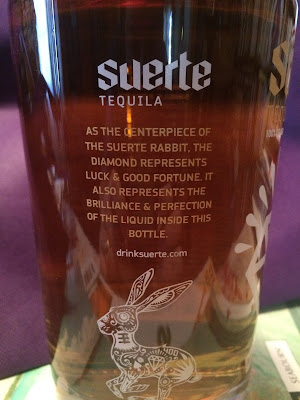 The tequila is a deep golden color with an enticing nose of roasted agave, vanilla, and citrus notes, On the palate, it presents a complex melange of flavors, including caramel, vanilla, orange, baking spices and roasted agave. It is smooth and delicious, with a mild bitterness on the finish, helping to balance the mild sweetness of the tequila. This is a tequila to slowly sip, savoring each intriguing taste, and it drinks so well you could sip it all night. Though you can enjoy this tequila on its own, it likely would pair well with certain foods too. Maybe a cheese plate or a a more gamey dish like roast lamb.

What is your favorite high-end tequila?

Posted by Richard Auffrey at 9:46 AM