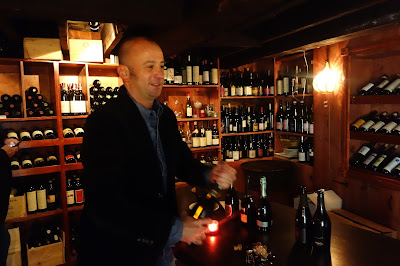 I first wrote those words back in 2013 and they are as relevant today as they were three years ago. Franciacorta still needs wider recognition among the wine-loving community. It continues to be difficult to find in local wine stores and on restaurant wine lists. How can we change this situation?

On Wednesday evening, Jeremy Parzen, the U.S. Franciacorta Trade Ambassador, came to Boston to help elevate recognition of this quality sparkling wine. At the Wine Bottega in the North End, Jeremy, accompanied by Francesca Zocchi, who represented the Consorzia Franciacorta, presented a tasting of 11 Franciacorta wines. A number of my friends and I attended the event, and also dined later that evening with Jeremy and Francesca at Sportello. It was a fun, informative and delicious tasting event and it certainly helped to illuminate some of the wonders of Franciacorta.

Jeremy, who writes the fascinating Do Bianchi blog, has this in his About page: "In 2007, food and wine historian, Italian translator, and rock musician Jeremy Parzen Ph.D. created his blog “Do Bianchi” to offer readers a humanist perspective into the world of Italian wine and food." He first started working with Italian wine back in 1998 and has since been published in numerous magazines, seen as an expert on Italian wine. After spending some time with him, it was more than evident he is a very intelligent person who is extremely knowledgeable about wine. In addition, he is personable, down-to-earth, and humble. He also loves to engage others in discussing wine and other topics.

In 2014, the Consorzio Franciacorta retained Jeremy to create a blog devoted to Franciacorta, and the result is Franciacorta: the Real Story. This is an excellent place to find background about the region, its producers, and wines as well as the latest news of Franciacorta, including upcoming events. You will also find a link to a new movie about Franciacorta, titled F For Franciacorta.

For my own previous articles on Franciacorta, showing my passion for this delicious sparkling wine, I recommend you check out: Fun With Franciacorta, Franciacorta: Bubbly That Needs To Be On Your Wine Radar and Franciacorta: Serious Bubbly You Should Be Drinking. 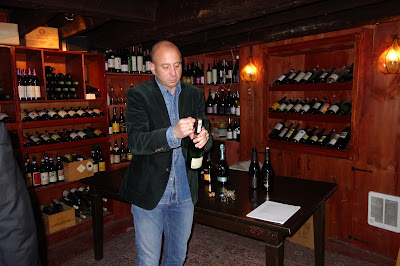 Jeremy began his discussion of Franciacorta with a short explanation of how sparkling wine is produced, which he feels is an important foundation in understanding the unique benefits of Franciacorta. One of the most important aspects of the Franciacorta region, which causes it to stand apart from many other regions which produce sparkling wine, is the climate. Franciacorta has an alpine climate rather than a continental one, which means their vineyards produce riper grapes so there is much less need to add sugar to the bubbly.

Thus, when you drink Franciacorta, the sweetness you perceive is often due much more to the fruit rather than added sugars. That is a significant difference which often doesn't receive sufficient attention. There seem to be few discussions on sugar levels in sparkling wine, despite the importance of that topic. It should also be mentioned that the alpine climate is affected in part by the moderating influence of Lake Iseo. Thus, the terroir of Franciacorta plays a strong role in the ultimate product, in the taste of its sparkling wine.

Another important consideration in the Franciacorta region is the diversity of its soils, over 60 different types. Its morainic soils, caused by ancient glacial action, are stony, with larger stones located in the northern part and much smaller stones to the south. These stony soils don't retain water well, which force grape vines to become stressed as they have to seek deeper to find water. That struggle leads to better grapes, and it is often said that the worst soils make the best wines. About 50% of Franciacorta vineyards are organic and the rest are moving in that direction too. It is possible that in the near future Franciacorta could become the first Italian wine region to become 100% organic.

Jeremy feels that Franciacorta is one of the world's greatest expressions of Chardonnay and the Franciacorta style Saten, the equivalent of Blanc de Blancs, is the perfect example of such. In Franciacorta, outside of their Rosé, Chardonnay is generally the major component of their sparkling wines, with sometimes a small percentage of added Pinot Noir or Pinot Blanc. You can find good Franciacorta for around $30-$40, though you can also find high end bottlings costing $200 or more.

I've mentioned before that I feel Franciacorta is very food friendly and was pleased to hear Jeremy echo those thoughts. Jeremy feels that Franciacorta, unlike some other sparkling wines, works very well throughout an entire meal, especially due to its freshness and fruit flavors. He feels that is an important advantage which can help convince consumers to purchase Franciacorta at a wine store or restaurant.

In the Franciacorta region, lake fish are a major pairing, including perch, a lake white fish, and freshwater sardines. These fish might be smoked or pickled (which is one of Jeremy's favorite preparations). What may surprise you is that Franciacorta has also become a major producer of caviar. I've previously paired caviar with Franciacorta and it is a superb match. Jeremy even loves a glass or two of Franciacorta with a juicy hamburger. I haven't tried that pairing yet but now it is on my short list to sample in the near future. 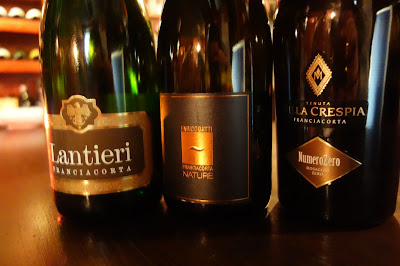 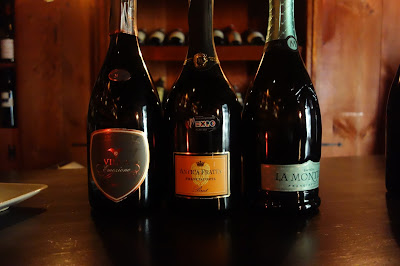 Of the 11 Franciacorta wines we tasted, four especially stood out to me. The Enrico Gatti Nature, a blend of 85% Chardonnay and 15% Pinot Noir, is made without any dosage. It is dry and fresh, with pleasing flavors of green apple and citrus, a hint of nuttiness and a subtle toasty element. The Lantieri Extra Brut, made from a blend of 90% Chardonnay and 10% Pinot Noir, was dry and creamy with mild apple notes, some minerality and a pleasing freshness.

I was also impressed by the two vintage Franciacorta we sampled. The 2009 Fratelli Berlucchi Brut Freccianera, a blend of 60% Chardonnay, 30% Pinot Blanc, and 10% Pinot Noir, spent about 55 months on the lees. It was an amazing sparkling wine, complex with multiple layers of flavor. Dry and intriguing, with delicious notes of green apple, citrus and toast, with a strong savory element. And its lengthy finish was so satisfying. Highly recommended. The 2006 Majolini Brut Electro, a blend of 80% Chardonnay and 20% Pinot Noir, spends at least 60 months on the lees. This was also extremely impressive, with a greater intensity and an earthy element. There was still pleasant fruit flavors, though more subtle, and also with a lingering and compelling finish. Highly recommended.

Let me leave you with an intriguing thought:
Champagne is considered a sparkling wine while Franciacorta is a wine that happens to be sparkling.
--Owner of Ca' del Bosco Winery

Rich, I can't thank you enough for the kind words. They really mean a lot to me. It was so great to connect like that and let's figure out a way to make that Nebbiolo evening happen this year with Adam Japko. Thanks again!