The Manhattan Cocktail: Creating Your Own (Part 2) 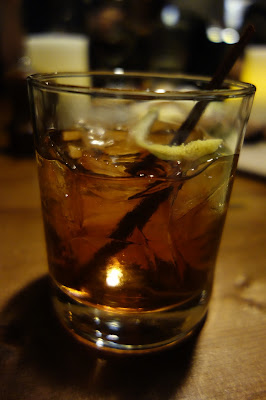 “My mentor, Tony Abou-Ganim, once told me the Manhattan should look and taste like Frank Sinatra in a glass.”
--The Manhattan Cocktail: A Modern Guide to the Whiskey Classic by Albert W.A. Schmidt

As I mentioned yesterday, though the Manhattan cocktail seems simple, made from only three basic ingredients, there is far more complexity in its creation than many realize. The objective is to balance the three ingredients to create the specific flavor profile that you desire. That would be relatively easy if each of the three ingredients possessed a uniform flavor but instead, each ingredient has such diversity that creating the balance you want gets more complicated. You need to understand the nature of the ingredients you use and then adapt your cocktail recipe accordingly.

Let's explore some of the complexities of the decision making involved in creating a Manhattan.

We’ll begin with the main ingredient, the Whiskey. First, there is the decision of which whiskey type to use, such as rye or bourbon. As a rough generalization, rye will tend to be more spicy and savory while a bourbon will tend to be sweeter. Thus, you can see that this initial decision will have a significant impact on the flavor profile of your cocktail. Do you want a more savory taste or a sweeter one?

However, there is also diversity in each whiskey category, especially when considering specific brands, which needs to be considered. For example, some bourbons have a higher proportion of rye, making them spicier than other bourbons with a higher proportion of corn. Other whiskies, which have spent a longer time in the barrel, may be spicier as well. In addition, some whiskies are lighter in body while others are heavier.

In essence, each specific brand and bottling of whiskey will create a different flavor profile in a Manhattan, though sometimes the differences might seem minor. With other comparisons, the differences can be quite significant. Selecting your whiskey for the Manhattan is a significant choice in the final resulting cocktail.

With the second ingredient, Vermouth, there is similar diversity in its taste profiles, especially now with the boom in artisan Vermouths. In general, you want to use a sweet vermouth, but sweetness levels will vary. In addition, the herbal and spice blends in each different Vermouth can vary tremendously, which creates a wide range of flavors that will affect your Manhattan. Some will be more bitter or floral than others. Some will use rare herbs and spices not found in many other Vermouths while there are also lighter and heavier Vermouths.

I should mention that not enough people pay attention to the Vermouth used in their Manhattans. They purchase inexpensive Vermouth, without much consideration to its flavor profile. You should pay as much concern for your Vermouth as you do your whiskey. Start exploring the myriad Vermouths on the market, checking out the different flavor profiles they display. It will make a big difference in your Manhattan.

Choosing your whiskey and vermouth should not be separate decisions as the two need to interact properly within your cocktail and deciding on the proper ratio of the two is vital. Though the original recipes generally called for a 1:1 ratio, more modern recipes call for more of a 2:1 ration, in favor of whiskey, though that varies to a degree. It will take some experimentation, to determine the proper balance that works best for you.

For example, a lighter bodied whiskey could be overwhelmed by a more powerful vermouth so you need to adjust that ratio, lowering the amount of Vermouth. In addition, some of the heavier whiskies need more vermouth to balance them out. If you have a sweeter whiskey, you might not want to mix it with a sweeter vermouth as the end result might be much sweeter than you desire. If you want a more savory Manhattan, then you might need to use less sweet Vermouth, or one will more herbal and spice notes. Everyone has their personal taste preferences so the ratio and combinations they desire will vary.

The third ingredient, Bitters, will help create the balance between the whiskey and vermouth. Gary Regan says that bitters are key: ''They bring together the herbal aspects of the vermouth and the forthrightness of the whisky and point up the best aspects of both." These bitters provide concentrated flavors, taking a larger role than might be understood as only a dash or two are commonly used. Although Angostura is the default type of bitters, others use Orange bitters as an addition or a substitute. You could also use almost any type of bitters, giving different flavored accents to your cocktail. Again, experimentation will help determine your favorite flavor profile.

Let's now consider an optional ingredient, the Garnish. Probably the most common garnish is the cherry, from the generic Maraschino cherry to the higher-end cherries soaked in brandy, bourbon or another alcohol. These all with add a little accent of a flavor to the cocktail, and maybe a touch more sweetness. Other common garnishes include a lemon or orange twist, which add a bit of citrus and acidity to the cocktail. My main recommendation is to use quality ingredients for your garnish.

At some restaurants and bars, though you can do it as home too, they barrel age their Manhattans, letting the prepared cocktail sit in a barrel for a time, maybe 30 days or so. This can provide some added depth and complexity to a Manhattan, as well as increase some of the spicy elements. I haven't aged any Manhattans at home yet, but will likely purchase a barrel in the near future to start doing so.