I am back again with a new edition of Thursday Sips & Nibbles, my regular column where I highlight some interesting, upcoming food & drink events.
**********************************************************
1) The Seaport Hotel and World Trade Center’s 5th annual Celebrity Holiday Tree Auction and Toy Drive Kick-off event will take place on Wednesday, December 7, from 6pm-8pm, and they have recruited a special guest to help make it the most successful year yet – and just in time as the need is greater than ever. For this year’s kick-off event, longtime Christmas in the City supporter and New England Patriots wide receiver Julian Edelman will be doing the first public reading of his newly released children’s book, Flying High, exclusively for attendees. Flying High is partially autobiographical; it is the story of a passionate squirrel that learns the value of hard work, with some other familiar New England faces making an appearance in the book as well.

Edelman will take part in a live auction which will include a one-of-a-kind Julian Edelman-themed Christmas tree decorated by the wide receiver and a select number of signed copies of his book will also be auctioned off – perfect for those looking for holiday gifts for young family members.

The evening will feature additional silent and live auctions, raffles and more as well as tasty nibbles and a cash bar provided by the Seaport Hotel & World Trade Center. 100% of money raised will go directly to Christmas in the City to purchase toys for children in need this holiday season.

Christmas in the City, a 100% volunteer organization, will hold its 28th Annual Holiday Party in December and is expecting to serve thousands more children this year – so they need more support than ever to meet the need. 5,000 children living in shelters, hotels or transitional housing will attend the celebration with their parent or guardian. The following day, Christmas in the City will give out toys and clothing, serving 13,000 more children whose families have fallen on hard times and otherwise might find nothing under the tree. The Seaport Hotel will once again serve as a drop-off location for toys; those donating can drop toys directly at the valet parking station or in the hotel lobby beginning on Tuesday, November 29th.

Admission price is a donation of $40. Guests are also asked to please bring ONE toy to donate.
Tickets can be purchased at: https://citctreeauction.eventbrite.com

2) To celebrate the restaurant’s One-Year Anniversary and express sincere gratitude to loyal patrons who’ve warmly welcomed the brand to Massachusetts, Frank Pepe Pizzeria Napoletana, located at The Shops at Chestnut Hill, will give away ONE FREE SMALL CHEESE PIZZA (takeout only, no exceptions) to every guest between the hours of 1:00PM and 4:00PM on Tuesday, December 13. Since opening last December, “Pepe’s” has enjoyed serving the Greater Boston community and is thankful for the support they’ve received.

Originally, founded in 1925 in New Haven, CT by Frank Pepe, who immigrated to the United States in 1909 at the age of 16, Frank Pepe’s Pizzeria Napoletana is nationally renowned for its Neapolitan Pizza baked in Coal-fired Brick Ovens.

COST: FREE (no purchase necessary) Offer is good for one free small cheese pizza (no exceptions) per guest. Takeout only.

TRADE Secrets Cooking Classes feature lively and engaging demonstrations, lunch with wine pairings and recipes to take home from Chef Jody Adams. Exploring the Mediterranean countries of Greece, Italy, France and Spain, the Trade Secrets Cooking Classes kick off in January and conclude in April. Held one Sunday afternoon each month, the intimate cooking classes feature welcoming coffee and scones on arrival followed by Chef Jody Adams teaching her tricks of the trade. After everyone has worked up an appetite, guests delight in a 3-course lunch with wine pairings and depart with printed recipe cards to recreate the once in a lifetime experience at home.

Trade Secrets Cooking Classes are $150/person per class and are held on the following dates, starting at 11am, with respective themes for each:
Sunday, January 15 – Greece,
Sunday, February 12 – Italy,
Sunday, March 19 – France,
Sunday, April 23 – Spain.

Space is limited and tickets to each class can be purchased at: http://bit.ly/2f5qLBW.

4) Chef/Owner Dante de Magistris of il Casale Lexington has teamed up with Mario and Luciano Ercolino, founders of Vinosia Wines to present an elegant dinner pairing Southern Italian fare with this exclusive line of Campania, Italy imported wines. Founded in 2003 by Mario and Luciano Ercolino, whose family founded Feudi di San Gregorio, the brothers set out on their own to create Vinosia, a new place of wine.

On Tuesday, December 6, at 6pm, il Casale Cucina Campana in Lexington will transport guests with a full Italian dining experience featuring Vinosia Wines. Guests are invited to indulge in a five-course menu with dishes created by Chef Dante de Magistris and wine pairings expertly selected by Vinosia Wines representative Mariella Zangaro, who is flying in direct from Italy for this special event. The flavorful, traditional ingredients Chef Dante uses in his dishes are prevalent in the Campania region of Italy and perfectly pair with Vinosia Wines where the vineyards wine making techniques extract the immense depth of the Irpinia terroir and grapes also of the same region in Italy.

Vinosia Wines was discovered by Dante de Magistris and his father, Leon, while scouting their family’s hometown region of Campania. Vinosia Wines immediately made the elite list of imported Italian wines carried by The de Magistris family, and for this one-night-only, you will have the opportunity to try five exclusive pours including Greco di Tufo, Aglianico, Taurasi, Aglianico di Irpinia and Primitivo di Manduria. 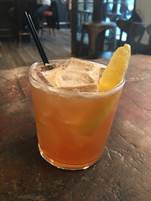 5) During a media interview, at Little Donkey, with Greg Davis, the Master Distiller at Maker's Mark, I had the chance to taste a new cocktail, the Beast of Bourbon ($12), which was created by Vikram Hegde, the Bar Manager at Little Donkey. Using Maker's 46, which is enhanced by aging in barrels with French staves, this was a tasty cocktail, the hint of cinnamon flavor adding to a holiday feel. You can get this cocktail at Little Donkey, or make it yourself at home.

Posted by Richard Auffrey at 9:36 AM