Gre.co: Gyros & Loukoumades For The Win 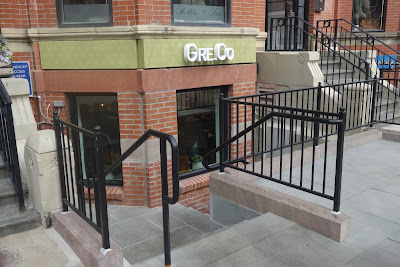 "Gyro, pronounced “GAEE-ro” in English and “GHEE-ro” in Greek comes from the Greek word “gheereezo,” which means to turn. As mentioned above, it’s a stacked rotating pile of thinly sliced meat, either lamb, pork, beef, or some combination thereof, with latter-day renditions that include chicken and even fish. As the tightly packed stack roasts upright, the layers meld together and the grill person manning the gyro rotisserie cuts of paper-thin slices, which he or she fixes in a pita wrap with tomatoes, raw red onions, parsley or lettuce, Greek yogurt or tzatziki, and sometimes fried potatoes and a sprinkling of paprika or cayenne pepper."
--Chef Diane Kochilas in History of Gyro, an Ancient Greek Street Food

Newbury Street has seen the recent opening of a fast casual restaurant worthy of much attention, one bringing delicious, freshly made, inexpensive and compelling Greek street food. Gre.Co (meaning Greece & Company) is the latest venture from Demetri Tsolakis, who is also a Partner at Committee (one of my favorite restaurants) and Cafeteria. With General Manager Stefanos Ougrinis and Executive Chef Alkis Sheri, the Gre.co team is creating tasty Gyros and Loukoumades and I'm impressed with the results.

“I am so proud to introduce a truly Greek concept that is truly fresh and can satisfy life on the go,” says Owner Demetri Tsolakis. “The ancient Greeks knew that great memories were made and lively conversations were sparked when people gathered around delicious food and drink. Fast forward to 2017, where people are starved for time, but still have a craving for the rich, flavorful recipes of Greece. With Gre.Co there is now a place that unites the old world with the new and allows today’s fast-moving generation to enjoy the authentic food they love—minus the wait.”

So far, I've dined at Gre.co twice, once as a media guest and once on my own, and I'll certainly be returning on a regular basis. In a recent rant, We Need More Specialized Restaurants, I stated how I wished to see more restaurants with limited menus, which specialize in one or a few items. Gre.co actually meets that desire, having a small menu, concentrating on two main items, Gyros and Loukoumades. With that specialization, they are able to concentrate on creating fresh, quality products. And as everything is made to order, they can also cater to some of your preferences. 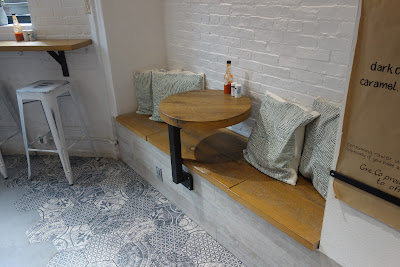 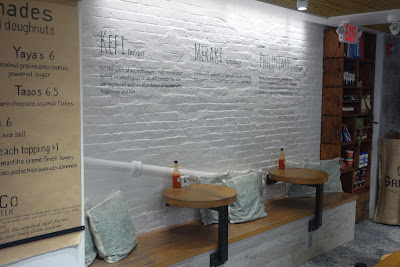 "The gyro as we know it more or less today first arrived in Greece in 1922,.."
--Chef Diane Kochilas in History of Gyro, an Ancient Greek Street Food

Upon entering Gre.co for the first time, I was initially struck by the alluring aromas of the kitchen, which is open, allowing you to watch everything they make as well as ensuring the wonderful smells of their cooking permeate the restaurant. It is a small place, with a long table in the middle that seats about eight people, a few "booths" on one wall, and some counter seating near the front window. When the weather improves, they will also have patio seating, which will be a great place this summer to sit and dine. On both occasions when I was at the restaurant, much of the seating was taken and they did a significant take-out business. Gre.co's popularity was quite evident. 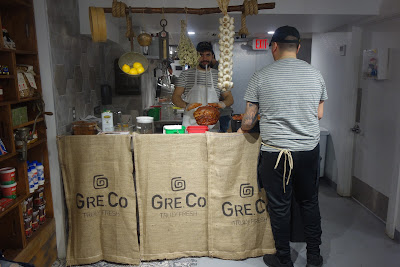 Gre.Co prepares its foods fresh each day, using a number of local meat purveyors, including Savenor's Market. They marinate all their meats for about 24 hours, using their own house-made marinades. They also use some locally sourced produce from Eva’s Garden and other nearby farms. 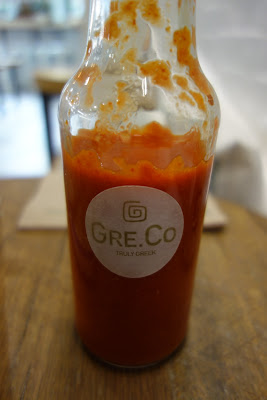 They even make their own Hot Sauce, using Greek Florina peppers, and it is spicy and flavorful. It can be a nice addition to your Gyro. 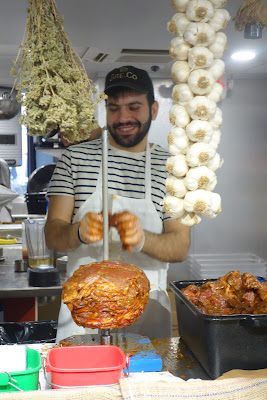 After the meats have been properly marinated, they are then thinly sliced and carefully placed onto the rotisserie. On another visit, I watched as they used a potato slicer to cut their fries, placing the whole, skin-on potato into the machine, pulling a lever, and having the potato slices ready for frying. They aren't hiding anything here. 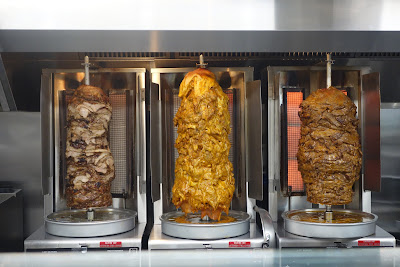 These are the rotisserie meats ready for slicing for the gyros and will excite any carnivore. This presents a compelling vision for customers who might be indecisive. 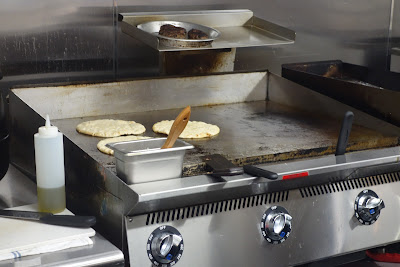 The Pitas are cooked on the grill, ensuring they are fresh and hot. For a bread lover like me, these pitas are excellent and I could use them for almost any sandwich. 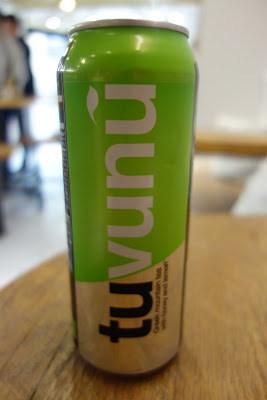 To accompany their food, Gre.co even offers numerous unique Greek beverages, and I'm sure most of you have never tasted many of these drinks before. Try a Frappe (traditional Greek iced coffee), Epsa (available in lime, lemonade of sour cherry), Mastiqua (Mastiha flavored sparkling water that aids in digestion), or Ouzon Soda (ouzo flavored soda). I've become a fan of their Tuvunu Greek Mountain Tea, which is made from Sideritis, an indigenous perennial. The tea is flavored with brown cane sugar, wild blossom honey, and fresh squeezed lemon juice. It was delicious, with only a mild sweetness, and pleasing tea notes and an herbal backbone. It is refreshing and you could easily drink can after can without feeling bloated or overwhelmed by sugar as you can be with soda. Next time, I need to try some of the other Greek drinks. 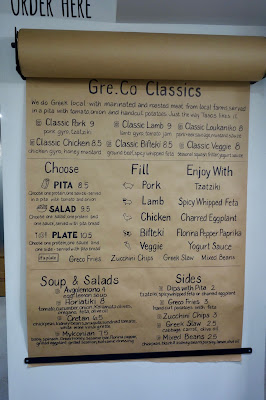 "There is actually a National Gyro Day and it is August 31st."
--Chef Diane Kochilas in History of Gyro, an Ancient Greek Street Food

The food menu is dominated by six different types of Gyros, all which are served in a warm pita with tomatoes, onions and hand-cut potatoes. The six Gyros (priced $8-$9) include the Classic Pork (with tzatziki), Classic Lamb (with tomato jam), Classic Chicken (with honey mustard), Classic Loukaniko (pork and leek sausage with mustard sauce), Classic Bifteki (ground beef with spicy whipped feta) and Classic Veggie (seasonal squash fritter with yogurt sauce). As everything is made to order, you can also customize your own Gyro, choosing your own protein and sauce combination. The Lamb and Pork are very popular, but it varies dependent on any specific day.

As a slight variation, you can also have a Salad ($9.50) or Plate ($10), selecting your own protein and sauce combination, and each also comes with pita bread. The Plate also comes with a side. You can order a salad on its own, including the Horiatiki ($8), Cretan ($6.50) and Mykonian ($7.50). There are also a small number of Soup & Sides, such as Avgolemono (egg lemon soup) and Greek Slaw. 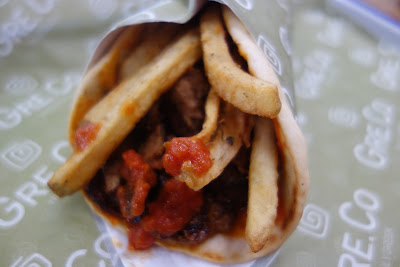 The Classic Lamb was packed with plentiful meat, which was tender and flavorful, and the tomato jam added nice acidity and a little sweetness to the gyro. The addition of the salty fries also enhanced the gyro. Overall, the gyro was good-sized, tasty, fresh and well balanced. Highly recommended. 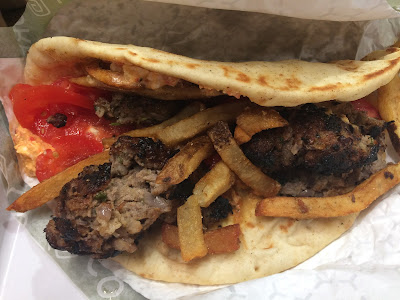 The Classic Bifteki also had plenty of meat, basically a hearty burger, with the spicy whipped feta that added heat and creaminess to the gyro. The acidity of tomatoes helped with the creaminess and the fries added that saltiness too. It might not be a traditional burger, but certainly was a tasty alternative.

Though I didn't have any of the salads, I saw several that others ordered and they looked excellent, filled with plenty of fresh vegetables. 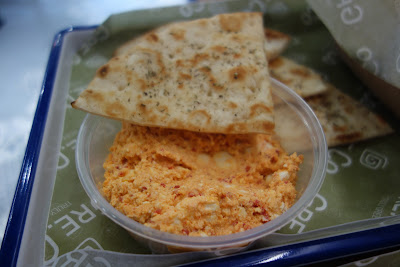 As for Sides, you can order the Dips with Pita ($2), selecting Tzatziki, Spicy Whipped Feta or Charred Eggplant. Above is the Spicy Whipped Feta, which has hot peppers mixed into the salty feta, and you receive plenty which you can smear on slices of warm pita. A fine afternoon or evening snack. 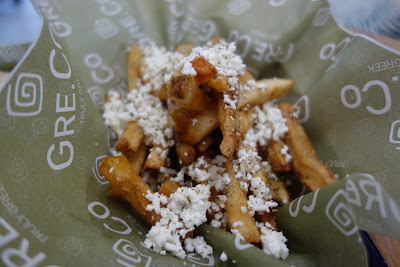 The Gre.co Fries ($3), hand-cut potatoes with feta, are addictive. The crisp fries, with a fluffy interior, are enhanced by the salty, creaminess of the feta. I think more restaurants should consider topping their fries with feta. 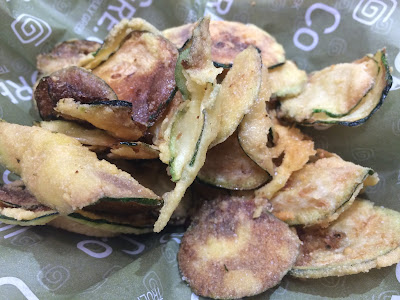 The Zucchini Chips ($3) are another compelling snack, and I've previously enjoyed them at Committee. I'm not usually a zucchini lover, but these thinly sliced, fried chips will persuade even the skeptic. And they are healthy than many other chips. 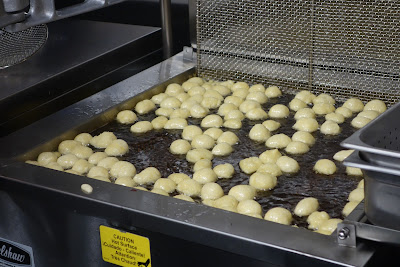 "The French have their beignets, Americans have doughnuts, but Greeks have loukoumades, round dough fritters drizzled with Greek honey and sprinkled with cinnamon."
--Chef Diane Kochilas

Gre.co's second specialization are their Loukoumades ($5.00-$6.50 for nine), basically Greek donuts. They come in five different flavors, and you can also customize your own as well. Their flavors include: Classic (Greek honey, walnuts and cinnamon), Yaya’s (hazelnut praline, oreo cookies, powdered sugar), Papou’s (mastiha crème, pistachios), Tasos (dark chocolate, coconut flakes) and Golpho (caramel, almonds, sea salt). It's worth stopping by Gre.co just for the loukoumades, anytime you have an urge for something sweet. 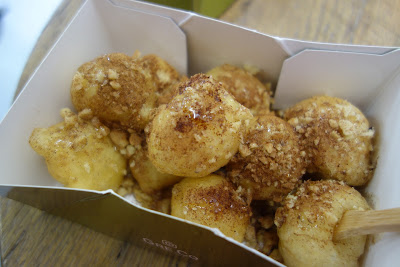 The Classic Loukoumades ($5) begins with a light donut hole, with a crisp exterior and the light, fluffy interior, are topped with a sweet and compelling mix of Greek honey, walnuts, and cinnamon. It's easy to devour one after another until you find the box is empty. The walnuts add a nice crunch to the donuts and the cinnamon is a nice addition to the sweet honey. 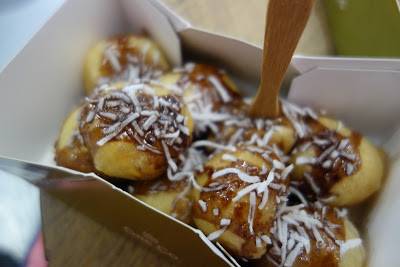 For the chocolate lovers, the Tasos Loukoumades will satisfy, with the rich dark chocolate and crunchy coconut flakes. 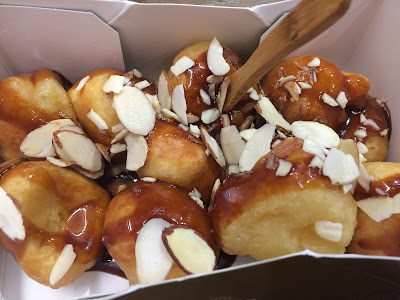 The Golpho Loukoumades ($6) have that tasty sweet & salty combination, with the addition of the thinly sliced almond pieces.

Of the three Loukoumades I tried, I liked the Classic the best, but enjoyed all three and could easily eat any of them again. Probably just depends on your preferences at any specific time, such as if you are in a chocolate mood or not. 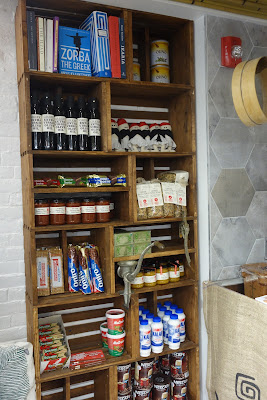 In one corner of the restaurant, they also sell a small variety of Greek-made products, from olive oil to pasta sauce, from candy to honey. This section may expand in the future, and Gre.co may also start selling their hot sauce. 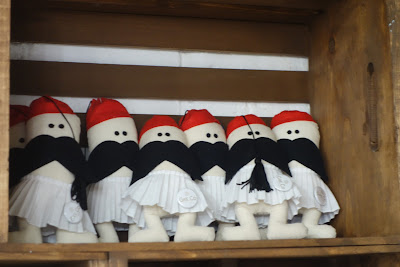 You'll even find Tasos, their mascot, for sale. 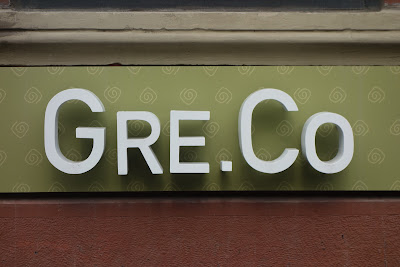 Gre.co has only been open for a short time but it is already impressive with its fresh, delicious, quality food. Service is relatively quick, with everyone working as a well-oiled machine to put together your made-to-order gyros and loukoumades. It is great they have chosen to concentrate on a small menu of items, and there is still something for almost everyone's taste. I'm sure their patio will be packed this summer. And maybe I'll see you there.
Posted by Richard Auffrey at 10:15 AM