My History of U.S. Sake Breweries Inspires A Journal Article 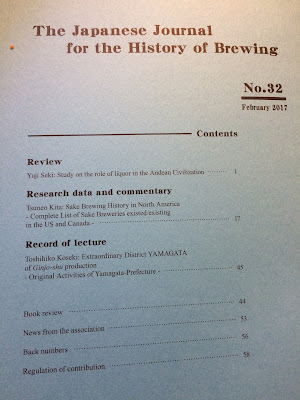 Back in April 2015, I posted one of my favorite articles, An Expanded History of Sake Brewing in the U.S., which discussed the early history of Sake breweries in the U.S. My research for this article included combing through hundreds of old newspapers, picking out tidbits of information that hadn't been previously collected into a single resource. It was a fascinating exploration, expanding my knowledge of this topic, and revealing intriguing facts which contradicted what many previously believed.

I also wrote a companion piece, Historical Tidbits About Sake In the U.S., noting a number of Sake references in U.S. newspapers from 1854 to 1926. Some of the references were positive while others were negative, reflective of racism against the Japanese. However, it is interesting to see these myriad views about Sake. 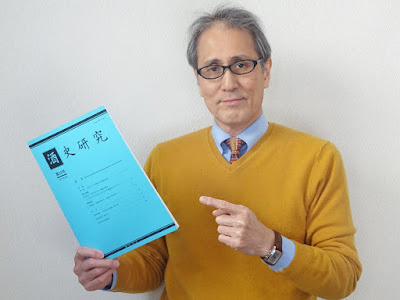 Since publishing the original article, I've been corresponding with Tsuneo Kita (the man in the above photo), who is the Representative Director of Kita Sangyo Co., Ltd., a company which creates packaging materials, from bottles to cans, and their customers include a number of Sake breweries. Tsuneo Kita is also very interested in Sake history and was intrigued by my article. We've have some pleasant discussions about a variety of Sake matters.

Recently, Mr. Kita was published an article, Sake Brewing History in North America‒ Complete List of Sake Breweries existed/existing in the US and Canada, in the The Japanese Journal For The History of Brewing (#32, February 2017). In the above photo, you can see the front cover of the journal, which is in Japanese. At the top of this page, you can see the English version of the journal's cover. The article, written in Japanese, is 27 pages long, and includes a few charts and photographs, building upon much of the history from my article. It is well worth seeking out this article if you can read Japanese. 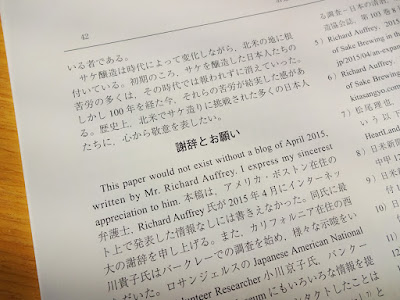 Mr. Kita also notes in this article, ensuring it was in English: "This paper would not exist without a blog of April 2015, written by Mr. Richard Auffrey. I express my sincerest appreciation to him." Within the article, there are also numerous references to my article. Mr. Kita sent me a copy of the journal, and I've been able to use Google Translate to get a rough translation. The article is not yet available online but hopefully it will end up there in the near future.

The history of Sake breweries in the U.S. is a compelling topic and worthy of additional research. The details of many of these early breweries has largely been lost and it would be great to uncover those hidden details.
Posted by Richard Auffrey at 9:31 AM