Shōjō: A Welcome Addition To Chinatown 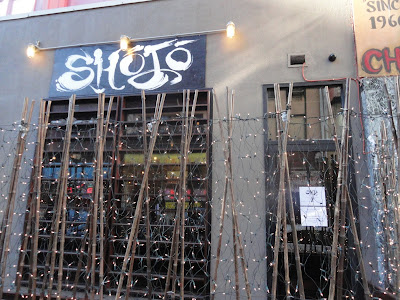 In Japanese mythology, a shōjō is commonly considered to be a water spirit that loves Sake. You'll find several legends about them that center around magical Sake, from Sake that can cure any illness to Sake pots that are always full, no matter how much your pour out. The legend has a Chinese origin and the term is sometimes translated as "orangutan" so that a few legends describe shōjō as resembling monkeys. In my first Tipsy Sensei story, Yurine's Pot, the legend of the shōjō played a pivotal role. With my interest in such matters, I was intrigued by a new Chinatown restaurant called Shōjō. 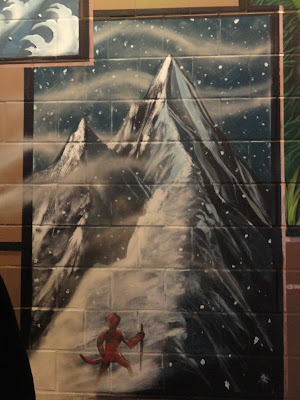 The restaurant opened last August but it wasn't until recently that I stopped by there for lunch. I was going to be in the area so decided to check it out. I learned from their Facebook page that during the month of January all of the items on their lunch menu were only $5. Sounded like a great time to sample a variety of their dishes inexpensively. However, their lunch menu was not listed on their website so I contacted their PR person to obtain a copy. My friend Jackie and I then dined there, and at the end of the meal we learned that the restaurant had comped our lunch. You can also check out Jackie's compelling review of our dining experience.

Shōjō is a small restaurant and bar, seating around 50 people, and located in the heart of Chinatown on Tyler Street. Its intent is to attract people to Chinatown who might feel intimidated by some of the more authentic and traditional restaurants. To that objective, its cuisine is Pan-Asian with a modern twist, a playful take on more traditional and authentic dishes. The restaurant is open for lunch and dinner and the menus change weekly "...depending on the availability of fresh and local ingredients." The walls have various paintings of a simian shojo on a search for a river of Sake. There is an enticing casual vibe about the restaurant. 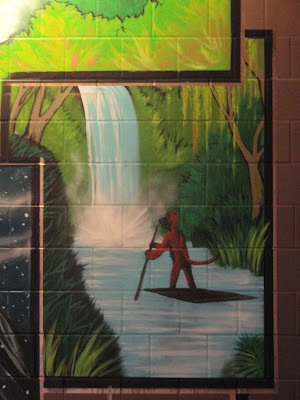 The usual lunch menu is divided into three sections, including Soup & Small Bites (8 items, priced $4-$8), Mains (10 items, most priced $7-$9) and Desserts (1 item, priced at $5). They have a list of vegetarian options too. The lunch menu we viewed at the restaurant was a bit different due to their anniversary special where all the items were priced at $5. There is plenty of diversity on the menu, and there should be something for all tastes and preferences. In addition, I feel it is reasonably priced, even considering the usual lunch menu prices.

I looked at their drinks menu, which intrigued me, but we didn't order anything to drink besides green tea. They have about nine Sakes, some Shochu and numerous unique cocktails. There are some good Sakes on the list though nothing especially unique. For a restaurant using a Sake legend in their decor and motif, I would have liked to see a greater number and variety of Sakes available on their menu. I am interested in trying some of their Shochu cocktails. 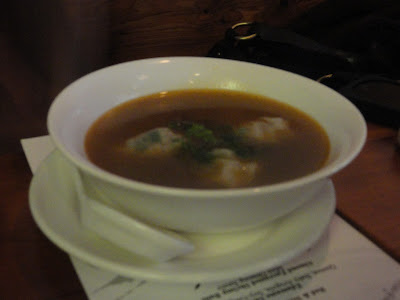 Overall, our food was delicious and satisfying and I am eager to return. The Red & Hot Wonton Soup (usually $5) is a perfect dish for winter, a savory and spicy soup with several small wontons. It was a good-sized dish and the broth seemed more intense and complex than the usual wonton soups served at many Americanized Chinese spots. A great way to start your lunch. 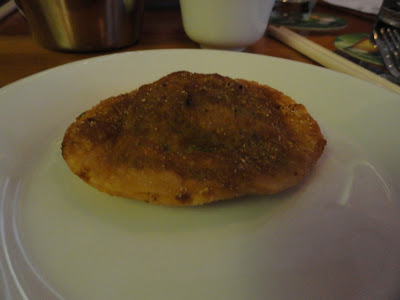 The Char Sui Empandas (which are not on the regular lunch menu) resembled a fried ravioli filled with a savory, moist chunk of pulled pork. A tasty starter which will appeal to everyone. 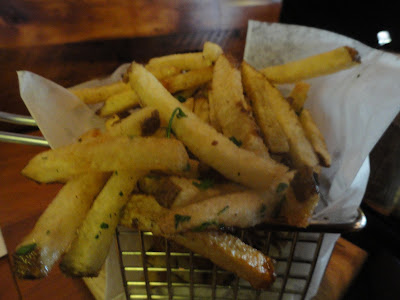 The Duck Fat Fries with Sirracha Aioli (usually $5) were addictive, crispy with a fluffy interior, and with that welcome flavor addition from the duck fat. A great bar snack with Sake or a cocktail. 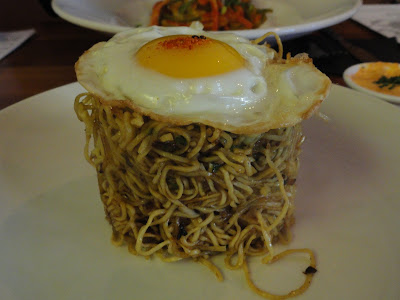 My favorite dish was the “Damn! Damn!! Noodles!!!” (usually $8), which comes with ground pork, bean sprouts, egg noodles, and Szechuan peppercorn though I had mine prepared without the sprouts. This is a twist on Dandan noodles, which are often found in Americanized Chinese restaurants made with a peanut butter sauce. Traditionally, no peanut butter is used. The fresh noodles were cooked nicely, with just the right amount of firmness to them, and the entire dish offered a delectable taste, savory, salty and rich, especially with the egg yolk. The crispy pork bits really added to this dish. I liked the presentation too and would highly recommend this dish. 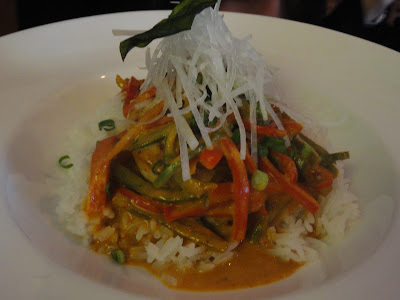 The Grilled Chicken Coconut Curry Over (usually $8), atop jasmine rice, was another winner of a main dish. A large, moist and tender boneless chicken breast was covered by a spicy curry with a rich coconut taste and some crisp veggies. This is another dish I would strongly recommend. 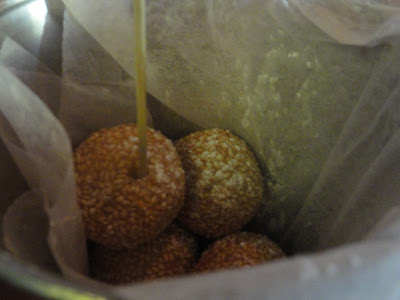 For dessert, we had some Chocolate Sesame Balls (usually $5), which are a twist on a traditional Chinese dish that usually contains Azuki bean paste. This was an interesting dessert, made from a glutinous rice flour which gave it a chewy texture, which was covered in sesame seeds, adding nuttiness, and then fried. The center contained rich, warm chocolate and made for an intriguing blend of textures and flavors. You might fight over who gets the last of these tasty treats. 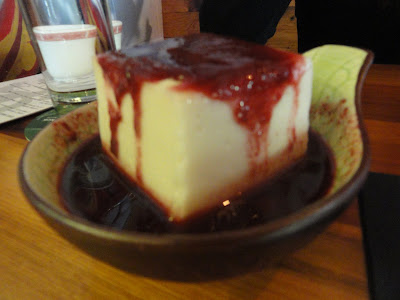 We also tasted a Coconut Jelly dessert, covered in a berry puree, which was ok, just not my preference. It had a different jelly texture, much firmer than the typical jello, panna cotta or similar dessert. The coconut flavor was mild and the berry taste seemed to overwhelm the coconut.

My first experience at Shōjō was very positive and I look forward to my next visit, to try more of their dishes and to delve into their drinks menu.  I like the fact the menu changes frequently, so you will find something new all the time. This is not the place to go if you are seeking authentic Chinese dishes. Rather it is a spot where you go to enjoy their playful takes on traditional cuisine, a great entry spot for newcomers to Chinatown who might feel intimidated in more traditional spots. However, even if you love traditional Chinese food, it is well worth visiting here for their unique take on Asian dishes.

Richard - I've been excited to try this place since they first opened. Very interested in the 'new' Chinatown that is slowly developing.

I've been wanting to try Shojo since they opened! The noodles look great and I'm sure I would love those chocolate sesame balls.