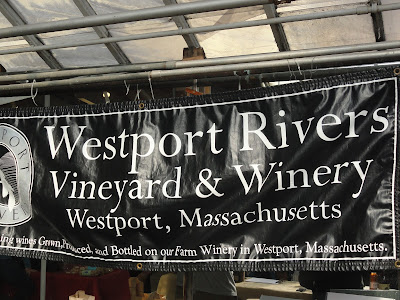 Can vitis vinifera, the common wine grape, grow well in Massachusetts? Can it produce delicious Chardonnay and Pinot Noir wines, or should local wineries purchase their grapes from outside of the state? Should Massachusetts concentrate more on growing hybrid grapes or making fruit wines?

Consisting of about 80 acres, the largest vineyard in Massachusetts, and possibly all of New England, is owned by Westport Rivers Winery, which was founded in 1986. The owners believed the climate and soil at their site was an excellent location for a vineyard, and their wines give proof to their belief. They only produce wines made from grapes they grow on their vineyard, such as Chardonnay, Riesling, Rkatsiteli, Pinot Blanc, Pinot Gris, Gruner Veltliner, Muscat and Pinot Noir.

I lasted visited the winery over six years ago though had enjoyed their sparkling wines for a few years before that. About seven years ago, when I began blogging with a group of friends at the Real World Winers site (now defunct) and before I started The Passionate Foodie, the 2001 Westport Rivers Brut Cuvee RJR Sparkling Wine was one of our most highly recommended wines. Since that time, I have generally only seen their sparkling wines available at local wine stores. Their still wines were elusive but I now wish more shops would carry them, so that they were more readily available. I also need to make a trip down to the winery again, maybe this spring, to learn more about everything they are doing.

Westport Rivers recently sent me samples of two of their sparkling wines, the 2006 Brut Cuvee RJR and the 2001 Blanc de Blancs Brut. Then, this past weekend, the winery had a table at the Wayland Winter Farmers' Market and I had the opportunity to taste and be impressed by several of their still wines and one apertif/dessert wine. Their winemaker, Bill Russell, is producing plenty of wines of which he should be proud, showing the potential for Massachusetts wines produced from locally grown grapes. 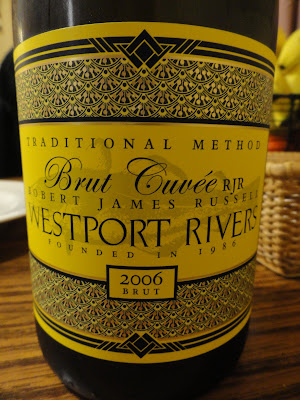 The 2006 Westport Rivers Brut RJR ($34.99) is produced from a blend of about 70% Pinot Noir with the remainder Chardonnay and a touch of Pinot Meunier. It spent over four years in tirage, was disgorged about eight months before release and has a dosage of 0.8%. This is a compelling sparkling wine with a fine golden color and a pleasing nose of toast and citrus. On the palate, it is clean, dry and crisp with lovely green apple and toasted bread notes. It has a nice depth of character, a long satisfying finish, and will remind you of a nice Champagne. It is not inexpensive but I think it can compare well to Champagnes at a similar price point. 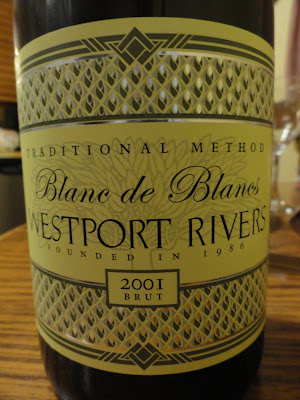 For New Year's Eve, I chose to open the 2001 Westport Rivers Blanc de Blancs Brut ($45), produced from 100% Chardonnay. It spent about ten years in tirage, was disgorged a little over eight months before release and has a dosage of 0.2%. This is a superb sparkling wine that is well balanced and possesses great complexity. It has prominent acidity, is very dry and has intriguing notes of green apple, toast, pears and hints of other elusive flavors that will tantalize your palate. I was extremely happy that I opened this bottle to bring in the New Year, starting off the year with a fantastic local wine. At this price point, I think it competes very well with similarly priced Champagnes. It gets my highest recommendation. 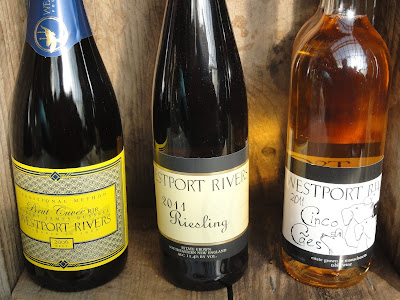 As for their still whites, I tasted three of them and enjoyed all three. The 2011 Westport Rivers Chardonnay ($18) is a blend of 80% oaked Chardonnay and 20% unoaked, made in a more French style. It is crisp and dry with bright apple and citrus flavors and only a touch of richness from the oak. An excellent food wine, it is also pleasing on its own. The 2011 Westport Rivers Riesling ($18) is also crisp and dry, with bolder citrus flavors and hints of tropical fruit. Easy drinking and food friendly, this is another delicious wine from their portfolio.

I was intrigued by the 2011 Westport Rivers Cinco Cães ($18), a unique white blend of Rkatsiteli, Pinot Gris, Gruner Veltliner, Muscat and Chardonnay. Cinco Cães, a Portuguese phrase that means "five dogs," is named for five dogs they owned, four Labrador retrievers and an Azorean cattle dog. Though an easy drinking wine, you might at first overlook its complexity. A fascinating blend of aromatics with tastes of green apple, pear, citrus, and herbal notes. It is crisp and delicious, with a lengthy finish and after having a glass, you are going to crave another and then another. Highly recommended. 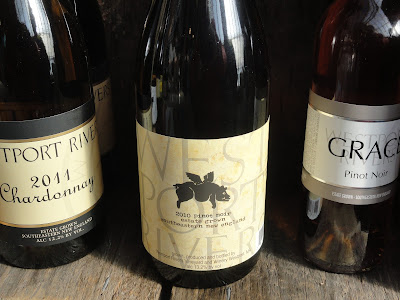 How do red grapes fare in Massachusetts? Westport Rivers grows Pinot Noir but they have only produced a still wine from Pinot Noir twice, including the recent 2010 Westport Rivers Pinot Noir ($25). Most of their Pinot Noir ends up in their sparkling wines. About 600 cases were made of the 2010 Pinot. It was a light bodied wine, with tasty notes of cherry and ripe plum along with a mild earthiness. Mild tannins, an alcohol content of 13.2% and a pleasing finish. A Pinot that is sure to appeal to many wine lovers.

Pinot Noir also figures into a fascinating apertif/after dinner wine, the Grace Pinot Noir ($25). The winery sends out some of their Pinot Noir to a distillery to make a brandy. When the brandy is returned, they add some Pinot Noir juice and age it for five years in French oak. Five different vintages are blended together and the end result has a powerful alcohol content of 17.5%. It is going to remind you of an aged Tawny Port in some respects with its intriguing flavors of caramel, dried figs, dark cherry and other savory notes. There is only a hint of sweetness in its rich and luxurious mouth feel. Unusual and compelling.

Massachusetts can be proud of Westport Rivers, making true local wines that will intrigue and satisfy wine lovers. Seek out their wines and you can look forward to more coverage from me of this compelling winery.
Posted by Richard Auffrey at 3:00 AM

We did a wine tasting at Westport Rivers this past summer and enjoyed everything we sampled. The area itself is just so pretty too. My only complaint was the place was so popular, so many people talking far too loudly in a relatively small and confined tasting room.