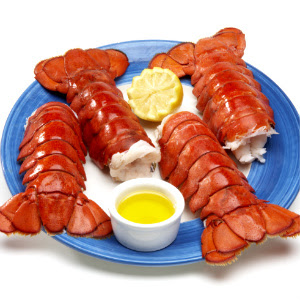 Maine Lobster. There is no substitute.

Those of us who live in New England are a bit spoiled, having many options to find and enjoy Maine lobster, from local restaurants to food markets. We can get it in the shell, or buy just a pound of lobster meat. We can savor it in a lobster roll, lobster bisque or lobster mac n' cheese. Last weekend, I enjoyed a couple lobsters, in the shell, at an end-of-summer party in Ipswich, dipping the sweet meat in melted butter.

For those outside of New England, you can still enjoy Maine lobsters, and other New England seafood favorites, by getting it shipped to you. You'll find plenty of places selling & shipping lobsters and seafood so how do you decide which company to patronize? Not an easy decision. And it won't be cheap either, especially considering shipping costs. However, enjoying a Maine lobster dinner can be such a special experience that it can be worth the cost.

And importantly, what should you drink with your lobster and seafood? Champagne? White wine? Red Wine? Beer? Or maybe even Sake? 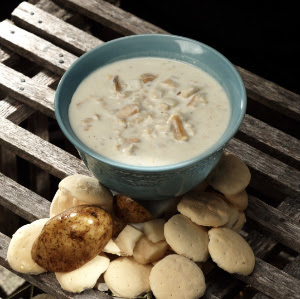 Joe Bowab, the CEO of Lobster Anywhere, recently sent me some free lobster and seafood samples and my plan was to pair them with Sake, to show its advantages, as opposed to wine, when paired with seafood. Lobster Anywhere, which has been online since 1999, sells Maine lobsters, and a variety of other seafood, which can be shipped across the country. You can get lobsters in the shell, lobster meat or a number of lobster dishes, such as lobster ravioli. They also sell chowders and soups, crab cakes and scallops & bacon, and much more, including steaks. You can order these as individual items or as part of larger dinner packages.

Prices are not cheap, but when they are compared to other, similar companies, their pricing is probably around average, with some items cheaper while others a bit more expensive. What will help differentiate these companies then is quality and service. With some online research, I found only a single complaint about LobsterAnywhere's service, and it appeared more an honest mistake than indicative of any endemic problem. I also found plenty of very positive feedback about the company which is reassuring.

I received some frozen lobster tails, clam chowder & scallops wrapped in bacon. They were delivered on time, and packed well to ensure everything remained frozen. Accompanying the seafood was a small, helpful guidebook of cooking advice and recipes. The lobster tails were fresh frozen, not pre-cooked, and only needed about four minutes of steaming to be ready to eat. I kept it simple, enjoying the lobster with melted butter, though it could have been used in a variety of recipes. The clam chowder came in a 20 ounce Cryovac pouch which just needed to be heated in boiling water for 10-12 minutes. The scallops just needed to be cooked in the oven for 10-15 minutes. As you can see, preparation for these items was simple and relatively quick.

As for the taste, I was satisfied and had no complaints. The lobster tasted as if it came right out of the shell, with a nice sweetness to the meat. You would never know that it had been frozen to any degree. The clam chowder was flavorful, with just the right amount of thickness, and it was certainly a chowder I would order again. The large scallops were tender and meaty, the salty bacon adding a nice component to the sweeter scallops. LobsterAnywhere showed me the quality of their products. 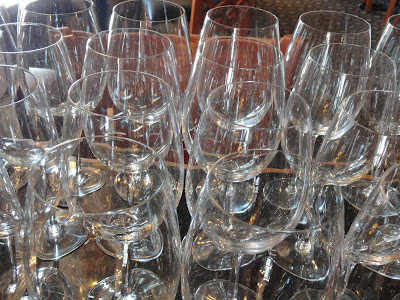 What alcohol should you drink with seafood? White wine seems the default, and traditional, pairing choice for seafood, though plenty of people now support red wine as a valid pairing as well. However, there is a potential problem with pairing wine, especially red, with seafood and that is sometimes the wine makes your seafood have an off putting, fishy taste to it. Good seafood shouldn't possess a fishy taste and any wine that causes such a taste is a terrible pairing.

Japanese researchers have determined that the iron content in some red wines is one of the culprits responsible for that fishy taste. If the iron content of your wine is more than 2 milligrams per liter, then your seafood is likely to taste fishy. The iron content depends on many factors, from the vineyard soil to conditions during fermentation but a consumer has really no way to know how much iron is in their wine, so pairing a red wine with seafood is always a risk. Scallop is one of those seafoods which is especially prone to acquiring a fishy taste, and if I had paired my scallops & bacon with a red wine, I risked a fishy taste.

Though white wine generally doesn't have the same issue with iron, they also can create a fishy taste in some seafood. Sulfites in wine, both white and red, may contribute to a degradation of unsaturated fatty acids, which can also lead to that off-putting fishy taste. More study is still needed of that phenomenon, as well as determining any other reasons for why white wine sometimes creates that fishy taste. Instead of pairing seafood with wine, you might want a safer alcohol, one which possesses great diversity and taste. Like Japanese Sake. 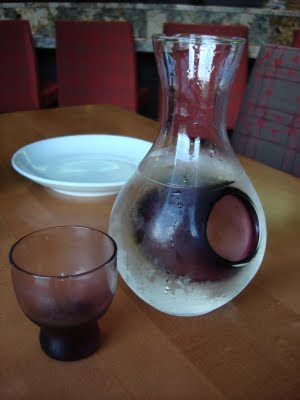 Why is Sake such a great match for seafood? Traditionally, the food that commonly accompanied Sake was known as sakana, and seafood was a major component, from raw fish to dried seafood. Historically, the Japanese people understood that seafood made for an excellent pairing with Sake. In addition, Sake is a diverse beverage, that ranges from dry to sweet, herbal to fruity, elegent to rich, and much more. That means there is a Sake that will fit any type of seafood, from oysters to crab, sea urchin to tuna. In addition, there is logic and science supporting this pairing.

First, Sake possesses no sulfites, which avoids one of the potential problems that faces wines and seafood. Without those sulfites, there is much less worry of your seafood acquiring a fishy taste. Second, Sake is made from rice, where water is far more important than soil. In general, Japan's water is more soft than hard, meaning there is much less iron in their water. In addition, iron adversely affects Sake, and can turn it a reddish brown while compromising its aroma and taste. As such, Sake brewers only use water with a minuscule amount of iron, far less than the amount that would cause fishy problems like red wine.

Third, Sake possesses twenty amino acids, more than any other alcohol and seven times more than red wine. Some of these amino acids help to neutralize fishy flavors in seafood, as well as gamey flavors in meat. So, Sake also takes a proactive role in reducing such off-putting flavors, something wine does not do. Not only does Sake avoid problems like sulfites and iron, it also makes an effort to reduce potential fishiness. It is important to note that cooking seafood and meat in Sake will have that same effect, to help mute fishy and gamey flavors.

Besides glutamic acid, umami can also be caused by inosinate and guanylate, two nucleotides. Thus, the pairing of Sake with foods containing inosinate or guanylate creates a synergistic effect that intensifies that umami taste, an ultra-savoriness. Tuna, mackerel and sardines all contain relatively high amounts of inosinate while shrimp and cod have significant amounts too. Smaller amounts of inosinate can also be found in snow crab, sea urchin and nori. Plus, snow crab and nori have small amounts of guanylate. They make for excellent pairings with Sake. 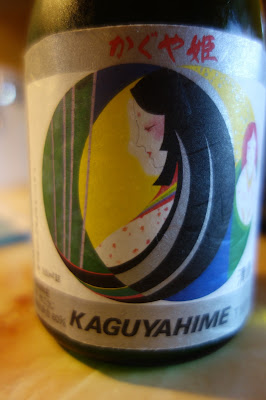 For my seafood feast, I drank two different Sakes, both Junmai, feeling that the richness of the Sake would especially go well with the rich lobster. The Kaguyahime Junmai was produced by the Yamamoto Honke which was founded in 1677 in Kyoto. It was made with Biwaminori rice, milled to 60%, and it has a Sake Meter Value (SMV) of -2, meaning it might have a hint of sweetness. It only has an alcohol content of 14.5% and the label states the Sake even goes well with "butter sauted asparagus." This Sake is made from soft spring water called Shiragikui, which translates as "water of white chrysanthemum."

This Sake is smooth and light, with subtle flavors of melon, pear and mild honey notes. It is not as rich as many other Junmai Sakes, but was still able to hold up to the lobster. It would be a nice introduction for those unfamiliar with Sake, though Sake lovers will enjoy it as well. It went well with all of the seafood, and it didn't cause any fishy tastes. I bet this would also be an excellent pairing with briny oysters. 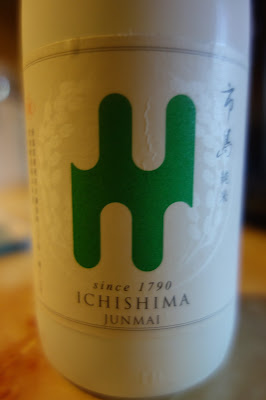 The Ichishima Junmai was produced by the Ichishima Brewery, which was founded in 1790, and is located in the Niigata Prefecture. In 1976, Ichishima became the first Sake brewery to employ licensed female toji, brew masters, though they had been employing women in other positions since 1965. It was made with a blend of Gohyakumangoku and Koshiinuki rice, milled to 65%, and it has a Sake Meter Value (SMV) of +4, meaning it tends to be dry. It has an alcohol content of 14.9% and its label states it is a great match with "richer, heavier fish, as well as sea urchin."

This was a more typical Junmai, with a richer texture, though still a crisp and smooth taste. The taste was a melange of pleasant flavors, including melon and apple, with hints of smoke and minerality. This was also an excellent pairing for the seafood, and there were absolutely no problems with fishiness. The richness of this Junmai and the lobster were heavenly, and it also stood up well to the clam chowder, with its blend of spices. Another winner. 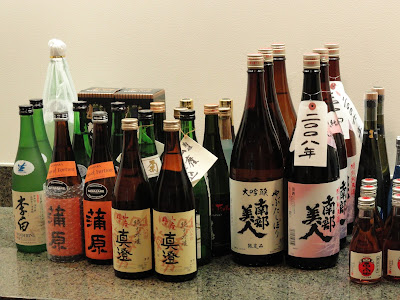 “O what an ugly sight the man who thinks he’s wise and never drinks sake!”
--Ōtomo no Tabito

When you are enjoying seafood, you should consider pairing it with Sake, which offers advantages over wine pairing. You will have a reduced chance of negative, fishy tastes and there will be an enhanced savoriness to the pairing. Don't be intimidated by Sake, and instead learn about its wonders. In the end, you will find a new favorite.
Posted by Richard Auffrey at 3:00 AM

I know from dining with you that Sake pairs extremely well with seafood. Thanks for that eye opening education. You've convinced me that Sake and wine can sometimes pair with food in ways that are so much better than wine. The technical reasons you give supporting Sake pairing better with food than wine might all be true, but I have so many wonderful wine/seafood pairing memories to lean on that I am not sure the technical evidence is as important to note as the prospect of lost pairing discovery from pairing sake with seafood always, and with wine, less.

Pairing perfectly is but one spot on the spectrum of wine and sake enjoyment.

Hi Adam:
I fully agree. I am not trying to convince people to only drink Sake with seafood, merely to point out reasons why it may work better in a number of ways. Both white and red wine can work with seafood, and can be quite compelling. Like Muscadet & Oysters.

So glad that we dont have to argue:)

Nice job Richard, keep the sake pairing advice coming. Funny how often wine folks can talk about pairing a Sauvignon Blanc, Pinot Grigio, or Sparkling wines with sushi and other sorts of fish dishes, when sake is such a natural.

John Phanchalad at JP Digital Tech have a very good track record in digital media marketing. For more you can visit on http://johnphanchalad.com/merry-christmas-from-john-phanchalad/