Franciacorta: Bubbly That Needs To Be On Your Wine Radar 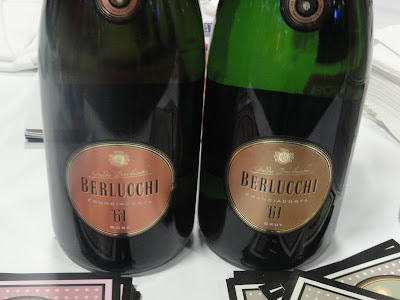 Though Franciacorta is made in Italy, Prosecco and Asti Spumante are far more popular and well known, monopolizing the spotlight. While working at the wine store, I have had plenty of people ask me about Prosecco, and a few about Asti, but not a single person has ever asked about Franciacorta. It can be difficult to find Franciacorta on local restaurant wine lists or even in wine stores. However, it is worthy of attention, for both its quality and often value pricing. Franciacorta needs to be on your wine radar.

Located in Lombardy, in the province of Brescia, the territory of Franciacorta is a small, hilly region and its history extends back thousands of years. Wine was produced in this region for at least a couple thousand years, and ancient Romans, such as Virgil and Pliny the Elder, wrote about them. Though "Francia" is the Italian term for "France," the name of the region does not apparently derive from this definition. Though there is some disagreement, the name likely derives from the Latin term "curtes francae," which referred to small communities of Benedictine monks who lived near Lake Iseo, and were excused from paying taxes because of their help to the community.

For most of the region's history, still wines were produced, and it was not until the 1960s that sparkling wines start being created. Guido Berlucchi, who owned a winery in Franciacorta, hired Franco Ziliani, a young enologist, to assist with his winery. Franco was full of enthusiasm and ideas, and desired to produce a sparkling wine. Guido allowed him to do so, and in 1961, they produced their first bubbly, Pinot di Franciacorta, which was also the first time that the term "Franciacorta" appeared on a wine label.

The sparkling wine soon became popular, and other local producers started creating their own too, trying to join this new trend. The story of how the creation of this sparkling wine spread is probably quite fascinating. In 1967, the region was awarded DOC status, though that was probably more for their still wines, though by 1983, the DOC rules were revised and referenced sparkling wine.

This region has undergone such an amazing transformation in 50 years, starting from nearly scratch to become a high quality producer of sparkling wine. Obviously the terroir plays a significant role, as well as the determination, passion and skill of the winemakers. Their production continues to grow each year, and I am sure their quality will also continue to improve. This is a region to keep your eye on, one which will only become more popular over time.

Franciacorta is produced in the méthode traditionnelle, similar to Champagne, and is produced from only three grapes: Chardonnay, Pinot Noir and Pinot Bianco. About 82% of their vineyards grow Chardonnay. Unlike in Champagne, the date of disgorgement must be placed on a Franciacorta label, though some Champagne producers are voluntarily listing it on their labels. Some of the aging requirements for Franciacorta are also a bit longer than Champagne.

Franciacorta is produced in a number of styles that are listed in the DOCG regulations, including:
--Franciacorta: Produced with Chardonnay, Pinot Noir and up to 50% Pinot Bianco.
--Franciacorta Saten: Essentially a blanc de blancs, which is usually predominantly Chardonnay but can contain up to 50% Pinot Bianco.
--Rosé: It requires at least 25% Pinot Noir and the rest can be Chardonnay and Pinot Bianco
--Millesimato: This is a vintage wine, and must consist of at least 85% wine from a single growing year. It cannot be released until at least 37 months after harvest.
--Riserva: This is also a vintage wine, and can be a Satèn or Rosé as well. It must have matured sur lie for a minimum of 60 months.

All of these styles will possess a specific dosage level, just like a Champagne, including: No Dosage, Extra Brut, Brut, Extra Dry, Sec/Dry or Demi-sec.

The connection of Franciacorta and food has significantly helped in its popularity in some circles, including Japan which has a number of Italian restaurants where Franciacorta is celebrated. In Italy, Franciacorta also has a partnership with Slow Food Italia. This could be a key to increasing popularity in the U.S., showcasing Franciacorta's versatility with food, and trying to get it into many more restaurants. I rarely see Franciacorta on wine lists in the Boston area, though know that The Beehive, carries one, the Ca' del Bosco Cuvée Prestige, but on their website, it is not even identified as a Franciacorta.

Tonight, I will be sampling 6 Franciacorta wines, from 6 different wineries, as part of a media Twitter Tasting with some winery representatives participating online as well. I'll be drinking this wines with a few friends, with a variety of foods, also testing the wine's versatility in pairings. Next week, I will likely report back on my reviews of those wines.

The next time you make a brindisi, a "toast," then why not raise a glass of Franciacorta?
Posted by Richard Auffrey at 3:30 AM

A nice primer on Franciacorta, Richard.

"Franciacorta may be the best sparkling wine that many people know nothing about. " Absolutely agree!

I've visited the region twice in the last two years and can't get enough of the Franciacorta bubbles. Just wish we had more access to more Franciacorta here in SE Virginia. Look forward to tasting & tweeting tonight.