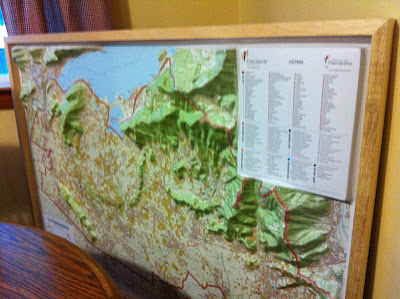 Last Friday evening, a couple drinking companions and I had the delightful opportunity to taste six Franciacorta wines as part of a Twitter tasting arranged by Balzac Communications. Above, you can see a relief map of the Franciacorta region, which I gave a seat at the table during the tasting, to add some atmosphere to the tasting. You can check out some basic information about the region and its sparkling wines in my prior Franciacorta post. 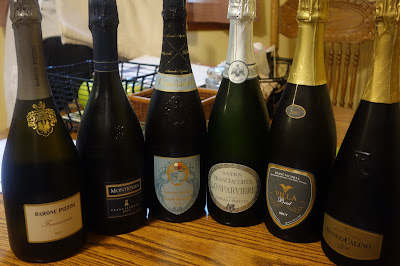 The six Franciacorta wines each possesses their own unique aromas and taste, though they possessed some commonalities as well. You won't confuse these with Prosecco or Asti Spumante, though you could with some Champagnes. They most reminded me of Grower Champagnes, and not the basic House Champagnes. These were serious sparkling wines, sure to bring enjoyment to the palate of most wine lovers. All of the Franciacorta possessed tiny bubbles, no frog's eyes here, and they all were delicious in their own ways. Priced from $25-$37, these wines also present a good value, and it would be difficult to find Champagne of comparable quality at those prices. Locally, Franciacorta is tough to find, though there are a number available through local distributors so you could ask your favorite wine shop to order you some. You won't be disappointed. 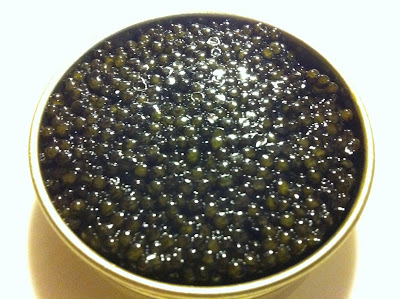 Prior to the official start of the tasting, I dined on some spicy Chicken Vindaloo and sampled some of the Franciacorta with my dinner. The pairing worked for me, the Franciacorta helping to battle against the heat of the dish. During the tasting, we broke out some caviar (pictured above) and cheese. The organic Canadian caviar, decadent and briny, made a killer pairing with the various Franciacorta wines. Champagne & caviar has long been considered an excellent pairing, and the Franciacorta didn't disappoint in the least. This is a moan-inducing match, well worth the splurge. Franciacorta is food friendly and I would love to try it with a Risotto alla Milanese, which is also from the Lombardy region. Maybe the next time I make a Risotto, I'll pair it with some Franciacorta. 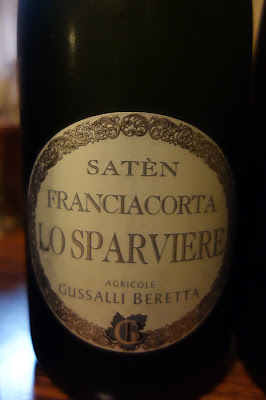 Franciacorta and firearms? Yes, as the first wine in our line-up, the NV Lo Sparvierre Saten ($25), is from a winery that is owned by a famous firearms manufacturing company, Fabbrica d'Armi Pietro Beretta. The Beretta company was established back in 1526 and is currently owned and operated by Ugo Gussalli Beretta and his sons, Franco and Pietro. They also own three wineries, under the umbrella of Agricole Gussalli Beretta, including ones in Abruzzo and Chianti Classico. The Lo Sparvierre estate consists of about 150 hectares, 30 which are vineyards. The term "Sparvierre" means "sparrowhawk" and is on the coat of arms which was in the original 16th-century building on the estate.

The NV Lo Sparvierre Saten is produced from 100% Chardonnay, from the youngest vineyards, and 80% was fermented in stainless steel and the other 20% was fermented in the barrel. It spent about 24 months sur lie, has an alcohol content of 13%, and an annual production of approximately 20,000 bottles.With a light gold color, the nose presents floral notes as well as hints of toast and citrus. The dry, silky texture gives way to delicious flavors of green apple and lemon, accented by a mild toastiness. A fine start to the tasting.

The second wine of the evening was the NV Barone Pizzini Brut ($35), from a winery that was founded in 1870. It was the first winery in Franciacorta to adopt organic viticulture and in 2001, all their Franciacorta vineyards attained the organic certification. The vineyards cover a total surface area of 47 hectares (about 116 acres). In 2006, they constructed an eco-friendly winery and have been working at making another of their vineyards biodynamic.

The NV Barone Pizzini Brut is produced from a blend of 90% Chardonnay and 10% Pinot Noir, which was fermented in stainless steel, spent about six months aging in stainless and has an alcohol content of 12%. It had a brighter gold color, and seemed to be a more intense and complex wine than the prior one. There was more toastiness, with bright flavors of apple and pear, and elements of minerality. The finish was longer as well, and in a blind tasting, people would be hard pressed not to think this is a Champagne. 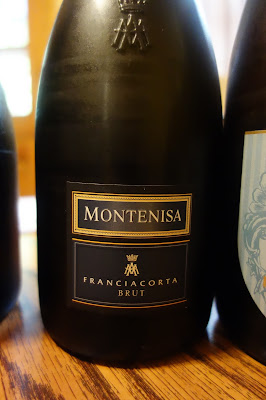 We moved on to the NV Montenisa Brut ($37), produced by a winery that was established in 1999, a joint endeavor between Marchesi Antinori and Conti Maggi. There are about 60 hectares of vineyards on the estate.

The NV Montenisa Brut is a blend of Chardonnay, Pinot Bianco and a little percentage of Pinot Noir, with an alcohol content of 12.5%. It is fermented in both stainless steel and barrique, and remains sur lie for at least 30 months. The riddling is all done by using typical pupitres (trestle tables). After degorgement, the bottles are not released for another three months. This seemed to be a more fruit driven wine, with tasty notes of apples, melon, lemon and peaches, though there are still toasty notes complementing the fruit. Excellent acidity, a lengthy finish and plenty of complexity and depth. A bit more hedonistic than the prior two wines. Another winner from Franciacorta. 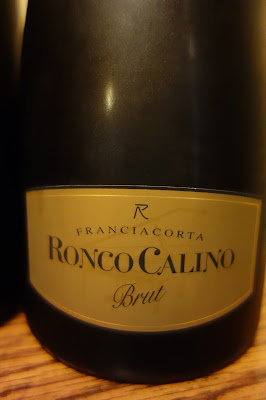 The NV Ronco Calino Brut ($30) is from a winery founded in 1996 by Paolo Radici, an indutrialist seeking a quiet retreat. Paolo purchased an old estate that belonged to Arturo Benedetti Michelangeli, a famous pianist. They produce about 70-80 thousands bottles each year.

The NV Ronco Calino Brut is a blend of 80% Chardonnay and 20% Pinot Noir, and 80% is fermented in stainless steel while the rest is fermented in French oak. The wine ages sur lie for at least twenty months before disgorgement. The nose presents lemons and floral notes, leading to a taste of lemon, pineapple, vanilla and hints of toast. Dry, crisp and refreshing. Quite tasty bubbly. 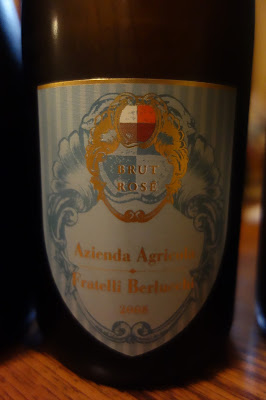 The 2008 Fratelli Berlucchi Rosé ($27) is produced by the winery which brought sparkling wine to Franciacorta. Guido Berlucchi hired Franco Ziliani, a young enologist, to assist with his winery. Franco was full of enthusiasm and ideas, and desired to produce a sparkling wine. Guido allowed him to do so, and in 1961, they produced their first bubbly, Pinot di Franciacorta, which was also the first time that the term "Franciacorta" appeared on a wine label. 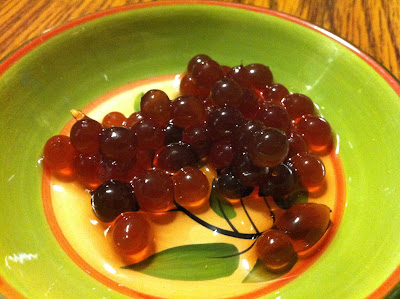 The Rosé is produced from a blend of 70% Chardonnay and Pinot Blanc, with 30% Pinot Noir and an alcohol content of 12.5%. About 25,000 bottles are produced each year. Light pink in color, it possesses a nose of bright red fruits and hints of spice. On the palate, there are delicious and delicate taste of strawberry, cherry, and raspberry with toasty notes and a backbone of minerality. Like a fine Provence Rosé, this was a well balanced and compelling wine, with nice acidity, a long, satisfying finish and a subtle complexity. I loved this Rosé! In addition, I paired it with some Strawberry Pearls, and each liquid burst of a pearl, was enhanced by the delicious red fruit of the wine. 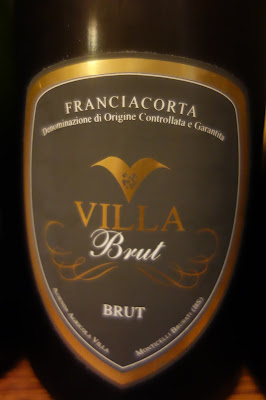 My favorite wine of the night was the last one in the tasting, the 2007 Villa Franciacorta Brut ($35), an amazing vintage wine that is also an excellent value at the price. In 1960, Alessandro Bianchi purchased the hamlet of Villa, whose buildings date to the 16th century, and a hundred hectares of land surrounding it. Wine had been made in Villa for centuries, and Bianchi continued that tradition.

The 2007 Villa Franciacorta Brut is a blend of 80% Chardonnay and 20% Pinot Noir, which was fermented in stainless steel and then aged in barriques. It was aged sur lie for at least 60 months, and is only produced in excellent vintages. This elegant sparkling wine is silky smooth, incredibly complex and possesses such a wonderful melange of flavors including apples, pears, toast, and spice. Well balanced, there are depths of flavor and a lengthy finish that you don't want to ever end. By the end of the evening, this bottle was empty, as my drinking companions also loved this Franciacorta. It receives my highest recommendation, and drinks like a wine at twice the price, if not more.

These six examples of Franciacorta were all pleasing and show the high quality and taste that is produced in this region. This bubbly can compete with sparkling wine from anywhere in the world, and deserves far greater attention from wine lovers than it receives. And at these price points, they offer excellent value, making them more than just a splurge wine. Seek out these wines, broaden your palate and I am sure you'll find some new favorites.
Posted by Richard Auffrey at 3:00 AM