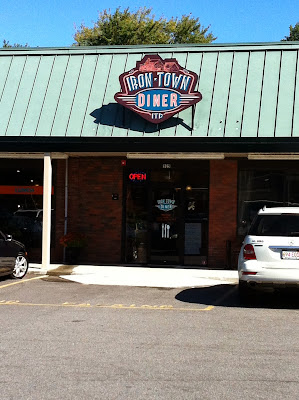 Unlike Sugar Mamas's Cafe, the Iron Town Diner doesn't make homemade cinnamon rolls but it is local so you don't have to journey to Oregon for a good breakfast.

The Iron Town Diner is located in the Village Park Shopping center on Main Street in Saugus, at the former site of J.Pace & Son. It has been open for only several weeks but I have already dined there multiple times. As it is new, it is still working out a few issues but is headed in a very positive direction and I have no issue recommending it for breakfast and lunch (and note that it closes every day at 3pm so does not serve dinner).

Breakfast is available all day and the menu includes all of the basics, including eggs, omelets, pancakes, French toast, waffles, breakfast sandwiches and more. They offer some interesting variations on the basics, such as Nutella & Banana French Toast, Sweet Chocolate Chip Pancakes, and Strawberry Belgian Waffle. They also have a number of different Eggs Benedict and Omelet options. Nearly everything is priced under $10 (except for Steak & Eggs at $10.99) and as an example, Two Eggs With Meat (plus home fries & toast) costs $6.99. 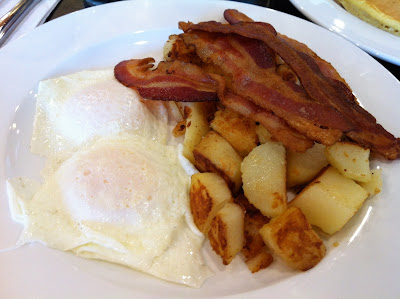 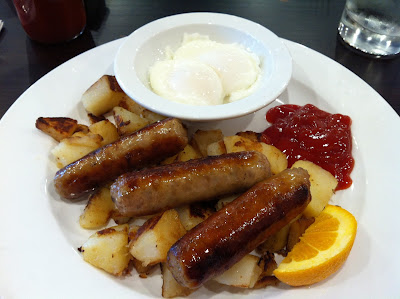 The Iron Town Combo ($9.79) includes two eggs (any style), home fries, choice of meat, and either two slices of French toast or pancakes. On one visit, I got eggs over easy with bacon while on another I chose poached eggs and sausage. The eggs were all cooked perfectly, the home fries had a nice crisp edge to them, and the bacon was crisp and meaty. Simple foods but prepared well. 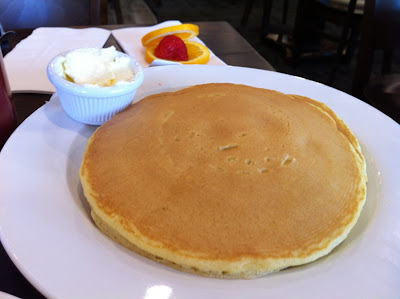 I also tried both the pancakes and French toast, and they were both good choices. The pancakes are quite large, taking up much of the plate, and were mostly light and fluffy, not the heavy, cakey versions you find in many places. I am picky about my pancakes but these make the cut. The French toast is also tasty, with a good eggy texture. They come with powdered sugar but if you don't want it, just ask them to omit it (which I do). 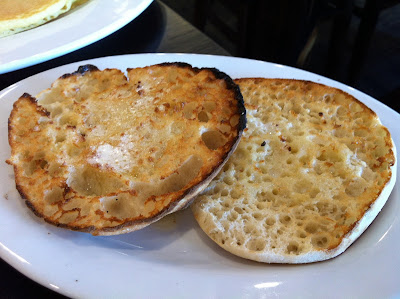 Rather than toast, you can opt for a jumbo English muffin.

The Lunch menu includes salads, sandwiches, burgers, entrees & more, with most items under $10 except for primarily the entrees, which are still under $14. The Entrees include dishes such as Steak Tips, Fish & Chips, and Open Faced Roasted Turkey. As for sandwiches, there are Deli sandwiches (from hot pastrami to tuna melt), Pockets & Wraps (from souvlaki to grilled chicken caesar), and Clubs. There are also usually daily specials available, such as Eggplant Parmigiana. 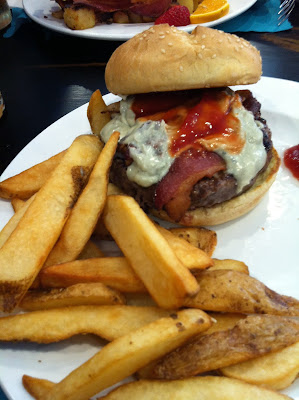 The Gorgonzola & Bacon Burger ($8.49) comes with French fries, spicy fries, coleslaw, potato salad or Caesar Salad. I opted for the fries which are steak fries, one of my favorites. The burger is large enough to cover the entire sesame seed bun, was cooked a nice medium, and still was juicy. I enjoyed the tang of the Gorgonzola and the crisp, salty edge of the bacon, both which complemented the burger. For the price, this is a good burger and something I would order again. 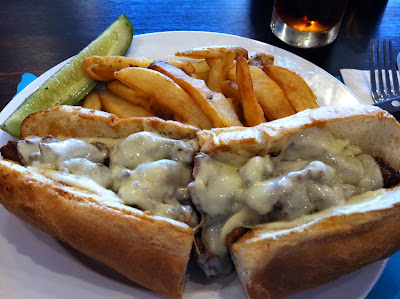 The Steak Tip sub, a new addition to their menu, was smothered in cheese and the tips were tender and savory. No tough steak here. The roll was also fresh and soft, though the rear fold of the roll did get a bit soggy and came apart. Taste wise though, I had no complaints.

There were a few service issues on some of my visits but I chalk that up to the newness of the restaurant, and I expect them to clear up in the near future. They resolved all of the issues promptly and the servers are generally accommodating and personable. The food is tasty, reasonably priced and quantities are good. It has become one of my top, local breakfast spots and I recommend that my readers check it out.

Richard, my family and I had breakfast here last Sunday. It was delicious! Few service kinks to work out, I agree. But, the food was really good - we'll be back!