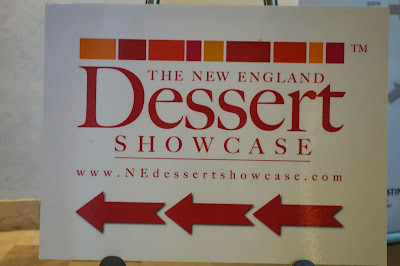 Last weekend, on Saturday morning, I journeyed to the Westin Boston Waterfront for what would be a nontraditional breakfast. Though you could find danish there, much of my breakfast consisted of sweeter treats, including whoopie pies, chocolate, ice cream, gelato, brownies, cupcakes, popcorn and much more. Dessert for breakfast? This was not the first time that I have done so, and there was a reason for my seeming gustatory madness. 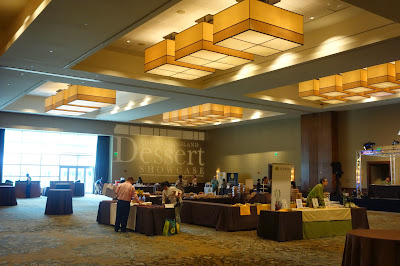 Once again, it was time for the annual New England Dessert Showcase, in its fifth year, hosted by The Anthem Group, a Boston-based marketing and event agency. There were numerous local exhibitors, each offering a sweet treat or two (or even more).  As the media hour started at 10am, this was my breakfast. I attended last year's event and you can find my prior Top Three choices here. None of my prior choices attended the event again this year.

For this year, I shall again provide my Top Three picks, those desserts which I most enjoyed and which were new to me. I strongly encourage all of my readers to seek out these companies and taste their treats. 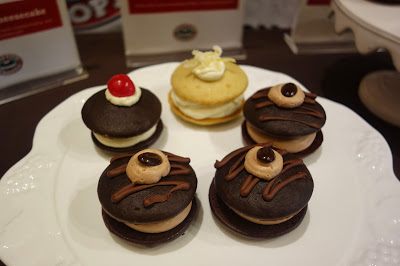 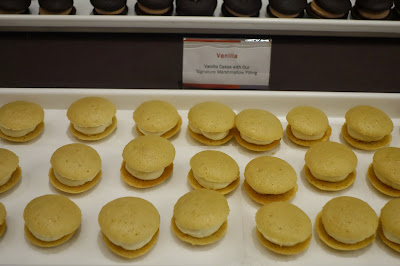 Boston Whoopie
The first dessert I tasted at the Showcase was their mini Vanilla Whoopie Pie with a marshmallow filling (shown in the second photo). The cake was moist while the creamy filling wasn't overly sweet and complemented the vanilla of the cake. I also tried the Chocolate, which also had the marshmallow filling, and it was just as tasty. A whoopie pie is a great way to get an even distribution of cake to frosting/filling when you bite into it, a better method usually than a cupcake.

The company is very new, having just started in March 2013 in Somerville. Their Whoopie Pies are primarily available through online ordering, only in the Greater Boston area, though they are available for sale at a few spots listed on their website. Their Whoopie Pies come in two sizes: Regular (3.5" round/$4) and Small (1.75" round/$2). They sell around 15 different flavors, including seasonal ones, including Pumpkin Spice with cinnamon cream cheese frosting, Raspberry Coconut, Red Velvet,Oreo Cookie and more.

Whoopie pies are starting to get more attention and Boston Whoopie is making some delicious ones. 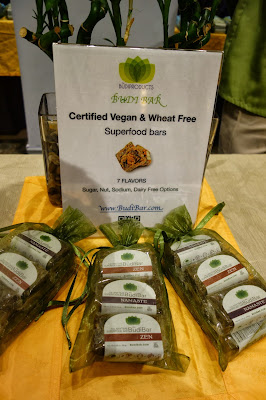 BudiBar
I can honestly say that I almost walked past this table without stopping when I noticed their sign for Certified Vegan & Wheat Free Superfood Bars. That doesn't sound like an appealing dessert to me but I remembered the "healthy" snack bars I tasted the previous year from Kind Snacks so I decided to stop and give them a chance. I am glad that I did. I met Michael McCarthy who created the Budi Bar in 2010, with an initial goal of creating a food to enhance brain function. “Budi” is an Indonesian word that means "wise."

Since their beginning, the scope of their bars has expanded to be very allergy focused as well. They use ingredients which possess "high antioxidant levels, mind balancing Omega-3 fatty acids, mind focusing amino acids, and natural ingredients that time release energy without causing sugar spikes." For example, they use Chicory Root Fiber as a binder and a substitute for milk and sugar, helping to protect against allergies. Because of potential nut allergies, they sometimes use sunflower seeds. Online, the bars are available for about $3/bar.

No matter how healthy they are though, the key is how they taste. And in that regard, they are a winner too. 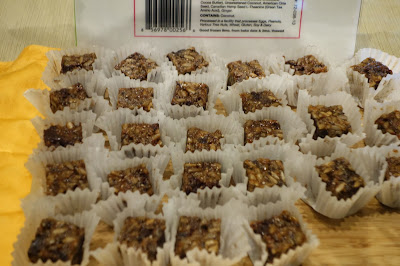 The Zen BudiBar is made from 80% Dark Chocolate and is nut & dairy free.  It contains Belgian Chicory Root Fiber, Sunflower Seeds, Chocolate Liquor (100% Swiss Cacao), Vegan Chocolate (Cane Sugar, Unsweetened Chocolate, Cocoa Butter), Unsweetened Coconut, American Chia Seeds & Canadian Hemp Seed, L-Theanine (Green Tea Amino Acid), & Ginger. It tastes sweet and nutty, with a nice chocolate taste and intriguing spice notes. It doesn't taste healthy and it does seem like a delightful dessert. If you have allergies or not, this bar is going to appeal to you. 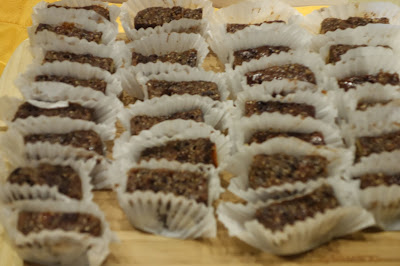 The Namaste BudiBar is also made from 80% Dark Chocolate, is dairy free but does contain nuts, almonds. It contains Belgian Chicory Root Fiber, American Almond, 100% Swiss Cacao, Guatelmalan Organic Taza 80% Dark Chocolate (Cacao Beans, Cane Sugar, Cocoa Butter, Vanilla Bean), Unsweetened Coconut, American Chia Seeds & Canadian Hemp Seed. Like Zen, this bar was sweet and nutty, with plenty of chocolate taste and enjoyable almond pieces. And once again, it doesn't taste healthy. I would recommend this bar as well and hope my readers will look past the "healthy" signs and simply enjoy the fine taste of these bars. And if you have allergies, you'll be able to safely enjoy these treats, without any sacrifice of taste. 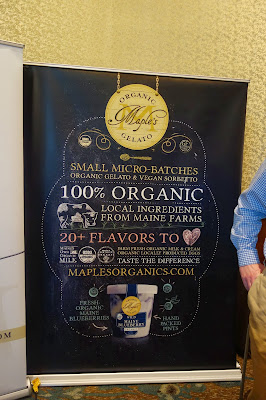 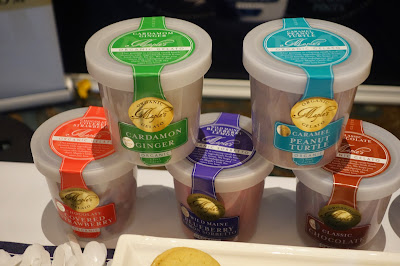 Maple's Organic Gelato
Artisan gelato is hot right now, and rightfully so. Maple's makes all of their flavors from scratch, and do not use any bases or pre-made flavorings. They obtain many of their ingredients from local providers, including organic farm-fresh milk, organic cream and organic eggs. You can even download a list of all the ingredients in their products. That is being transparent.

Besides gelato, they also make vegan sorbetto, and combined make over 25 different flavors, including such things are Vanilla Bean, Chocolate, Maine Maple, Thai Coconut, Cardamom-Ginger, Sea-Salt Caramel Almond, Wild Maine Blueberry, Red Raspberry Sorbetto, and Coconut Lime Sorbetto. I tried a few different flavors and all of them were creamy with pronounced flavors that didn't taste artificial. The Sea-Salt Caramel Almond was a pleasant balance of sweet & salty while the Cardamom-Ginger had nice spicy elements, that were also well balanced. The Coconut Lime Sorbetto tasted creamy, with a dominant coconut flavor, despite the fact it possesses no dairy.

You can visit their scoop shop in Yarmouth, Maine, or find their gelato and sorbet at some supermarkets and artisan food shops. Stay away from the overly processed ice creams and seek out this organic gelato and sorbetto.
Posted by Richard Auffrey at 3:00 AM