Battle Of The Burger: The Winners 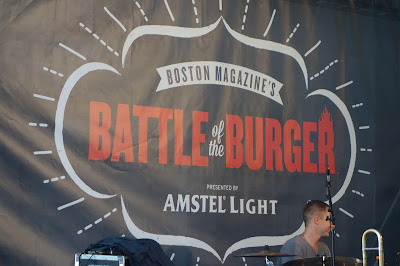 Thirty-two Burgers battled for supremacy but only one could be named Champion. Who reigned supreme?

Recently, Boston Magazine hosted the 4th Annual Battle of the Burger, a grand competition and homage to the ever-popular burger. Thirty-two restaurants and chefs competed, each offering their own unique take on the burger. You can check out the list of competitors and see which burgers sound appealing to you. I attended this event, as a media guest, tasting my way through 21 of the entries, carefully selecting which burgers to taste, before I was too full to taste any more burgers. I chose to leave some of the choices, like the vegetarian burgers, for the very end, in case I wasn't able to taste everything.

The event was held at the Cruiseport Boston which made for a nice venue. The burger tasting tables were held outside, though beneath a ceiling which provided protection from the sun. There was also an area of wine bars, beer booths, Grillo's Pickles, and more which was inside, as well as another outside area, on the waterfront. It made for a festive atmosphere and though it got busy later in the evening, it still wasn't too crowded, which was partially due to how much space the event took up. I generally chose to drink a dry and pleasant Barton & Guestier Rosé wine with my burgers. 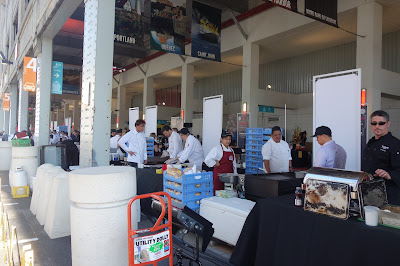 Attendees got to vote for their favorite burger. which raised a few questions in my mind. Should the winner be the type of burger you would crave to eat once a week? Or should it be something more unique but which you wouldn't want to eat more than maybe twice a year? After pondering this for a time, I decided that a champion burger should be something you would savor on a regular basis. A one-trick pony burger might be exciting but it wouldn't satisfy in the long run. A champion should be able to stand the test of time,rather than be a single isolated incident.

Most of the burgers that were served more mini-burgers, not full-sized ones. Preparing these smaller burgers presents different challenges than making larger-sized burgers. Should this actually be called a Mini-Burger Battle? Or should the chef have to prepare full-sized burgers and provide attendees pieces of each such burger? Does a mini-burger adequately show what a diner would enjoy at the restaurant if they ordered a normal sized burger? 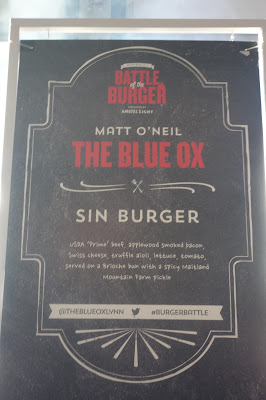 Last year's Battle of the Burger Champion was Chef Matt O’Neil of The Blue Ox in Lynn, making it his second Championship.  His winning entry was the Sin Burger, made with USDA ‘Prime’ beef, Applewood smoked bacon, Swiss cheese, truffle aioli, lettuce, and tomato, served on a Brioche bun with a spicy Maitland Mountain Farm pickle. This year, Matt announced that this would be his last year as a competitor, Could we win for a third time?

At the event, I thought that he would win again, based on the long lines at his table. No other competitor had anywhere near as long a line. People seem to know and love the Sin Burger, and I am a fan as well. In the end, my thoughts turned out to be correct and Matt became the Burger Champion for a third year, going out with a bang. Kudos to Matt and if you haven't dined at his restaurant, The Blue Ox, you definitely need to go.

I now want to highlight two of my other favorite burgers, both which I think could become Champions next year. Let me preface this though by stating that though I enjoyed a number of burgers, my biggest complaint was that some of the burgers lacked balance. They generally had numerous ingredients and one or more of those ingredients overpowered the burger, so that you failed to appreciate the rest of the flavors. It might have been too much bun or a sauce or other ingredient that was too strong. It can be a delicate balancing act, to ensure all the ingredients contribute to the whole rather than become too dominant. 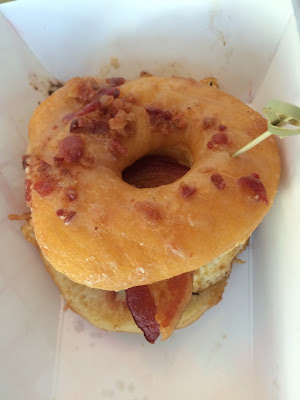 Let me provide an example. The Living Room offered The Olympic Body burger, by Chef Frank Schattauer, which was a 8 oz. grilled Angus patty, Shaller & Weber Double Smoked Bacon, American cheese, and an over easy egg, served on a housemade maple, bourbon, and bacon glazed donuts. On its face, it is intriguing, a type of breakfast burger sandwich. Other restaurants have also created burgers using donuts as buns. It might not be something I would eat too often but as an occasional treat it might be fun. Unfortunately, for my palate, I felt that the maple flavor was too dominant and overpowered the rest of the sandwich. Without that maple, I might have enjoyed this burger much more. The burger, bacon and cheese were all tasty on their own, but got lost in all that maple. 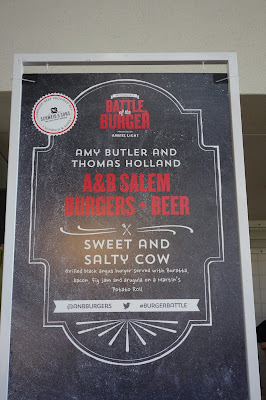 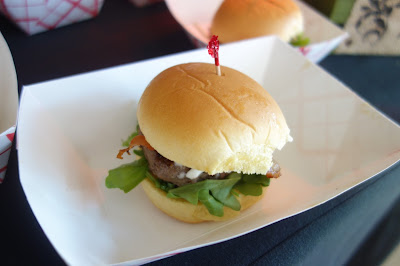 Onto my other top two winners.

The first burger I tasted at the event ended up being one of my favorites. The Sweet & Salty Cow was made by Chefs Amy Butler and Thomas Holland from A&B Burgers in Salem. I have to note that they are moving their restaurant to Beverly around October. I really like the name of this burger, which was a grilled Black Angus burger with Buratta, bacon, fig jam and arugula on a Martin's Potato Roll. The juicy and flavorful burger was enhanced by the balanced sweetness and saltiness of the other ingredients. The burrata also added an additional creaminess which was a nice alternative to other types of cheese. Balance and great taste made this a winner. I was impressed enough that I now need to check out this restaurant to taste more of their burgers. 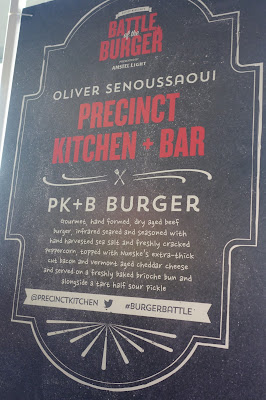 My other favorite was from Precinct Kitchen & Bar who offered a simpler burger, the PK+B Burger created by Chef Olivier Senoussaoui. It showcased how quality ingredients can make simplicity absolutely delicious. In addition, they offered quarter slices of a normal-sized burger rather than individual mini-burgers. Their burger was made from dry aged beef, infrared seared and seasoned with hand harvested sea salt and freshly cracked peppercorn. It was then topped with Nueske's extra-thick cut bacon and Vermont aged cheddar cheese and served on a freshly baked brioche bun. From my first bite, which burst with flavor, I was enthralled with this simple burger. This is the type of burger I could easily eat every week, reveling in its taste. It wasn't a showy burger and didn't contain any strange ingredients, but it was very satisfying. 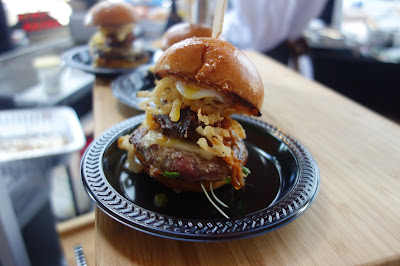 What were your favorite burgers at the Battle?
Posted by Richard Auffrey at 4:00 AM

This is a great place organize an event; they have great staff and great events put on here! I had nothing but great times and great conversations there. They served slider and shrimp cakes as appetizers at event venues Seattle with chicken skewers, and eggrolls that had veggies on the inside and some kind of creamy fruit sauce on top.