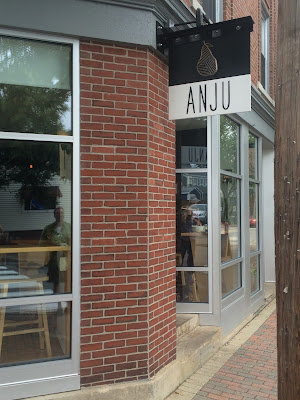 It seems many people think Kittery, Maine, is just about the discount outlets. Sure, the outlets can be fun for shopping, however the culinary options are lacking in many respects. You'll mostly find chains like McDonalds, Burger King, and the Weathervane. Bob's Clam Hut is one of the exceptions and a good option. However, there is more to Kittery than the outlets and you would benefit from exploring other areas of Kittery, including the Foreside neightborhood.

The Foreside neighborhood is located across the water from Portsmouth, New Hampshire, and it has become a small area dedicated to music, arts and cool food spots. Earlier this week, I visited Dan Ford of the Blue Current Brewery, a new Sake brewery in Kittery, and he introduced me to a few of the food options in the Foreside area. I was impressed and will be returning again in the near future to explore more of the culinary offerings. Food lovers need to put Kittery Foreside on their radar. 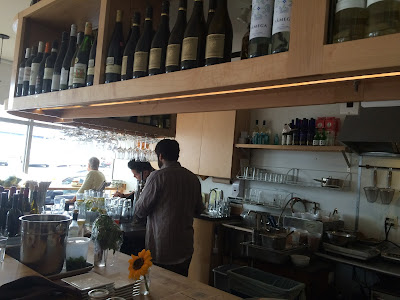 We began our exploration by having lunch at the Anju Noodle Bar, which is owned by Gary Kim and Julian Armstrong. The term "Anju" is a Korean word which roughly translates as food intended to be consumed with alcohol. The concept seems similar to a Japanese izakaya, Anju is open for lunch and dinner every day except Mondays. It is a small restaurant, with about 38 seats, including a counter area and a small number of tables. It has an intimate vibe and was fairly busy on a mid-afternoon Tuesday. I can easily see this place being packed at night, especially on weekends. 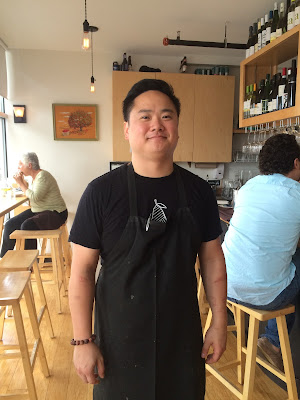 I got to meet one of the owners, Gary Kim, who has worked at previous restaurants including Pesce in Portsmouth and The Black Birch in Kittery. His partner, Julian Armstrong, has also previously worked in a number other restaurants and has also been involved in wine sales. In 2013, they opened Son-Mat Foods, a company to make Korean kimchi and other similar products, and then in 2014, they opened Anju Noodle Bar, They have garnered some well deserved raves though it is clear that more people need to know about this interesting and delicious restaurant. 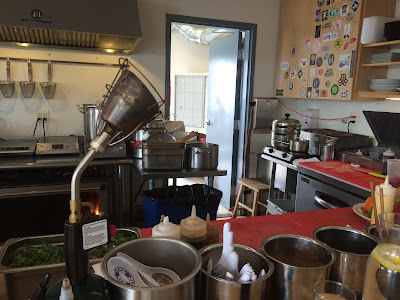 We sat at the counter and it overlooks both the bar and tiny kitchen, so you can watch the chefs preparing your dishes and marvel at how they accomplish so much in such a small space. They make their own kimchi and hot sauce. Their Menu was divided into Small Plates ($6-$12), Medium ($9-$11), and Mains ($13-$18). It is an eclectic menu in some respects, as you'll find dishes including Meat Balls and XO Roasted Corn alongside more traditional Asian dishes such as Okonomiyaki, Ramen and Shrimp Toast. You can also get sides of different Kimchi ($4). I found plenty of the menu which appealed to me, ending up selecting three dishes to sample. 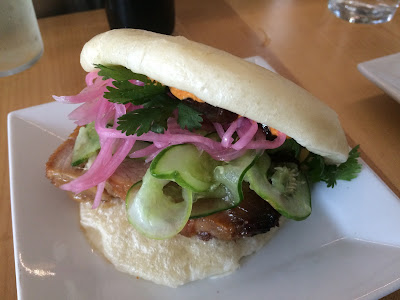 The Pork Bun ($6) is made with cucumber, pickled red onion, hoisin, and kimchi  mayo. As you can see, the bun is packed full, and included a large, tender rectangle of pork. It was a tasty blend of textures and flavors, sweet and salty. The bun was soft and slightly chewy and it was a good value for the price. If you don't want meat, you could instead try their Eggplant Bun. 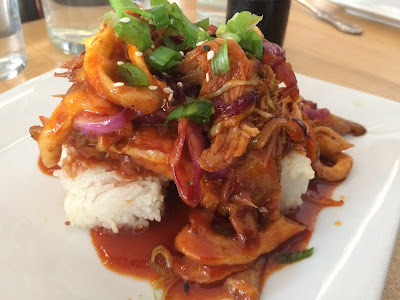 The Rice Cakes ($11) are made with onigiri. 5-spice duck confit. and dragon sauce. It is an ample dish with lots of tender, flavorful duck, some crunchy rice, and an intriguing sauce that added a little spicy heat. There were some unknown veggies in the dish, which I didn't ask about, but they only added some flavor and texture to the dish. It earns a hearty recommendation. 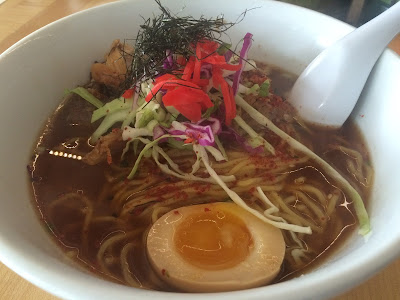 The Shoyu Ramen ($13) is made with MEat bone broth. tare. slow-roasted pork shoulder. ajitama soy egg. and nori. The bones comes from MEat, the butcher shop next door which sources animals from local farms, and their noodles come from Sun Noodle. I was impressed with the depth of flavors in the broth, which was salty and tangy, with a strong umami element. It was well balanced, so that no flavor overwhelmed the others, instead working together in harmony. The noodles were thin and chewy, just the right texture, while the egg was soft with that wonderful gooey yolk. There were plenty of pieces of tender pork and the entirety of the dish was satisfying on several levels. Damn tasty ramen and highly recommended. 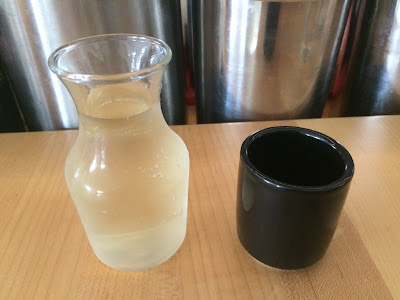 For drinks, you can get Wine, Beer, Cider or Sake. Their wine list has plenty of interesting choices which should appeal to wine lovers. A number of their beers are local to New England though there are some unique brews from elsewhere too. They have seven Sakes available by the glass or bottle. With our lunch, we enjoyed some Blue Current Junmai Ginjo Sake, which is available by the glass ($8) or 375ml bottle ($30). I will be posting a full article about this brewery next week, but I will say that it made an excellent accompaniment to the food. It is the type of Sake which I can sit and drink all afternoon. 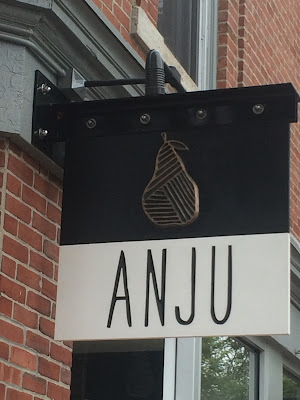 I was thoroughly impressed with the cuisine at Anju, feeling it is a good value for the quality and quantity of food you receive. The dishes are well composed, with balanced and complex flavors. They have a very good drinks program and it is a fun atmosphere. I definitely will return here to try more items on the menu and it earns my highest recommendation. Check out the Kittery Foreside neighborhood and sample the bounty that can be found.
Posted by Richard Auffrey at 2:00 AM

Anyone else wants a FREE BURGER KING GIFTCARD?

Very informative, good job guys and thanks for sharing such a awesome blog. Quality Meat Products Wholesaler in Pennsylvania