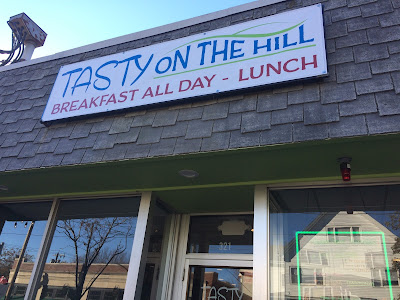 The Croque Monsieur is a delicious French sandwich with ham and cheese, and the Portuguese found a way to create a similar sandwich, except one on steroids, ramping up the meat content. The Croque Monsieur is commonly topped with bechamel sauce while the Portuguese opted for a tangier, tomato-based sauce. This tasty Portuguese monstrosity is known as the the Francesinha and is now available locally, at a small, new restaurant in Medford.

Antonio Pereira, a native of Portugal, recently opened Tasty on the Hill at 321 Boston Avenue, Medford, across the street from the Danish Pastry House. The restaurant is currently open only for breakfast and lunch, with breakfast served all day. The menu has plenty of traditional American breakfast items, from eggs to pancakes, waffles to omelets, all reasonably priced. The lunch items include burgers, wraps, and other classic sandwiches. However, their most unique menu item is the Francesinha though in the near future, they will be opening for dinner, on certain nights, offering a number of traditional Portuguese dishes. 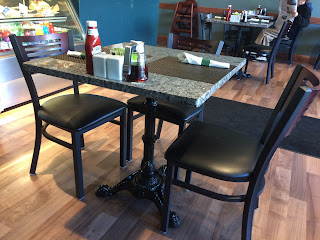 The restaurant seats around 24 people and it is very clean and spacious. It has the ambiance of a diner, and the staff is very welcoming and friendly. I've only been to the restaurant once so this is only an initial impression, but one which was so positive it was worthy of making my readers aware of this new restaurant with its compelling Portuguese sandwich. 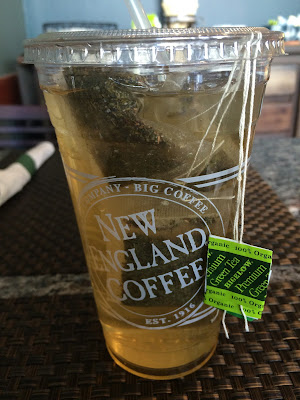 I ordered Green Iced Tea, which I was pleased to see was freshly brewed with Organic Bigelow Tea. A good start to my lunch. 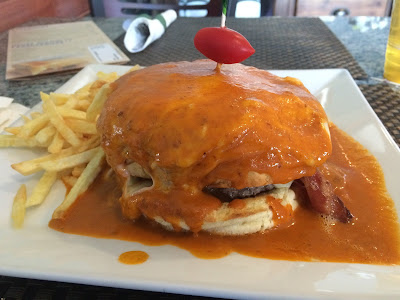 Yes, that is one big-ass sandwich!

The restaurant serves six variations (each $13.95) of the Francesinhas, including the Traditional, Grilled Chicken, Tasty Burger, Vegetarian, Bacalhau, and Smoked Salmon. All of the Francesinhas come with French fries. In the photo above,you can see the Tasty Burger, with a burger, American cheese, ham, linguica, bacon, and a fried egg, topped by a special sauce and accompanied with shoe-string French fries.

The term "francesinhas" is said to translate as "little Frenchie," "little French one," or "little French girl." The sandwich, which is most common in the city of Porto in Portugal, has murky origins though one theory seems to be dominant. The most common story is that the Francesinha was invented in the 1950s by Daniel David da Silva, a Portuguese man who was born in the municipality of Terras do Bouro. Seeking work, he traveled to Belgium and France, eventually becoming a barman. When he eventually returned to Portugal, he started working at A Regaleira restaurant.

He was considered to be an inventive cook and one of his experiments was a sandwich which was an adaption of the Croque Monsieur. Daniel David added more layers of meat and topped the sandwich with a spicy sauce, allegedly made with tomato sauce and beer. Why did he call it a Francesinha? The reasons is again uncertain, some saying he did it to reflect the robust,spicy women of France as opposed to the more sulky Portuguese women.

In Porto, you'll find many variations of the Francesinhas, though it commonly is a stack of different meats, topped by an egg, between two pieces of bread with melted cheese atop it and covered by a spicy tomato-based sauce. The recipe for the sauce is usually a big secret, though beer and sometimes even Port, is used in the making. At Tasty On the Hill, their sauce recipe is a secret, though it is supposed to contain 12 ingredients and has been a family recipe that originated about 30-40 years ago. Through some online searching, it seems that the Francesinha is not easily found in the U.S. so Tasty On The Hill is a pioneer in introducing this sandwich to Americans.

So let me describe the Francesinha I ate for lunch, the first of these sandwiches I have ever eaten so I can't compare it to those made in Porto.

It is a hearty sandwich so you need to bring your hunger if you hope to finish it. It also is very much a fork and knife sandwich, or be prepared for a very messy sandwich in your hands. The sauce was tangy, savory and slightly spicy with a strong tomato flavor. Very tasty, it was a fine topping for the thick sandwich. All the different meats provided different textures and spices, and they blended harmoniously together, enhanced by the fried egg and all the melted cheese. The bread seemed to be a large, soft roll and it stood up well to the sauce. It was a carnivore's delight, a hearty meal which should satisfy. And the French fries were a good addition, and I liked their taste with the sauce.

Overall, it was an impressive sandwich, a delightful blend of flavors and textures. I'm looking forward to returning to try some of the other variations of the Francesinha, such as maybe the Bacalhau, the salted cod. I recommend that my readers check out Tasty On The Hill, especially for the unique Francesinhas.
Posted by Richard Auffrey at 3:00 AM

I dunno... taking the Francesinha out of Porto has the potential to be like taking the Cheesesteak out of Philly... :)

At least it is being made by someone from Portugal. :)

Agree with Mr. Joe Roberts. Curious to check the place out!!! Being that i actually live in Porto. My expectations are quite high in relation to non American traditional northern portuguese food. Quality produce is a must!

The blog which made me feel food cravings. thanks for sharing.
compare parking price gatwick

waoo yummy, i love to eat this.
meet and greet at Gatwick

Made my appetite to max, can't wait to order it