Franciacorta: Serious Bubbly You Should Be Drinking 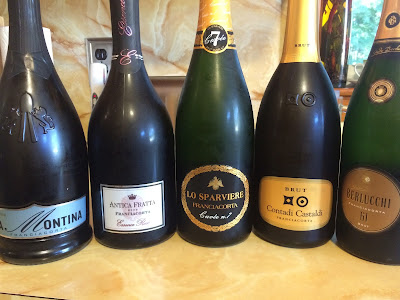 Will the Fans of Franciacorta please step forward and testify!

I recently posted about Choosing Holiday Wines, recommending that you don't buy the same old wines and seek out something different and delicious, such as Franciacorta. In short, Franciacorta is Italian Sparkling Wine, made in the méthode traditionnelle, and produced in the Franciacorta region of Lombardy. For more details and basic information on Franciacorta, please consult my prior post Franciacorta: Bubbly That Needs To Be On Your Wine Radar.  As a brief update, in 2014, annual production of Franciacorta was about 15.5 million bottles, roughly a 10% increase since 2012.

Unfortunately, only a small percentage of Franciacorta is exported to the U.S. so it is easy for it to get lost in the deluge of other Sparkling Wines that are available. However, it is worth seeking out as it presents delicious & quality wine, reasonably priced, and less expensive than most Champagne. You can check out some of my prior Franciacorta reviews in Fun With Franciacorta  and see that the 2007 Villa Franciacorta Brut made my list of 2013 Top Ten Wines Over $15 (But Under $50).

In the last several months, I've participated in two Franciacorta Twitter media tastings, sampling nine more Franciacorta wines. In general, all of these wines were delicious and intriguing in their own ways. They commonly are dry and crisp, some with a tasty creaminess, and usually have bright,lively flavors and tiny, fine bubbles. Franciacorta is very food friendly, with everything from Sushi to Potato Chips, Swordfish to Caviar (all which I have eaten with these wines). As most are priced in the range of $25-$35, they are less expensive than most Champagne, and I believe they deliver plenty of quality at their price point. During this holiday season, Franciacorta can easily fill all your Sparkling Wine needs.

Let me provide you some Franciacorta options you can consider this season. 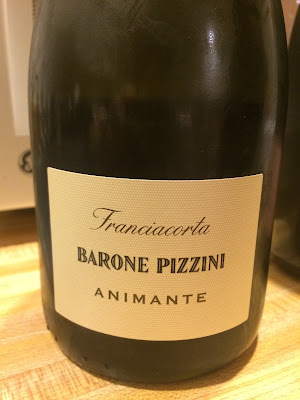 The NV Barone Pizzini Animante Franciacorta Brut ($35) is a blend of 70% Chardonnay, 18% Pinot Noir, & 4% Pinot Bianco. Though the winery was founded in 1967, wine making in their family extends back centuries.It was the first winery in Franciacorta to adopt organic viticulture and in 2001, all their Franciacorta vineyards attained the organic certification.  The vineyards cover a total surface area of 47 hectares and in 2006, they constructed an eco-friendly winery and have been working at making another of their vineyards Biodynamic.

The Animante is aged for about six months in stainless steel, spends 20-30 months in the bottle on the lees, and has an alcohol content of 12%. With a fine golden color, the nose presents appealing floral and citrus notes. On the palate, it is dry and crisp, with delicious tastes of green apple, white flowers, mild honey notes and a touch of toastiness. On the long finish, there is some delightful creaminess. This is complex and serious bubbly, sure to impress, and would be perfect for seafood.  Highly recommended. 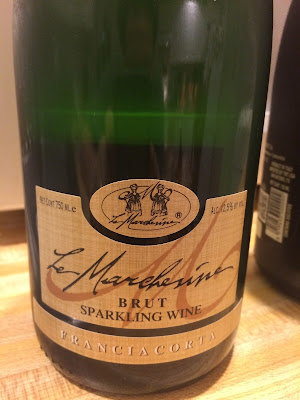 The NV Le Marchesine Franciacorta Brut ($27) is also a blend of Chardonnay, Pinot Noir, and Pinot Bianco. The Biatta family founded this winery in 1985, though the family's connection to wine extends back to 1196 when an ancient ancestor was a négociant éleveur. The family now owns about 47 hectares, producing approximately 450K bottles annually.

This Brut spends about 24 months in the bottle on the lees and has an alcohol content of 12.5%, This wine also shows floral notes on the aroma as well as some spices, notably ginger. On the palate, it is also crisp and dry, fresh and tasty, with more herbal and spices flavors, especially ginger. The ginger is dominant but far from overwhelming. It is not as complex as the Animante but is easy drinking bubbly which should please your palate. As a food wine, it is excellent to help cleanse your palate, especially with those ginger notes. 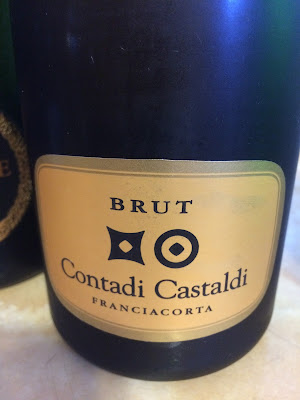 The NV Contadi Castaldi Franciacorta Brut ($25) is a blend of 90% Chardonnay, 10% Pinot Noir and 10% Pinot Bianco. During the 1980s, the Moretti family converted a brickyard into a winery. This Brut spent about 7 months aging, partially in stainless steel and partially in barriques, and then 18-30 months in the bottle on the lees. It has an alcohol content of 12.5%,  This is a Franciacorta that is mostly about the fruit, as well as being clean, crisp and dry. There are delightful flavors of apple and pear, and it drinks so easily. Yet it is more than a one-note wine, containing plenty of character for this price point. 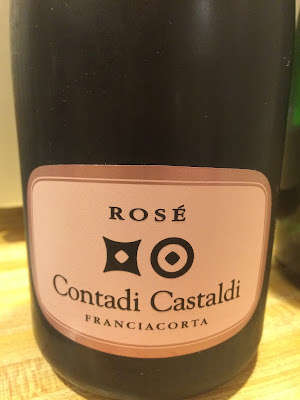 The NV Contadi Castaldi Franciacorta Rosé ($25) is a blend of 65% Chardonnay and 35% Pinot Noir. This Rosé spent about 7 months aging, partially in stainless steel and partially in barriques, and then 24-30 months in the bottle on the lees. In this wine, fruit plays a dominant role as well, plenty of delicious red berry with hints of apple and even pineapple. It is dry and crisp, with some subtle mineral notes and a hint of rose petals. It is a fun wine, eager to please, but with its serious side too. An excellent value at this price point. 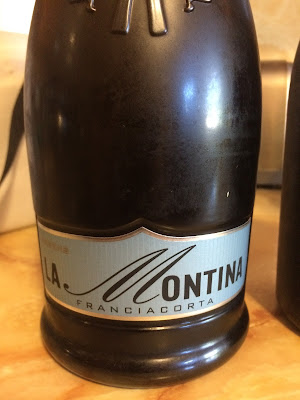 The La Montina Argens Saten ($28) is made from 100% Chardonnay. The winery owns about 72 hectares and the grapes for this wine come from their best vineyards. This wine spent at least 24 months in the bottle on the lees. I was reminded of herbed rolls when I tasted this Saten, as the wine had plenty of herbal and toast notes. It was a more savory and rich taste, both dry and crisp. A very different style than some of the more fruity Franciacorta and would be a nice pairing for dishes like roast chicken and even lamb. 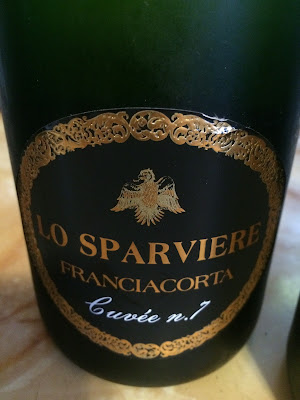 Franciacorta and firearms? Yes, the NV Lo Sparvierre Brut Cuvee No.7 ($35), is from a winery that is owned by a famous firearms manufacturing company, Fabbrica d'Armi Pietro Beretta. The Beretta company was established back in 1526 and is currently owned and operated by Ugo Gussalli Beretta and his sons, Franco and Pietro. The Lo Sparvierre estate consists of about 150 hectares, 30 which are vineyards. The term "Sparvierre" means "sparrowhawk" and is on the coat of arms which was in the original 16th-century building on the estate.

This Brut is made from 100% Chardonnay, aged in the bottle for about 30 months on the lees, and has an alcohol content of 13%. This was an impressive wine, with an alluring nose of honey, brioche and pear. On the palate, it is crisp, dry and complex, with an intriguing melange of flavors, including honey and ripe pear, hints of peach and toasty notes, a mild nuttiness and some mineral elements. With a lengthy and pleasing finish, this was bubbly to slowly savor and enjoy. It would also enhance many types of dishes. Highly recommended 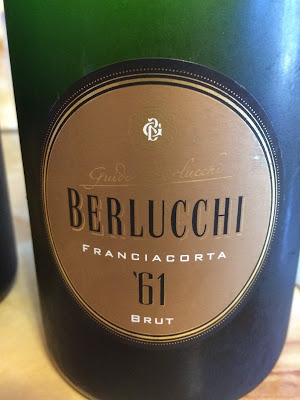 The NV Guide Berlucchi '61 Brut ($30) is a blend of 90% Chardonnay and 10% Pinot Noir. It is produced by the winery which brought sparkling wine to Franciacorta. Guido Berlucchi hired Franco Ziliani, a young enologist, to assist with his winery. Franco was full of enthusiasm and ideas, and desired to produce a sparkling wine. Guido allowed him to do so, and in 1961, they produced their first bubbly, Pinot di Franciacorta, which was also the first time that the term "Franciacorta" appeared on a wine label.

This Brut spends about 18 months in the bottle on the lees and sees no malolactic fermentation. This is such an elegant wine, smooth, complex and alluring. Delicious and clean flavors of green apple, melon and citrus with a rich mouth feel. It is an impressive wine, one which could be enjoyed on its own or paired with food. This wine tastes better than many Champagnes priced at $50-$60. Highly recommended. 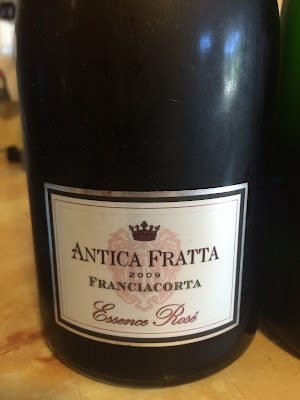 The 2009 Antica Fratta Essence Rosé ($35) a blend of Chardonnay and Pinot Noir. The original winery had an excellent reputation in the mid-1800s but was eventually abandoned until it was purchased in 1979, giving birth to Antica Fratta. This Brut spends about 36 months in the bottle on the lees and has an alcohol content of 13%. This is an elegant Rosé, dry and crisp, with a taste of creamy red berries with a hint of herbal accents. Savory and delicious, this is an appealing wine that should please anyone. It is food friendly but also would be excellent on its own. 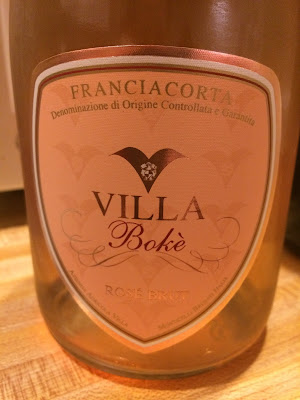 The 2010 Villa Franciacorta Boké Rosé ($25) is a blend of 50% Chardonnay and 50% Pinot Noir. In 1960, Alessandro Bianchi purchased the hamlet of Villa, whose buildings date to the 16th century, and a hundred hectares of land surrounding it. Wine had been made in Villa for centuries, and Bianchi continued that tradition. They produce only about 300K bottles annually and only make vintage Franciacorta using only estate grapes.

This Rosé spends at least 36 months in the bottle on the lees. The 2010 vintage was a bit rainy during the growing season but the harvest took place under ideal conditions. I was impressed with this wine too, loving its bright and fruity nose. It was crisp and dry, elegant and complex, with plenty of red fruit flavors, enhanced with some mineral notes. It has a lengthy, satisfying finish and it plain delicious, one of those wines that you finish and immediately ask for another glass (or bottle). Highly recommended.

So why aren't you drinking Franciacortia?
Posted by Richard Auffrey at 9:07 AM