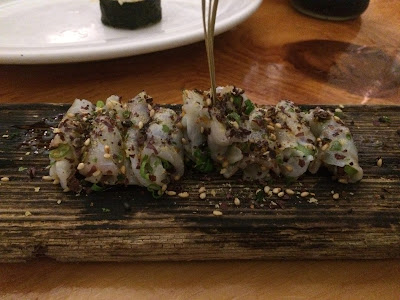 A look back in time. In the Spring of 2014, after taking a ferry to New London, Connecticut, I took a detour for dinner before heading home. I had a reservation in New Haven, at Miya's Sushi, and that evening I had a superb dinner, which I detailed in Miya's Sushi & Chef Bun Lai: Like A Haiku.

Miya's Sushi ended up with several entries in my 2014 Year-End Favorite lists. It earned my Favorite Unusual Food of 2014, for the insect dishes I enjoyed, from Cricket Maki to Crispy Black Soldier Fly Larvae. It also earned my Favorite New Seafood for their Cannonball Jellyfish. In addition, it had my Favorite Infused Sake, several intriguing infused Sakes such as the Chinese Firecracker Sake. Most importantly, it was my Top Restaurant Experience of 2014.

About three weeks ago, I returned to Miya's Sushi with my good friends Adam Japko and Andrew Witter, neither who had been to the restaurant before. This was my first visit since my initial visit to New Haven. I knew the restaurant had recently changed their menu and I was very curious to see whether my experience would be equally as good as my first visit. Would it meet my highest expectations?

Since my first visit, Chef Bun Lai has continued to garner great praise from the media, gaining even more national attention. He now has a book deal, is working on a television show and is planning to open a second restaurant in Miami, Florida. In my prior review, I noted Chef Lai's humility, and despite his growing fame, he still seems very grounded and humble. Though he could easily transform Miya's Sushi into a more prestigious and expensive restaurant, he refuses to do so, wanting his original restaurant to remain casual and affordable, to ensure the people that live in the neighborhood can still afford to dine there. In addition, the restaurant continues to be true to his philosophy, offering sustainable seafood as well as healthy and nutritious dishes.

On this visit, I took few pictures and few notes, wanting to simply enjoy the evening, to savor the cuisine, and to spend quality time with my friends. Overall, it was another excellent experience at Miya's and both Adam and Andrew thoroughly enjoyed the dinner. It's casual and funky ambiance remains the same, the cuisine was as delicious as before, and plenty of the menu is very affordable. Miya's Sushi continues to earn my highest recommendation.

My only minor quibble is that the new menu has eliminated most of their infused Sakes, possibly as they didn't sell too well. However, they retained my favorite, the Chinese Firecracker Sake, which I previously stated was "a blend of home grown hot chili peppers, lemons, limes, citron, lemongrass, and honey. It was a complex and intriguing blend of citrus and underlying heat. The mild sweetness helped to balance the spiciness, and the citrus provided some nice acidity." They had a few other Sakes too, and we enjoyed a bottle of Kikusui Organic Junmai Ginjo.

As for food, we initially began with the Subtidal Salad ($11), a heaping mound of sesame-seasoned wild local seaweed and organic greens from their partner farms. This tasty salad is large enough for at least two people, or one person could make a meal out of it. It was fresh and tasty, with a hint of brininess. The Pumpkin Miso Soup ($4) is made from slow roasted pumpkins, sweet potatoes, acorn squash, and organic soy bean miso enriched with locally foraged, invasive, codium fragile seaweed. Savory with a mild sweetness, this is a rich and tasty soup which is perfect for the winter.

I'm usually not a fan of fake meat but Chef Lai has created a compelling dish that even the most ardent carnivore would enjoy. The Karma Virtue Chickenots ($8) uses his mother's fried chicken recipe, but without any chicken. Instead, the "chicken" is composed of soybeans, amaranth, and peas, with a side of curry sauce. If you didn't know it, you would likely think you were eating actual chicken, and the chicken "nuggets" were crisp and flavorful, with nice spicy accents. You must try these if you visit Miya's Sushi.

The restaurant continues to produce some very inventive Sushi dishes, using sustainable seafood, invasive species, insects, and vegetarian options. Though a few options are pricier, the majority are affordable choices for most any budget. And the pricier options are worth it as they are basically generous portions of fresh seafood, easily able to be shared. So, if the cost of those dishes are shared between a few people, they become affordable as well.

The Kiribati Sashimi ($20), which is pictured at the top of this post, is Lionfish sashimi (an invasive species) with mineral-rich Kiribati sea salt, and a dozen mouth-numbing spices. The silky fish is complemented by the salt and spices and there are plenty of slices of the lionfish. Another invasive species dish is the Nine-Spice Asian Carp ($18), which is thinly sliced carp with a spicy citrus tamari sauce, green onions and roasted black soldier fly larvae. The carp is also silky in your mouth, enhanced by the citrus flavors and the crunchy fly larvae.

In a simpler vein, there was the Tuna Roll ($6), five pieces of pole-caught Washington state albacore and the Baked Sweet Potato Roll ($4), also with five pieces. Usually, you find Fried Sweet Potato at most Sushi spots, but Chef Lai wants to make the dish healthier, staying away from frying. The Bad-Tempered Geisha Boy ($5), for 5 pieces, has plump spicy mussels and avocado while the Tres Sushi Mariachis ($8) for 5 pieces, is made of wild salmon, capers, burdock root, avocado, and organic olive oil. Finally, the Wabisabi ($10), for five pieces, is made of kimchee-seared wild Alaskan coho salmon wrapped in pickled grape leaves. Miya's Maki rolls provide plenty of fresh taste in each small bite. There are plenty of other choices too and you won't go wrong with whatever you order.

Maybe you have a hankering for noodles instead and Miya's also has you covered. Their Udon Noodles ($6) are plump Japanese wheat noodles in a light & savory broth made from wild-foraged Maine kelp. The broth was amazing, savory and rich in flavor, and the thick noodles were just the right texture, and made for slurping. At $6, this is a hearty dish for those on a budget as well as anyone who wants a delicious bowl of udon. Their Miso Ramen ($6), with freshly made ramen noodles in a rich and spicy sesame miso broth is another hearty and affordable dish. The broth is a bit lighter than the udon broth but just as flavorful. And the thinner ramen noodles are also quite good. Either dish would warm your belly and heart this winter.

Though everyone was fairly full, I convinced them to go for dessert, because it would only be a single bite! The Seven Deadly Sushi ($5) is basically a single piece maki roll, made from fermented sundried banana, cashew butter, strawberries, cacao nibs, and homemade hand-pounded mochi, topped with a tiny scoop of coconut olive oil ice cream. It is also recommended that you dip it into a little bit of soy sauce. What a way to end your meal, a single bite that bursts with so much flavor, and the salty soy sauce is a nice balance to the sweetness of the roll. It is a complex bite and you can clearly differentiate so many of the different flavors. No matter how full you think you are, you should have room for one more bite of such a killer dessert.

Miya's Sushi remains one of my Favorite restaurants and if you are anywhere near New Haven, you must dine there. You can feel good about the food, which is both sustainable and nutritious. You won't be disappointed with all the tastes and flavors within each compelling dish. It remains a very affordable restaurant and will continue to be so. Chef Bun Lai deserves every accolade and rave he has received and I look forward to when his book and TV show are released.

Kanpai to Chef Bun Lai!
Posted by Richard Auffrey at 3:00 AM