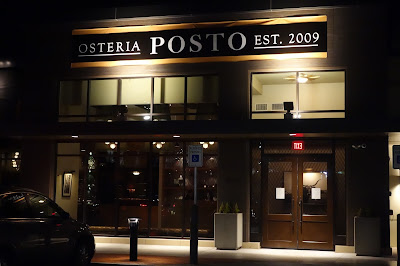 For the last couple years, I've talked about how Burlington has become an interesting suburban culinary destination. Waltham is on a similar path, with a number of new restaurants and food markets as well as other restaurateurs seeking to open their own establishments. This is great news for suburban diners seeking quality restaurants who don't want to drive into Boston or Cambridge. One of the newest restaurants in Waltham, which has only been open for two weeks, is Osteria Posto.

Chef/Owner Joe Cassinelli of the Alpine Restaurant Group (which includes the Painted Burro, Rosebud American Kitchen, Posto, and Posto Mobile), has added Osteria Posto, a high-end Italian steakhouse  to the group. As a fan of the Painted Burro and Posto, I was excited that he was opening a suburban restaurant a relatively short distance from my home. Osteria Posto had a soft opening last week and I was invited as a media guest to check it out this week. Because they have only been open for two weeks, I'm providing my initial impressions and not a complete review. Once more time has passed, and I've dined there multiple times, then I'll provide a more detailed and official review. I will say that my initial visit was impressive and that the restaurant seems to be running very well.

Osteria Posto "features fresh and vibrant seasonal menus with locally sourced ingredients, homemade pasta, and high quality meats."  Sustainability is important to them and the restaurant is LEED certified and has a raised bed garden, designed by Green City Growers, which they hope will provide fresh produce in the Spring. The Executive Chef is Robert Fathman, who has thirty years of culinary experience and has worked at some New England restaurants including Grill 23 & Bar, The Federal, The Red Lion Inn, and Legal Harborside. 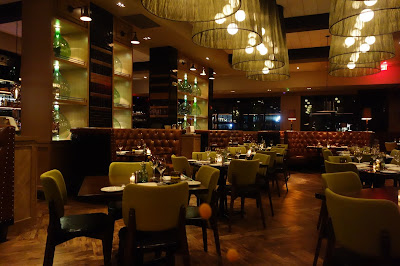 The restaurant has an elegant look without being ostentatious, with comfortable leather banquettes and it seats about 300 people. As you enter the restaurant, you'll see the long, 22 seat bar to your left. The main dining room also has a visible wine cellar. In addition, there is a three-season patio for dining (which is closed during the winter) as well as some private dining rooms. 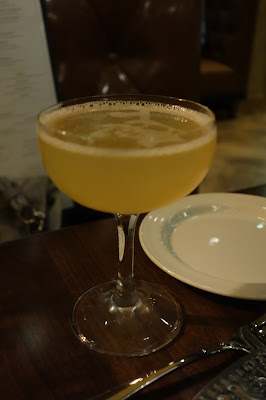 Osteria Posto has a full bar program, with a list of intriguing cocktails, most priced $11-$12. A couple of their specialties include the Barrel Aged Negroni ($13) and the Negroni for 2 Tableside ($20). In the photo above is the Autumn Spritz, made of Chopin Vodka, Lemon, Spiced Cider Reduction, & Prosecco. It was tasty, with a strong apple and cinnamon taste and it was only slightly sweet. 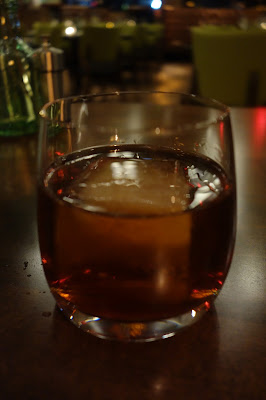 This is the Golden Age, made from Rittenhouse Rye, Cynar, Orange Bitters, and with Smoked Ice, a kind of variation on the Manhattan. It had a strong bitter and spicy taste with a hint of orange. Well balanced and delicious, this is an excellent winter cocktail.

Over the course of the evening, we also enjoyed several wines by the glass, including the NV Adami Garbel Prosecco (not too sweet, nice citrus flavors), 2014 Otella Le Creete Trebbiano (crisp, dry, tasty apple & citrus flavors), a Barbera (didn't get the name but it was the only one of the glass list--fruity and light), and the 2011 Barolo Damilano “Le Cinque Vigne” (a bolder wine, perfect for steak). 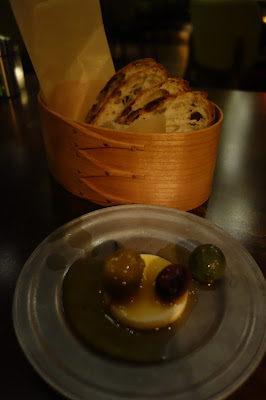 Your meal starts with some rustic bread accompanied by butter, olive oil, & olives.

The steaks are served a la carte and you won't find the traditional steakhouse sides here. There isn't potato au gratin, mac n' cheese, creamed spinach, or similar such dishes. Instead, you'll find items like fingerling potatoes, mushrooms, chicories and cauliflower. The restaurant appears to be opting for more healthy and seasonal options. 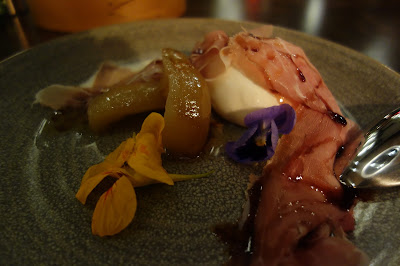 We began our dinner with some Appetizers, and it was difficult to decide what to order as so many dishes intrigued me. The Burrata ($16), with prosciutto, poached pear and vincotto, was an excellent combination of flavors and textures, from the creamy burrata to the salty prosciutto, from the acidity of the pears to the savory and slightly sweet vincotto. 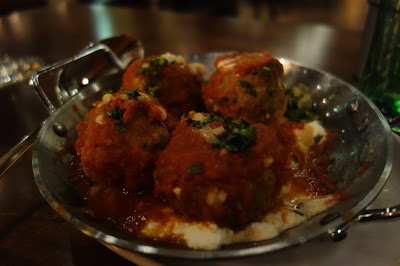 The Lamb Meatballs ($13) are topped by smoked tomato sugo and goat cheese. The large and firm meatballs were meaty with a savory bite enhanced by the slightly spicy sauce and the creamy, melted goat cheese. 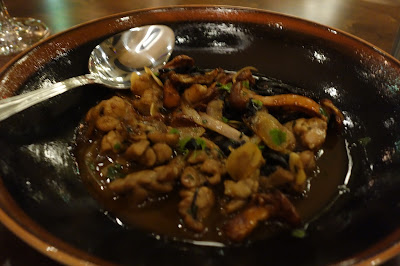 The Sweetbread Marsala ($12), with wild mushrooms & toasted garlic, was an umami delight. The tender and crisp sweetbreads were enhanced by the sweet, but restrained, marsala sauce and the mushrooms added more earthy and umami flavors. 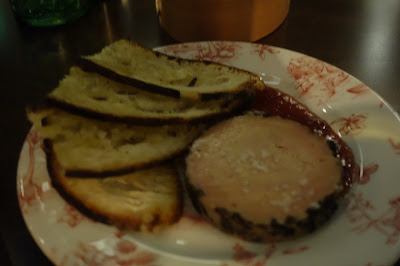 We also tried one of the Charcuterie dishes, the Salt Cured Foie Gras ($14), with juniper, chartreuse, and toasted slices of bread. The hearty slice of creamy foie, enhanced by the salt and fruit, was delicious and decadent.

In addition, we got to sample an Oyster, with yuzu granita, olive oil, & black pepper. It is basically an oyster slushy, and I enjoyed the citrus taste of the yuzu atop the briny oyster. We also tasted some of the Trippa (aka Tripe), with a spicy romana sauce & pecorino. I'm not usually a tripe guy but I loved the Trippa at Posto, and the Trippa here is obviously similar and just as tasty. Tender and flavorful, this dish would convert any Tripe hater. 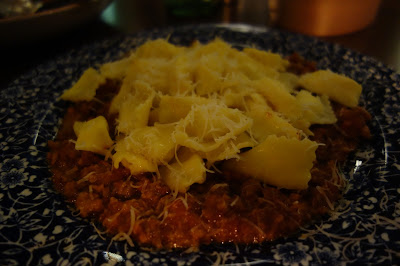 Posto also makes some amazing pasta dishes and I expected Osteria Posto would maintain that same quality. We enjoyed a dish of the Agnolotti Dal Plin ($24), filled with parmesan polenta and sitting atop a spicy goat bolognese. The pillowy pasta, with a creamy filling, was absolutely delicious and the spicy, meaty sauce was hearty and tasty. You never would have known that it was goat. 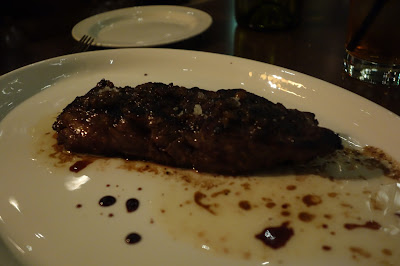 As for entrees, the Chef recommended the 8oz Cap Steak ($30) which is topped by bone marrow-fat broth with vincotto. This is a cut you don't often see at many steakhouses, though it tends to be tender and flavorful. And this steak didn't disappoint, as the knife easily slid through the tender meat and it was quite tasty, enhanced by the bone marrow. The Chef made an excellent call on recommending this steak and I would give it a hearty recommendation as well. 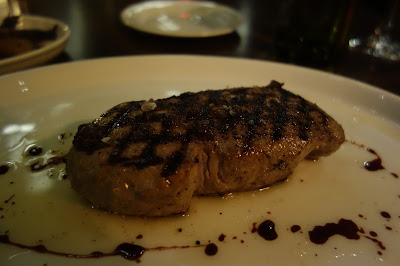 The 10oz Rib Eye Tenderloin ($39), which I had prepared rare, was also tender and delicious. A fine cut of meat, there was no excess fat and it had a nice char on the exterior. 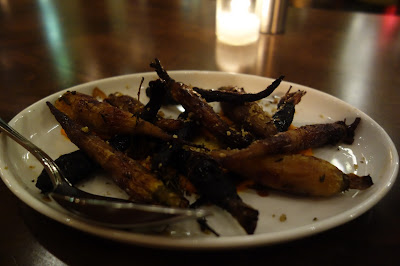 The Carrots ($11) are slow roasted heirloom carrots with a Chianti-carrot pasata. The flavorful carrots had a nice char and a little sweetness, an elevation above the usual generic carrots you find at some places. 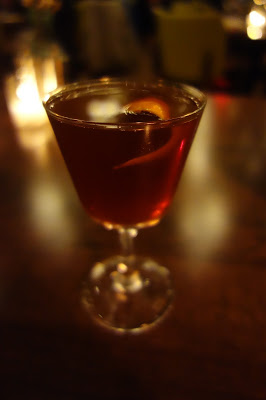 When you receive the Dessert menu, it includes numerous after-dinner drinks as well. You'll find a nice list of Whiskey, from Bourbons to Scotch, some Dessert Wines, Port, Barolo Chinato, Grappa, and Amaro. In addition, you could opt for the cocktail pictured above, the 1851 ($11), which is made from English breakfast infused Rye, Ramazotti, honey, & whiskey barrel bitters. It was fruity, with citrus flavors, a mild spiciness and a strong tea flavor on the finish. The alcohol was more subdued and I very much enjoyed its combination of flavors.

As for Desserts, you have 7 choices, priced from $7-$11, as well as 6 different Italian cheeses. 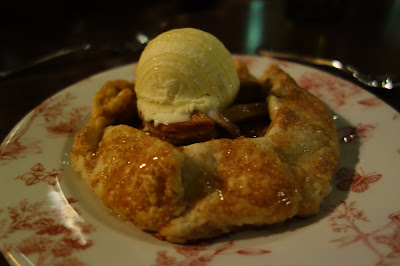 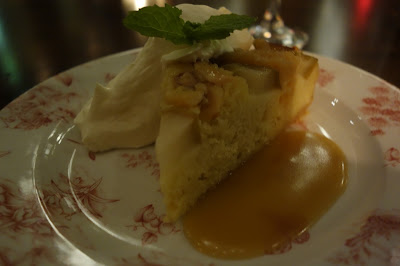 The Pear & Almond Sottosopra consists of a toasted almond & pear upside down cake with a side of creme fraiche. The moist cake was delicious, with nice pieces of pear, though note that the creme fraiche is very sour, which might not be for everyone. 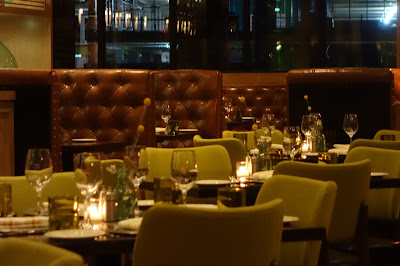 Overall, Osteria Posto is already doing an excellent job despite only having been open for two weeks. Service was top notch, and our server was knowledgeable, personable and efficient. The rest of the serving staff help each other, working as a well-oiled machine, Watching the servers at other tables, they all seemed to work hard and well. The food was delicious, well-balanced, and amply portioned. The drinks program is also very good, with some very fine cocktails. I eagerly look forward to dining here again and at this time, it earns my hearty recommendation. Osteria Posto is going to become one of the top culinary destinations in the suburbs.
Posted by Richard Auffrey at 9:10 AM

The Italian style food is unique. I had an excellent seafood stew that was a bit spicy. The fish was extremely fresh and flavorful.

Incredible looking restaurant with an incredible chef behind the scenes. I can only imagine the success in the taste of foods here with having a chef who has cooked for some really amazing restaurants such as: Grill 23 & Bar, The Federal, The Red Lion Inn, and Legal Harborside. This restaurant's scene is fantastic and inviting, which makes this a definite walk-in for a special date!