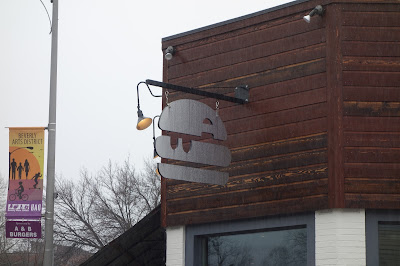 A&B Burgers in Beverly makes a killer burger but the restaurant is about far more than just burgers. Check out my prior review for more information about the restaurant, its burgers, and some of its other offerings from Chicken & Waffles to Churros.

Recently, A&B Burgers instituted a monthly Dinner Series, where Chef Kwasi Kwaa and his team showcase a different type of cuisine. Prior events have included Ghanaian Street Food and a Trip Through Asia. Most recently, the Dinner Series made a trip south, to Louisiana, presenting a four-course Cajun Dinner, and I attended the event as a media guest. To ensure freshness, the restaurant flew up the alligator and crawfish the day before the event.

The dinner was held at communal tables, making it very much a fun and social event. In addition to the food, you could also opt for beverage pairings, four Louisiana cocktails that were chosen to pair with the various courses. Or you could just choose whatever else you might like to drink. I went for the cocktail pairings, to get the full experience and because the cocktails sounded intriguing. In addition, I was curious as to how well the pairings would work.

Overall, the dinner was a success, with plenty of tasty food and cocktails. Chef Kwaa showcased his ample culinary skills and I think he did Louisiana proud. The other diners around me were impressed with the dinner as well, including a couple who had never been to A&B Burgers before but now planned to return soon to try the rest of the menu. 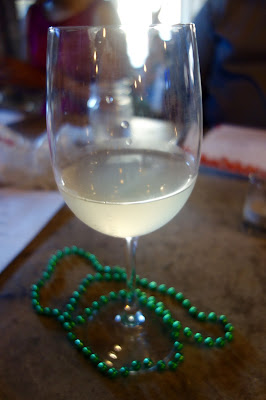 The cocktail pairings were created by Kim Sapp, one of their managers, and she is "a Texas girl so she loves her southern cocktails!" Our first cocktail was the French 75, which was made with American Brut Sparkling Wine, Bombay Gin, fresh lemon juice, and simple syrup. It was refreshing, with a nice lemony taste, mild effervescence, and some herbal notes. It was intended to pair with our Welcome Dish and First Course. 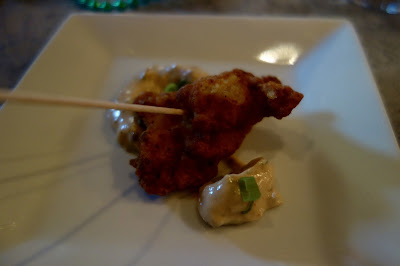 The Welcome Dish was a Gator Lollipop, a piece of fried alligator with a Louisiana remoulade. Gator is a mild meat, which is reminiscent in some ways to chicken, but it had a denser and almost flaky texture, though it wasn't overly chewy. The fried batter was clean and crunchy, and I could have easily devoured a bowl of these gator bites while watching the Patriots play. The idea of eating gator may not appeal to some people, but they would actually enjoy the taste if they only gave it a try. It also went well with the French 75, and I think other fried dishes would go with that cocktail too. 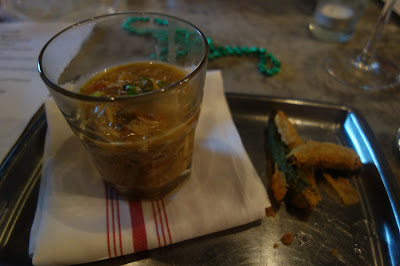 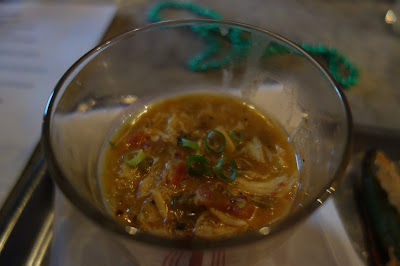 The First Course was Crab Étouffée with a side of fried okra. There was plenty of pieces of sweet crab meat in this dish, and it presented a very savory taste, with a mild spiciness, and bits of rice at the bottom of the dish. Though I'm not usually an okra fan, as it can be slimy, this fried okra was actually good, presenting more of a nice crunch without any slimy off-taste. The acidic edge of the French 75 helped to cut through some of the thickness of the Étouffée. 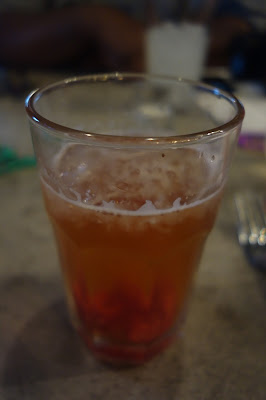 The next cocktail was a Roffignac, which was made with Courvoisier VS Cognac, Strawberry Cardamom Shrub, and Soda. This is a cocktail that was new to me, though it is a classic New Orleans cocktail, but seems to have received far less attention that many other cocktails from that city. It was mildly sweet with a little tartness, plenty of red fruit flavor and mild bubbles. This would be an excellent and refreshing summer cocktail and is worthy of much more attention in the local cocktail scene. 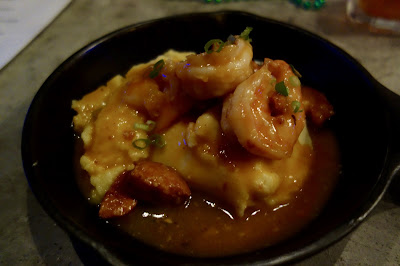 The Second Course was Shrimp & Grits, with creamy grits, Cajun shrimp, and Andouille sausage. This dish could have been served hotter, though it was delicious. The grits were more solid, almost like creamy corn-flavored mashed potatoes, and the shrimp were plump and spicy, enhanced by the spicy Andouille sausage. It was a hearty dish, excellent comfort food, and the Roffignac, helped to counter some of the dish's spicy heat. 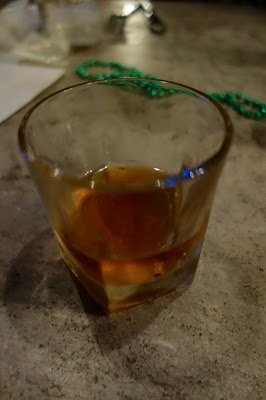 The third cocktail was the Cocktail a la Louisiane, made with Sazerac Rye, Benedictine, Noilly Prat Sweet Vermouth, St. George Absinthe, and Peychauds Bitters. This was a complex and bitter cocktail, with hints of sweetness and lots of herbal notes. 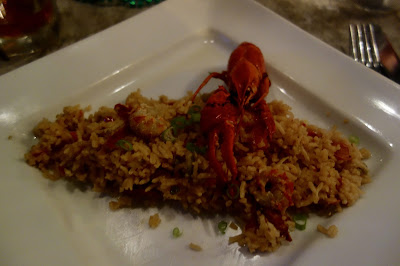 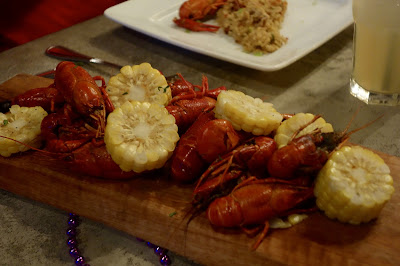 The third Course was Crawfish Jambalaya, a spicy jambalaya with fresh & large Louisiana crawfish. In the top picture, you can see the multi-clawed monstrosity climbing the mountain of spicy rice and Andouille sausage. And we were also presented with extra crawfish for the table, plenty of these delectable crustaceans of which you could tear off their head and suck out the meat. The Jambalaya was excellent with a nice blend of flavors and textures, and I was sure to clean my plate. The crawfish were also meaty and tender, with a hint of brininess. 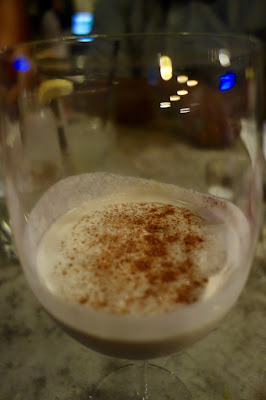 The final cocktail was Milk Punch, which is made with milk, heavy cream, brandy, brown sugar simple syrup, and fresh vanilla. It was sweet and creamy, with a touch of cinnamon and only a mild hint of alcohol. It makes for a nice after-dinner drink and lacks that artificial taste you find in some commercial cream cocktails. 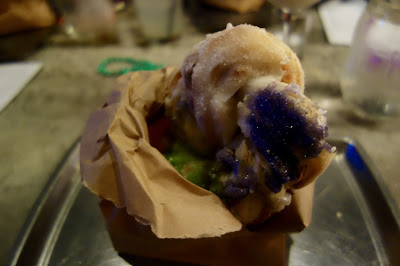 For dessert, there was a freshly baked King Cake with a brown sugar glaze, and this was fantastic, with a soft, warm cake and plenty of sweetness (yet without being overly sweet). It reminded me in some ways of monkey bread, tearing apart very easily. We received a hefty piece of cake, though I craved even more once I finished mine. It was the type of dessert which almost makes you forget the rest of the meal. If you ever see it on their menu again, order it! 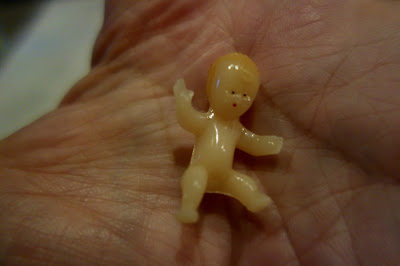 King Cakes are very popular in New Orleans during Mardi Gras and there is a tradition of hiding a small, plastic baby in the cake 9which originally symbolized the baby Jesus). Whoever finds the baby in their cake is supposed to receive luck and prosperity. I was fortunate to find a baby, pictured above, in my cake so I hope Ill be lucky in the coming year.

A&B Burgers os continuing their Dinner Series later this month, on Tuesday. September 27, showcasing Spanish cuisine. There might even be Sherry! I'll post details about that dinner once I learn more. In addition, A&B Burgers has recently started serving Brunch, with dishes like Pork Belly Bacon & Eggs and Southern Biscuits & Gravy. Don't pigeonhole A&B as just a burger spot as it is far more than that.
Posted by Richard Auffrey at 3:00 AM