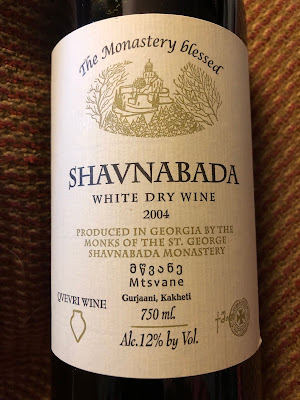 An Amber wine that has been aging in a qvevri for 11 years? Color me intrigued!

While perusing the shelves at The Wine Bottega, I found the 2004 Shavnabada Mtsvane, a Georgian wine which had been matured in a qvevri for 11 years. As a huge fan of Georgian wines, including their fascinating qvevri wines, I had to purchase this unique wine. I wanted to experience a wine of this age, to better understand the longterm effect of the qvevri maturation and extended skin contact. It intrigued me on an intellectual level but also ignited my vinous passion.

In southeastern Georgia, you'll find the Shavnabada Mountain, an extinct volcano that reaches to an altitude of over 2500 feet. The mountain's name derives from the phrase "shavi nabadi," which translates as "black cloak." This name is based on an ancient legend where St. George, wearing a black cloak, led an army of the Georgian king in an important military victory. Located atop this mountain is the Shavnabada Monastery, a medieval Georgian Orthodox monastery.

The monastery was originally constructed in the 12th century, and later rebuilt in the 17th century. Unfortunately, when Stalin took control of Georgia, the monastery was forced to close, though it would reopen once Georgia regained its independence. In 1992, the monks restored their wine cellar,  “The Monastery Blessed,” and started producing wines in 1998. Only about a dozen monks work at the monastery, and it seems that they may hire others to help them produce their wine, though under their close supervision, and their annual production is about 150,000 bottles, or about 12,500 cases. Besides wine, they also make Chacha, pomace brandy.

Their wines are produced in a traditional manner, and their main grapes, which are all hand harvested, include Rkatsiteli, Kakhuri Mtsvane and Saperavi. The grapes are crushed by foot, in a  Satsnakheli, a traditional wooden press. Both their red and white wines are fermented in qvevri, where a little sulfur dioxide is burned in the qvveri while it is still empty. The finished wines are also unfined and unfiltered.

The 2004 Shavnabada Mtsvane ($40) is made from 100% Kakhuri Mtsvane, sourced from the village of Gurjaani in Kakheti, and only has a 12% ABV. Mtsvane, which roughly translates as "young" or "green," is a very old indigenous grape, that may extend back at least to the 5th century. It is a light-skinned, white grape, which can commonly present peach, citrus and mineral notes. The grapes were foot trodden, and then macerated in qvevri for about five months, before aging in the qvevri for about 11 years. The bottleneck is then sealed with beeswax, from hives raised at the monastery.

The wine has a light mahogany color, with an intriguing nose of nuts and savory spices. On the palate, it is a complex melange of savory notes, with basically no fruit elements. This may turn off some wine lovers, who seek out fruit flavors, but I encourage you to think out of the box and embrace the savory and delicious aspect of this wine. It isn't your usual type of wine, but there is nothing wrong that that, and you should expand your palate to experience this type of wine. I was enthralled with its flavors, hints of salted nuts, smoke, as well as savory spices and herbs. In addition, the taste is very clean and elegant, different from many other amber wines you might find outside of Georgia. That clean taste presents a feeling of freshness, and you might not even believe it has been aging for 11 years. I've experienced this before in many other amber wines from Georgia.

I shared this wine with a number of wine loving friends and they nearly all loved it as well, the only outlier being someone who isn't a fan of amber wines in general. To me, this was a superb wine, and I believe it is very reasonably priced, especially considering the prices of amber wines from other countries, including wines that have seen much less aging than the Shavnabada. You don't get much more traditional than this Gerogian wine and the monks have succeeded in producing a fantastic wine, Highly recommended, and this will probably be on one of my Top Ten lists of 2019.
Posted by Richard Auffrey at 10:16 AM