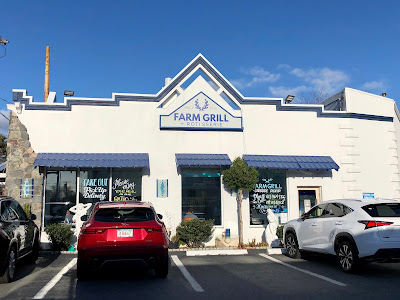 Next year, the Farm Grill & Rotisserie, a Greek restaurant in Newton, will celebrate its 25th anniversary. For those 25 years, it has been a favorite of numerous people and continues to be an asset to Newton. Savvas Iliades, the founder of the Farm Grill, immigrated from Greece in the mid-1970s, beginning his career as a roofer and steel worker. However, he eventually transitioned into the restaurant industry, which led him to opening the Farm Grill in 1996. 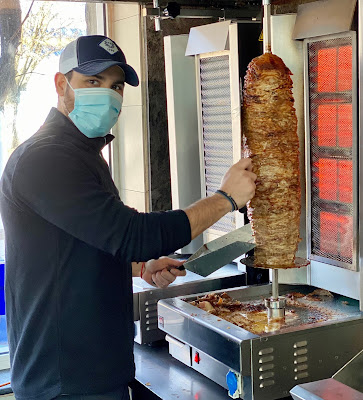 Alex Iliades (pictured above), is the son of Savvas, and now runs the restaurant. I recently met with him at the Farm Grill to chat and sample some of their culinary offerings. Alex, who attended Johnson & Wales, previously owned a donut shop and then a pizza shop for almost twenty years. This was my first visit to the restaurant, but won't be my last. It's easily accessible off Rt.95, and is located only a few minutes from the Needham location of Bin Ends. I'll also note that Katerina Iliades, the daughter of Savvas, runs the excellent Greek International Food Market, which I previously raved about, using some of the recipes from her father's restaurant.
Alex was personable and humble, and clearly passionate about Greek cuisine. Following in the footsteps of his father, he is continuing to make Farm Grill a worthy destination, keeping true to its roots. Obviously, the pandemic has hurt their business but they are handling it as best they can. Although they would usually start planning a major celebration for next year's 25th Anniversary, they are holding back for now, waiting to see what the future brings. 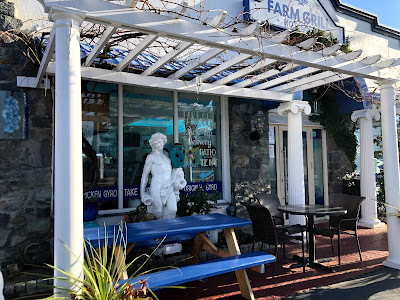 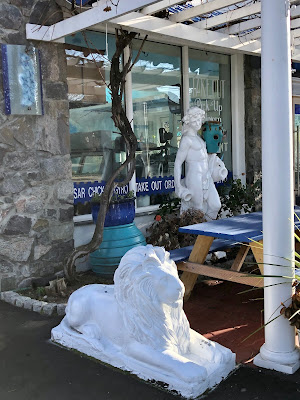 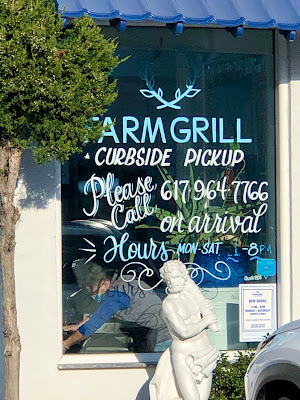 The restaurant has its own parking lot, and it's surrounded by various Greek statuary and columns. The grape vines that are entwined outside were brought from Greece years ago from Alex's grandfather's home. There were still outdoor tables set up, though I expect those might have been taken in now that it has gotten colder. The restaurant is relatively small, especially now that social distancing rules are being enforced. It was a very clean restaurant and the food counters offered an enticing array of attractive dishes.
The Farm Grill is open for lunch and dinner, six days a week, being closed on Sundays. It's a casual spot, where you order at the counter and your food is then delivered on a tray, or prepared for take-out. Currently, they also offer free deliver to Newton and Needham. In addition, they do catering for large parties. 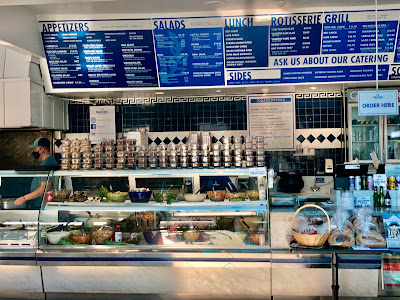 The menu is extensive, and should appeal to any palate. There are 33 options for Appetizers, most available as Small $5, Medium $7, or Large $15. You'll find options such as Grilled Eggplant, Orzo Salad, Octopus Salad, Grape Leaves, Hummus, Spicy Feta Spread, Taramosalata and Tzatziki. There are 7 options for Salads ($9.50-$12.95), all served with pita bread and dressing. There are a number of options to add to each salad as well.
There are 9 Lunch selections ($10.95 each), which include pita bread and a salad. You can choose items like a Kabob (chicken, beef, lamb), a Gyro, or a Grilled Chicken Wrap. Rotisserie Chicken is one of their specialities, and is available in quarter-size ($8-$8.45) and half-sized ($10.95) plates, and include a salad and two hot sides. You can also purchase just a whole chicken, weighing four pounds for only $10!That's a tough bargain to beat anywhere.
There are 5 Dinner choices ($10.95-$19.95), such as Moussaka, Baked Lamb and Spanakopita. Plus, there are 5 Seafood options (market price) such as Swordfish, Shrimp or Salmon Kabobs, and Grilled Octopus. Finally, there are 10 options for Dessert ($3.95-$5.95). They also sell a limited selection of Greek beer and wine, as well as plenty of nonalcoholic beverages. 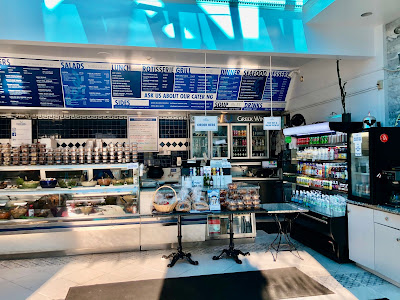 Prices are reasonable, with most meals costing $10-$15, especially considering how many of the items are freshly made at the restaurant. Their biggest seller is their Greek Salad with Grilled Chicken, with the Chicken Gyros and Chicken Kabobs taking second and third place. The Beef and Lamb Gyros are also very popular. During lunch-time, they sell more soups while at dinner-time, they sell more desserts.
Some of Alex's personal; favorites include the Lamb Chops, though he also likes to make his own variations of some of the menu items. He prefers lean meats, and will use steak in a Gyro. He also eats lots of salads, stating they are light, but still filling. And based on the popularity of their Greek salad, there are plenty of people who agree with him.
As I said earlier, Alex has stayed true to the roots of his father. As such, the menu hasn't changed much since 1996, and showcases a healthier diet, like the Mediterranean diet, with lots of vegetables and no fried foods. Interestingly, the Boston Globe, March 29, 1996, in their first restaurant review of the Farm Grill, mentioned that French fries were on the menu, but that is no longer the case. There are plenty of healthier replacements for the fries. 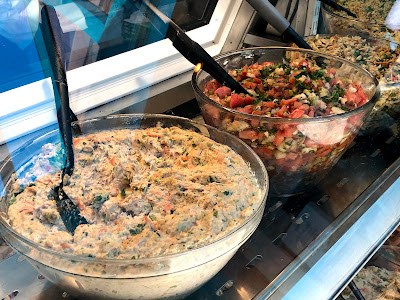 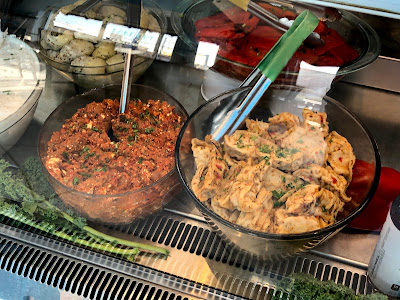 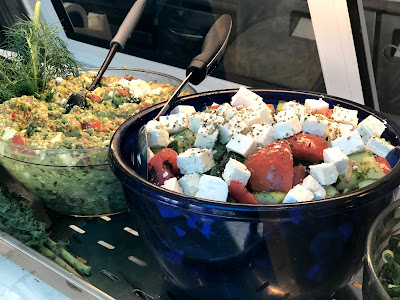 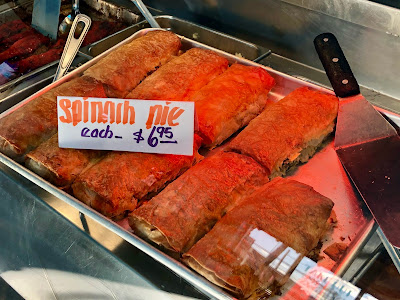 Some sample photos of what can be seen at their food counters. Everything looked fresh and appealing. You'll probably have difficulty deciding what to purchase as so much looks good. One of the more intriguing items were Chicken Dumplings, which they purchase wholesale from a place in Chinatown. They then bake the dumplings, making them more Greek with lemon and seasonings. 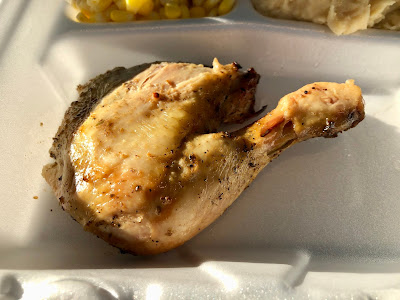 I sampled several of the different dishes, and my initial impressions were very positive. I certainly need to return to try more of the options, and I expect I'll enjoy them as well. The Rotisserie Chicken captivated me from the start because of its powerful and enticing aroma. It was one of the most aromatic pieces of chicken I've tasted in quite a while. When I tasted it, the chicken was moist and tender, with plenty of flavor from its seasonings. And that superb aroma continued to linger.  Highly recommended. 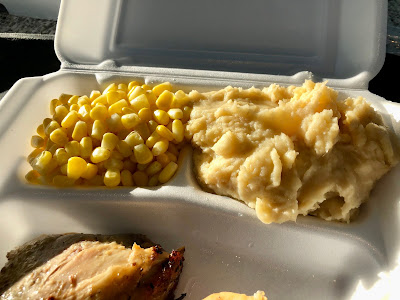 I got the rotisserie chicken with basic mashed potatoes and corn, more to see how they would prepare these basics. And they were executed well, the potatoes being fresh and creamy, and the corn tender. It can be the little things that tell you much about a restaurant. 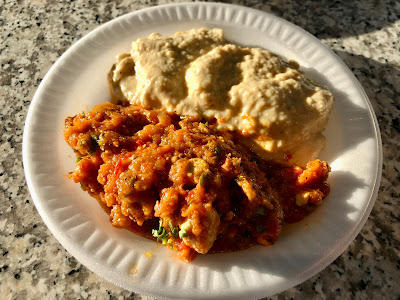 I also sampled several of their dips. The Spicy Feta with Eggplant, was rich and tasty, with the salty tang of the feta and a bit of a spicy kick. The Hummus was creamy and flavorful, with an excellent consistency and a nice garlic kick. Grab some pita and dig in. 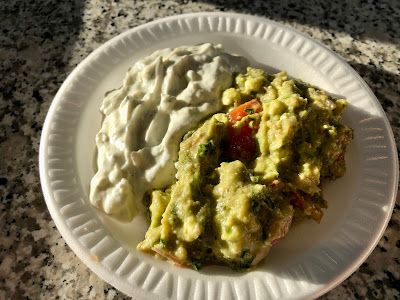 The Tzatziki was also creamy and tangy while the Avocado & Feta dip was a tasty and interring combination. Feta can enhance many dishes. Any of these dips would make for a fine appetizer. 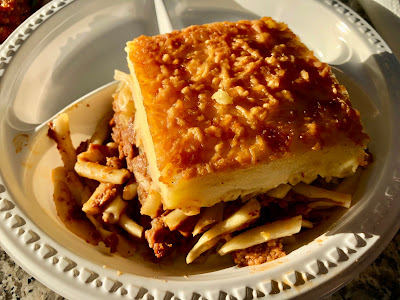 Farm Grill makes large trays of Pastitzio fresh every day, slicing pieces for order and reheating them. This is a hearty dish, great to fill your belly in a winter day. The crisp béchamel topping is like a layer of rich custard, and it tops the tasty, seasoned ground beef, sauce and tubular pasta. There is a distinct taste of cinnamon to the dish and it's so large, you might need to take some home with you. 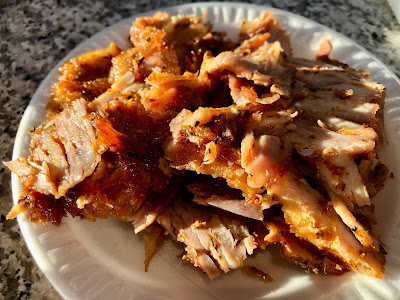 I tried a plate of their Gyro Chicken, and again was thoroughly captivated. The aroma I had smelled from the rotisserie chicken seemed even stronger with the gyro chicken. Still as enticing and alluring, making you want to devour the meat. The chicken had excellent crispy skin, and the meat was moist and tender, well seasoned and bursting with flavor. So damn good. I can easily see why the Gyro Chicken is one of the most popular dishes on their menu. Highly recommended! 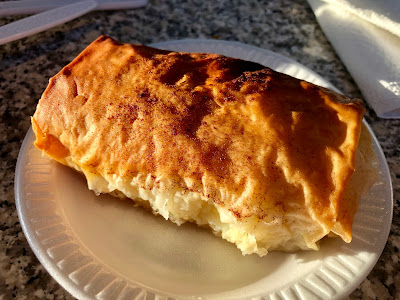 For dessert, I tried the Galaktobouriko, basically a vanilla custard within phyllo dough. It was creamy and sweet, though not overly so, and would probably be even better heated, and topped by a scoop of ice cream.
My initial impressions are very positive for the Farm Grill, especially their Rotisserie Chicken and Gyro Chicken. On my next visit, I'll have to try some Lamb. Reasonable prices, freshly made dishes, and excellent taste make this a fine spot for a casual lunch or dinner. And if you want to have a small holiday gathering, you could purchase plenty of dishes here rather than cook at home. I understand why the Farm Grill has been so popular for nearly 25 years. If you've never been there, I highly recommend you check it out.
Posted by Richard Auffrey at 3:00 AM