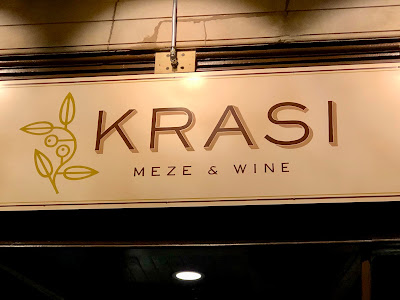 "Krasi is the modern word for wine in Greek, and it derives from the ancient, meaning a mixture of wine and water, which was indeed the way wine was drunk in antiquity."
The Food and Wine of Greece by Diane Kochilas

To Demetri Tsolakis, one of the owners of the new Krasi restaurant, "Krasi means love and life and a way to express yourself. In Greece, you’ll see a lot of people use wine to celebrate the better moments of life and also the not-so-great moments. Here, let’s calm down with some wine, and let’s start talking.’”
The other owners include Chef Theo Tsilipanos, Stefanos Ougrinis and Tasha Breshinsky, and all have connections to Committee and/or Greco, both which are favorites of mine. So, I was excited when they first announced the opening of Krasi, which occurred this past February, just prior to the pandemic. I attended their opening party but then, because of the pandemic, I didn't dine there again until last week. 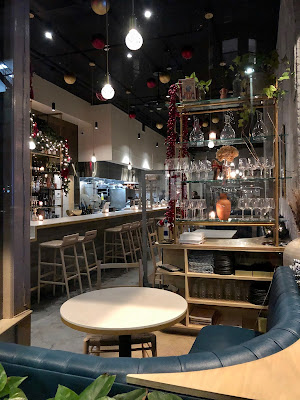 The medium-sized restaurant has changed its seating some since its original opening, including the use of plastic shields, to make it safer to dine inside. While I was there, it was relatively quiet, and there were only a couple of other tables occupied. 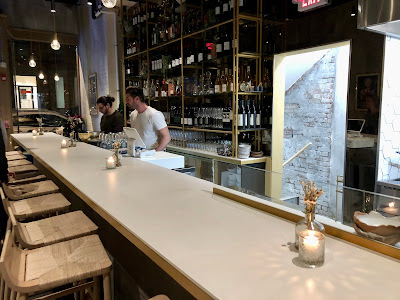 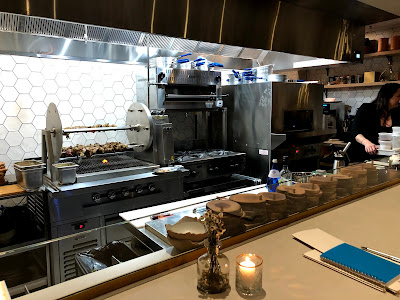 To the left side of the restaurant is a 15-seat, marble-topped bar, which includes five spots in front of the open kitchen. Those are excellent seats and it is where I sat when I dined there last week. The photos above are from their opening party, and now there is a plastic partition in front of the kitchen, but you can still watch all the action. 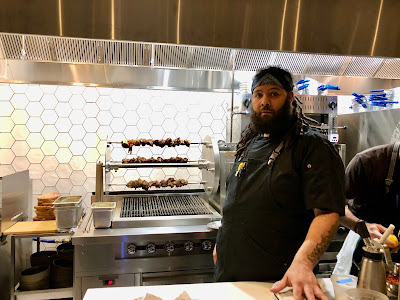 This is Executive Chef Valentine Howell, who has previously worked at places including Legal Sea Food, Locke-Ober, and Mastro’s Ocean Club. Very personable and based on the food, quite skilled in the culinary arts as well. 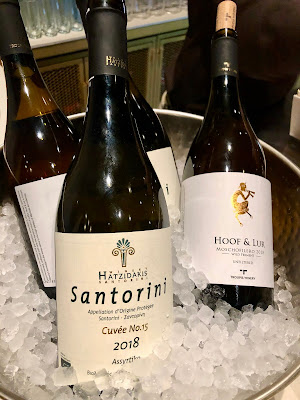 As Krasi means "wine" then you would expect wine to be very important to the restaurant, and it most definitely takes a central place. Their all-Greek wine list, with over 180 selections, is phenomenal, showcasing some of the best Greece has to offer, as well as presenting many unique wines. Even the most adventurous wine lover will find wines made from indigenous Greek grapes they have never tasted before. In addition, the wines are generally more natural, often certified organic or Biodynamic. Krasi's Wine Director, Evan Turner, recently won the 2020 Iron Sommelier competition for his curated list of Greek wines.
Demetri Tsolakis previously stated, “We have some of the first bottles ever produced by certain winemakers from 1995. We have the last production of Haridimos Hatzidakis, who passed away in 2017. We bought whatever was left of his wine in the United States; he was a well-respected winemaker and was the first to bottle monovarietals like aidani and mavrotragano from Santorini. His daughter has taken over and will no longer be bottling those grapes. We have the last of its kind. We have wine made by monks; we have wine that’s been submerged in the Aegean Sea for five years. We’re going to introduce grapes people have never heard of and probably can’t pronounce or spell, a lot of grapes Greek people don’t even know.”

They have about 25 wines available by the glass ($12-$25), including Sparkling, White, Rose, Orange, and Red wines. In addition, Krasi will open almost any bottle on its list if you commit to purchasing two glasses of that wine. So, in essence, nearly every wine is available by the glass. Besides wine, Krasi also serves 7 different Greek beers and a variety of Greek spirits, such as ouzo, tsipouro, masttiha, tentura and more. 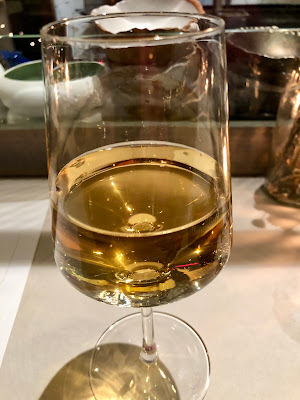 At my recent dinner, I opted to begin with a glass of the 2016 Sclavos Tsaousi ($16). The Sclavos Winery is located on the island of Cephalonia, and their vineyards, about 20 acres, are organic and Biodynamic, with many vines that are 80+ years old. Their wines use natural yeasts, are unfiltered and unfined. This wine is produced from the indigenous Tsaousi grape, which primarily grows on Cephalonia. With a 13% ABV, this is definitely a nice white wine for the winter, as it has a hearty heft to it, more full bodied and full of flavor. The intriguing melange of flavors includes notes of honey, peach, melon, a touch of floral notes, and a mineral backbone. A well balanced wine, with good acidity and a pleasing, lingering finish. An excellent food wine. 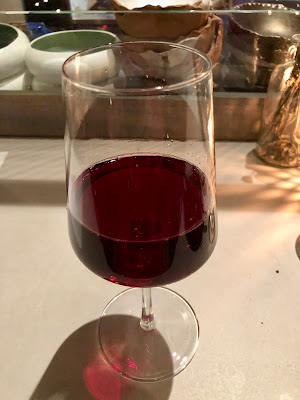 I later ordered a glass of red, the 2018 Tetramythos Mavro Kalavrytino "Natur" ($14). The Tetramythos Winery was founded in 1999 in the nothern part of the Peloponnese. This wine is certified organic and was fermented with indigenous yeasts. It is produced from the rare, indigenous Mavro Kalavrytino grape, from 30 year old vines. With a 12.5% ABV, it was a lighter bodied red, with delicious notes of cherry, plum, and spices. Good acidity, smooth tannins, and a touch of earthiness. Another good food wine, this would pair well with pizza to burgers. 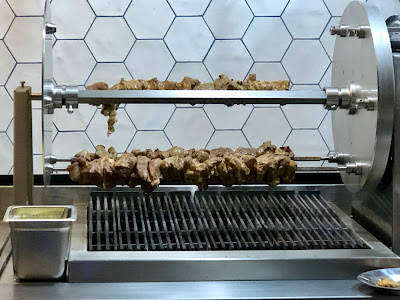 As for their food, the menu is intended to reflect a regional approach to Greek cuisine with traditional cooking methods. The menu can also be inventive, using Greek ingredients and cooking techniques to create something new and delicious. I was thoroughly impressed with their cuisine during both their opening party as well as my recent dinner. Last week, I just wanted to sit at the bar and keep trying dish after dish.
The menu is diverse, offering plenty to entice any palate, and tends toward dishes which can be shared. You can begin with one of their 3 different Breads, such as the Tiropita Rolls.  Check out their Charcuterie (6 choices, priced $8-$12), which are served with traditional accompaniments, and include choices such as Noumboulo (wild boar) and Country Pate. You might also want a Greek Cheese (6 choices, priced $6-$8), such as Manouri, Sfela, Ladotyri, Metsovone, Mastelo, and Graviera. Or begin with one of their Dips (3 choices, priced $12-$16), such as the Tzatziki Htpiti with crispy chicken skins. Those chicken skins are scrumptious.
The Garden dishes (7 choices, priced $10-$16) are their vegetable plates, such as Pantzaria, sea salt roasted beets, and Gigantes, butter beans. Their Seafood dishes (6 options, priced $14-$28) include items like Skoumbri, smoked mackerel, Tsipoura, grilled sea bream, and Brandade, salted cod.
The Meat dishes (6 options, priced $18-$22) include items like Giouvetsi, lamb osso buco; and Souvla, Greek rotisserie (which changes daily). And if you have a group of four to six people, you could opt for the Feast of the Gods ($329), which includes one of all of their two-dozen meze, as well as the breads and dips. 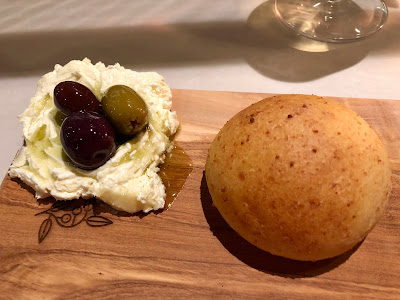 I began my recent dinner with a Tiropita Roll ($2), which is made with halloumi and graviera cheese, and is accompanied by olive oil, butter and olives. These type of rolls originate in Central Greece, and all of their breads are served with honey butter with sea salt, churned in-house. A tasty soft roll, filled with melted cheese, was elevated by the creamy, honey butter. I wish I had that butter at home. 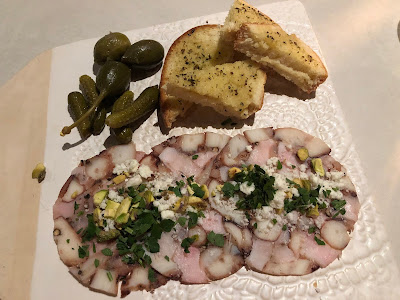 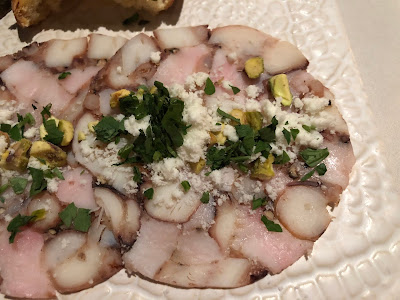 Off the Charcuterie list, I chose the Octopus Mortadella ($12), which is house made, with pistachios, peppercorns, and lamb suet, and accompanied by sourdough toast and cornichons. Such a creative dish, and quite delicious. Silky tender octopus and fat, enhanced by the nutty crunch of the pistachios. 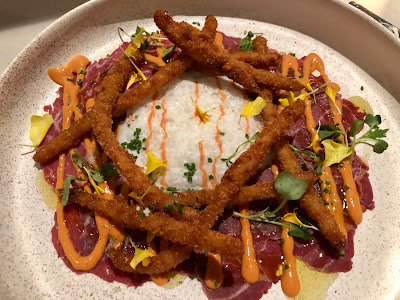 From the meze, I chose the Pastitsio ($22), a deconstructed version made with filet mignon carpaccio, braised tomato vin, chilled bechamel sauce, and crispy pastitsio noodles. It was intriguing and delicious, and the crispy noodles would make for a great snack if I just had a big bowl of them. The carpaccio was thin and tender, enhanced by the béchamel and tomato vin. It certainly is not your classic Pastitsio but this inventive version is compelling. 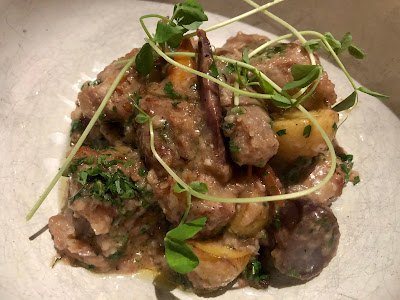 Another meze, the Sofrito ($20) is slow cooked veal, made with homemade vinegar, shallots, garlic, and parsley, and comes with carrots and potatoes. This dish comes from the island of Corfu, where they do a lot of braising. With such a great depth of flavor in the sauce, the tender veal, carrots and potatoes, made a tasty, hearty dish, perfect for the season. 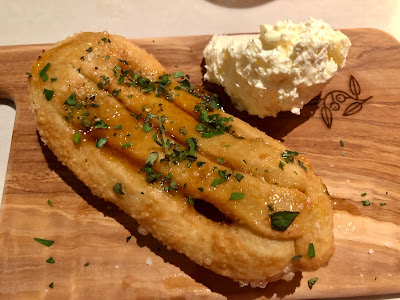 For dessert, rather than order off the dessert menu, I decided to order one of the breads, the Lalangia ($6), which is basically fried dough with thyme honey. It makes for a fine dessert, with a nice outer crunch and a softer interior, with a little sweetness from the honey and butter. I'd certainly order this again.
Overall, my recent dining experience was excellent, from the wine to the food. Service too was excellent, attentive without being obtrusive, and the servers are well versed on the food and wine menus. The ownership team has created another worthy destination, a fine Greek restaurant offering foods you probably won't find anyplace else in the city. Their Greek wine list is superb, with such intriguing diversity, many unique choices, and a great policy of opening any bottle if you buy two glasses. Hopefully, we can get this pandemic under control so we all can dine here more frequently.
Posted by Richard Auffrey at 3:00 AM