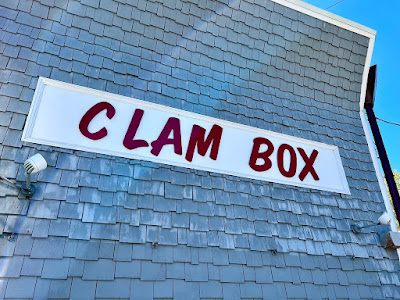 We all know lobster prices have been quite high lately, and I've seen lobster rolls at some spots selling for over $50. This past Friday, I had lunch at the Clam Box of Ipswich, my favorite clam shack on the North Shore. On Fridays, they often offer a special, a Fried Lobster dinner and that special was available when I dined there. So, my dining companion and I ordered a Fried Lobster plate, as well as a Combo plate with Fried Clams & Fried Scallops. 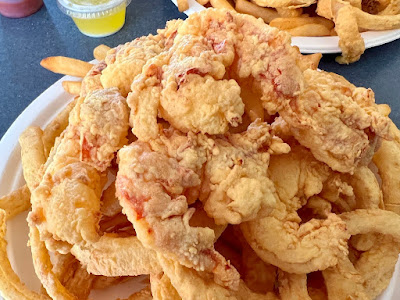 The Fried Lobster plate was only $37, and each lobster piece is basically half a lobster tail, so you end up with about three lobster tails of meat. This dish is only a few dollars more expensive than the last time I had this dish, sometime last year, and somehow they have avoided the significant price increases at other places. The dish came with a pile of French fries and onion rings too. The lobster was delicious, with a nice, light and crispy batter, sweet lobster, and some melted butter for dipping. It's a dish I highly recommend, and which I will almost always order if it's available. 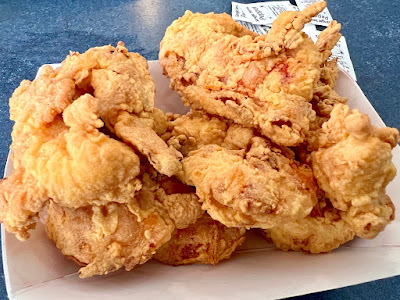 When I picked up my order, there was another plate of fried lobster. I was told that the cook felt he had overcooked these lobster tails, so he had prepared me a new batch, which were atop the plater of fries and rings. However, they gave me the "overcooked" ones as a free extra. They could have just thrown them out, or eaten it themselves, but they chose to give it to a customer. What a delightful surprise!
Yes, these were a bit darker and slightly crispier than the other lobster tails, but if they had been served to me, I wouldn't have complained at all. They were still delicious, the lobster was still tender, and the slightly crispier batter was still very tasty. What an abundance of lobster for lunch!
It is this type of customer service which I want to highlight, from the perfectionist tendency of their cook to the generosity of their other staff. They didn't have to make a new batch of fried lobster, and could have just served me the original batch. However, the dish didn't meet their high standards so they chose to redo it. And they didn't have to give me the the original batch too. They didn't even have to tell me what they did. They chose to do so though, and that would impress any customer. It's something that any customer would tell their family and friends. They generated much good will. 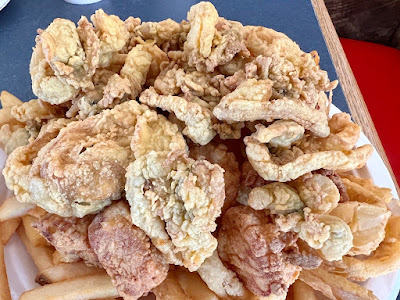 Their Fried Clams & Scallops were also excellent, as usual. And they don't skimp on the seafood. 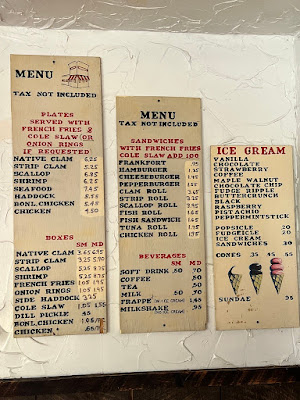 On one wall of the restaurant, they have an old menu, when prices were far lower than now and they once served ice cream.
The Clam Box of Ipswich earns my highest recommendation, and this is certainly not the first time I've experienced excellent customer service there. They have always been responsive to any issues with their food, and those issues are a rarity. The importance of customer service cannot be ignored. Their food is also stellar, and their fried seafood has such a fresh and clean taste, and is commonly tender and sweet. They have moved their outside dining area closer to the restaurant, instead of on the other side of the parking lot. With the great weather we've been having, now is the time to make a trip to Ipswich and enjoy some delicious fried seafood.
Posted by Richard Auffrey at 10:10 AM