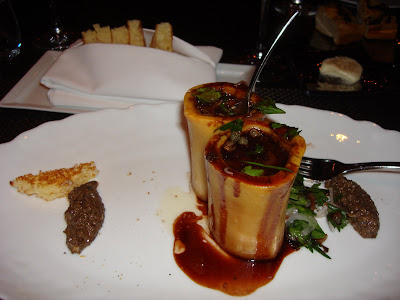 Las Vegas has plenty of options if you wish to visit a high-end steakhouse. Last year, I dined at Craftsteak and had a superb and memorable dinner. So this year my challenge was to select a steakhouse that was at least as good. I was prepared to face this challenge.

After much consideration, I chose Cut, Wolfgang Puck's steakhouse at the Palazzo Hotel. The menu appealed to me, I read some positive reviews online and got a few recommendations from friends. This is the second location of Cut, the first being located in Beverly Hills. I hoped that my experience would be very positive.

Cut presents a rather modern and elegant decor, with both tables and half-circular booths. We were seated in one of the booths and it was quite comfortable and well cushioned. A place you could easily sit for hours. We began with a glass of sparkling wine as we reviewed the wine list and menu. We also received thin, parmesan crusted breadsticks, crunchy and tasty.

While discussing bread, I should also note we received more bread a short time later, a choice of several different types including a pretzel roll. The pretzel roll was ok, but nowhere near as good as those of the Swiss Bakers. And that was my only complaint, and a very minor one, of the evening.

The wine list, as expected, was extensive with plenty of interesting options. What caught my eye was the 1995 La Rioja Alta Gran Reserva 904. Back in 1890, five Basque and Rioja-based vine growers created "Sociedad Vinicola De La Rioja Alta" and they changed their name to "La Rioja Alta, S.A." in 1941. This is a traditional style Rioja and we thought it was sublime.

It had a moderate red color with an intoxicating nose, an alluring combination of fruit, spice, earthiness, and floral accents. It was just one of those smells that seemed to twist and turn from odor to odor, revealing hidden depths. The taste of the wine lived up to the great promise of its nose. It was an incredibly silky, smooth wine that tantalized your palate with its complex melange of flavors, including cherry, raspberry, vanilla, mushroom, and mild spices. The finish was incredibly long, echoing on and on. Every element of this wine was harmoniously balanced. This was just an incredible wine and we had to order a second bottle during dinner. I would give this my highest recommendation and I am trying to find a retailer where I can buy a case of this wine.

The food menu is standard for a steakhouse with salads and starters, steaks, non-steak entrees, and sides. Though many of the specific selections are not standard. The starters include standards such as steak tartare and more creative dishes like veal tongue. The steaks include aged corn-fed Illinois and Nebraska Prime, American Wagyu, and Japanese Wagyu. If you don't want steak, you might enjoy dishes like rotisserie duckling, wild French turbot or roasted Maine lobster. Prices are typical of a high-end steakhouse, most entrees costing $40-$60.

I began my dinner with the Bone Marrow Flan (pictured above) with Mushroom Marmalade and Parsley Salad. I enjoyed the fact the flan came within the bone. It was light and creamy with a meaty and earthy flavor. It is a dish that would appeal to most people, especially if they did not know it included bone marrow. My friend would not even try the flan, the idea of bone marrow grossing him out. But he would have loved it if he had just tasted it. I thought the dish was delicious.

Next up was the Maple Glazed Pork Belly, with Asian Spices, Sesame–Orange Dressing, and a Winterlla Pear Compote. Another excellent dish, with a tender and flavorful pork belly that paired well with the fruit dressing and compote. The smoky pork belly also went very well with our Rioja. The presentation was very nice on this dish. (Unfortunately, I had put my camera away so I could just savor the food.)

Earlier in the evening, our server brought out a tray of meat to show us the differences between American and Japanese Wagyu, the greater fat in the Japanese very evident. I already knew I would be ordering the Japanese Wagyu, especially as it is much rarer to find. I had a 6 oz. New York Sirloin made from Japanese Waygu of the Kagoshima Prefecture. I had some Point Reyes Blue Cheese atop my steak. It was an exceptional piece of meat, melting like butter in my mouth, and the melted blue cheese added a nice pungent flavor. Absolutely delicious. Yes, it was pricey, as authentic Japanese Wagyu is anywhere, but I considered it well worth the splurge.

Service was exceptional, and numerous individuals, including the sommelier, helped to ensure our dining experience was very enjoyable. The servers were courteous, personable, and accommodating. You certainly felt special with all the attention, though it never felt overwhelming.

Overall, I was very impressed with Cut and would give it my strongest recommendation. It is well worth a splurge. The dining experience was as good as Craftsteak so I succeeded at my challenge. Now, I just have to think of another steakhouse for next year.

I am going to cut in April when I celebrate my university grad in Vegas. My parents have been raving about the Wagyu steak which keeps bringing them back. I am glad I stumbled on your blog to see they serve bone marrow. I have always wanted to try it! And of course they said that the pork belly was fantastic!

Hi Murissa:
Thanks, and I hope you have a great graduation celebration at Cut!