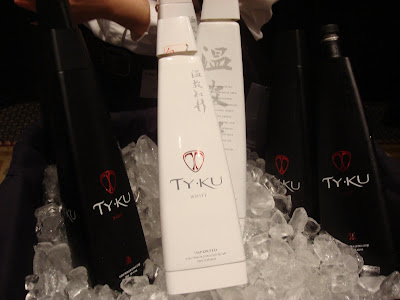 Last year at ULNVino, I was intrigued by Ty Ku, a new Saké liqueur. It was a blend of Saké, Vodka, and other ingredients including yuzu, pomegranate, prickly pear, oolong tea, green tea, honeydew, plum, ginseng, damiana and dragon's eye. But the blend has since changed. I was told that Shochu is now used instead of the Saké and Vodka.

This liqueur is now supposed to be lower in calories than many other liqueurs. It only has 72 calories in 1.5 ounces, which you can compare to 121 calories in St. Germain and 147 in Grand Marnier. Taste wise, I could not really detect any difference. It was just as good as last year, and you can drink it on its own though it is probably best mixed in a cocktail.

But the change in the Ty Ku Liqueur was not my biggest surprise. Ty Ku now makes two different kinds of Saké and I got to try both of them. I have also since learned they make a Soju, in a blue bottle, but I have not tasted that yet.

The Ty Ku Black ($27-$30) is a Junmai Ginjo Saké made in California and comes in a black bottle. The rice has been polished down to 60%. There are few details about the Saké on their website so I don't know the type of rice used or its SMV. It was a decent Saké, fairly dry, with a clean taste, flavors of steamed rice and melon and decent finish. But it did not excite me. It was a good but not memorable drink. But their other Saké was quite memorable.

The Ty Ku White ($125) is a Junmai Daiginjo and it was brewed in Japan. It was produced by Saké brewmaster, Yoishio Koizumi, using the famed Yamada Nishiki rice. The water comes from the Oirase River, which is fed by melted mountain snow, and the yeast strain dates back to the Edo period (1603-1867). This was an amazing Saké, incredibly smooth, elegant and slightly creamy. The varied fruit flavors, touches of banana, melon and pear, were accompanied by a subtle earthiness. The lengthy finish was very satisfying and there were intriguing hints of other elusive flavors in the finish. I could not identify them as they seemed to come and go so fast but they only intrigued me more. This is certainly a top notch Saké, albeit pricey, though it is comparably priced to to some other high-end Daiginjos.

Now, I just need to check out their Soju!
Posted by Richard Auffrey at 5:55 AM

You seem to know a lot about sake...I'll trust your judgment and try that TY KU White soon. And if that liqueur is low in calories, I'll definitely be picking that up too

The TY KU White is absolutely divine. Comes with my recommendations!

I went to a wedding where every table had a bottle of the Ty Ku White. It simply added to the beauty of the wedding and was absolutely perfect.