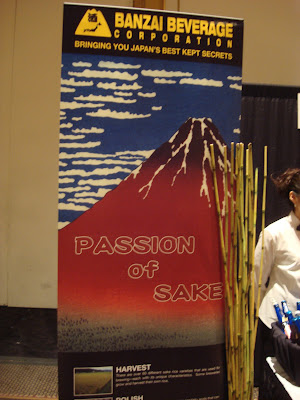 Another of the Saké tables at the UNLVino grand tasting belonged to Banzai Beverage Corporation, which distributes a wide variety of Saké brands. They were at UNLVino last year and I previously reviewed some of their Saké. I tried some different ones this year. Their sign, pictured above, also obviously pleased me. 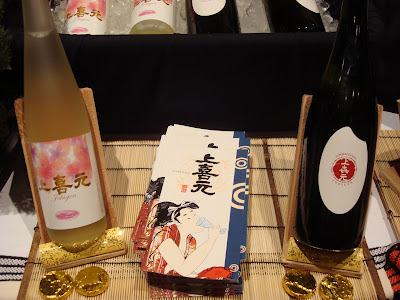 The Sakata Shuzo brewery, located in the Yamagata Prefecture, was established in 1946. They produce the "Jokigen" brand, which has an interesting translation. "Jo" means "high quality," "Ki" means "happiness" and "Gen" means "source." So, it could be the "source of high quality happiness." I was very fortunate to meet their brewer, Takahi Sato.
I have previously reviewed the Jokigen "Happiness" Junmai Ginjo, which I really enjoyed. This year I tasted the Jokigen "Sweet Dream" Junmai ($25/500ml), which has had 35% of the rice polished away. This Saké had a mild sweetness to it with pleasant green apple flavors. It had a nice crispness to it and probably would be a good accompaniement with spicy foods, such as Thai. It is also a Saké that would likely appeal to those new to Saké. 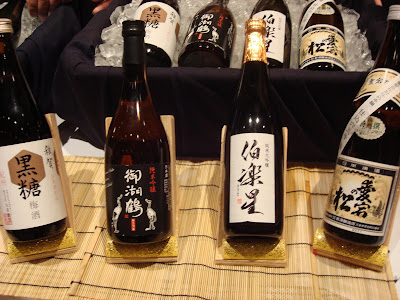 The Mikotsuru "Drifting Crane" Junmai Ginjo was made by the Hishitomo Jyozo brewery in the Nagano Prefecture. It is made from Yamada Nishiki rice of which 45% has been polished away. This was an absolutely delicious Saké with a full flavor and plenty of citrus fruit taste. It had a lingering finish and would be fine with or without food. Another Saké that would be great for a newcomer.
An interesting drink was the Saika Kuro Ume “Brown Sugar Plum” Umeshu. This is a plum wine with an infusion of brown sugar. Plum wine is generally sweet and is often best as a dessert wine. This wine had a very strong smell of brown sugar which also came out on its taste. It actually seemed to overpower much of the plum flavors. I did not really care for this wine though some may enjoy the sweet flavors. I might use this in cooking though, especially in preparing desserts though it might work in a sauce for some entrees too.
Posted by Richard Auffrey at 5:57 AM

Hi! It was great to read your review of Sake Fever '09. I was in LV for Sake Fever this year ('10) & I was able to interview some of the Tojis and try the brand new Super 9

Please check out my review...
http://www.sundaymorningsoliloquy.com/2010/05/sake-fever-2010-in-las-vegas.html

Thanks very much Leyla. I am sorry I missed out Sake Fever this year. Your review makes it sound like there was some excellent Sake there.