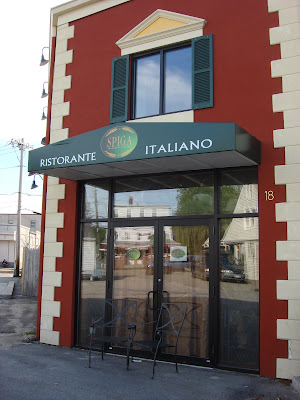 I recently attended a special Grand Opening reception at Spiga Trattoria Italiana in Needham. I have previously wrote about their new chef, the famed Marisa Iocco, and all of the other changes at this restaurant. Now I can give you some more first hand information about Spiga, and I feel this is a restaurant you need to visit.

It is easy to get to this restaurant as it is just a short distance off Rt.128. With all of the fast food chains nearby, Spiga is a bright spot for those seeking more than the usual chains. It is a small, homey place with an elegant marble topped bar and an outside patio. It has high ceilings and their oven is visible from the dining room.

I spent a little time conversing with the Proprietor, Carmelo Iriti. He is a passionate man, desirous of making Spiga an excellent restaurant. Bringing in Chef Iocco was an ingenious move and he has further plans for the near future, including revising their wine list, to add more boutique Italian wines.

Numerous hors d'oeuvres were passed out over the course of the night, each one delicious, indicative of a very talented chef. Before any of the food was delivered, enticing smells wafted through the restaurant, enhancing my hunger. I also had some Cavit Lunetta Prosecco, which was actually quite good, a bit creamy with nice fruit flavors and it was not too sweet.

We began the evening with a glass of Gazpacho, which came in either yellow or red (indicative of the type of tomato used). You drank it rather than used a spoon. Seven tomatoes were used to make the thick and richly flavored gazpacho. It tasted quite fresh, much better than any mere tomato juice. Next there were small Scallops with a roasted garlic puree for dipping. The scallops were tender and the puree had a zesty garlic flavor. Another seafood item was like a Cup of Seafood in stock or broth, including shrimp, scallops and lobster. The broth was quite flavorful and the seafood all appeared fresh. We also had quite large Shrimp with a light, avocado vinaigrette which I really enjoyed, even though I am generally not fan of avocado. 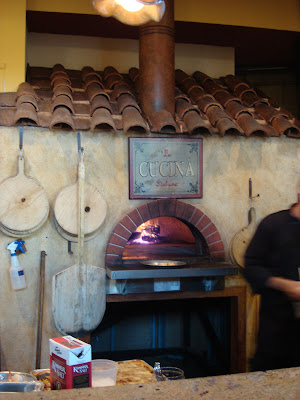 The bite-sized pieces of Lasagna were incredible! It had a meaty and tasty Bolognese sauce with veal, beef, lamb and chicken liver. The pasta had a nice firmness to it and I wanted to devour the entire plate of lasagna. I luckily was able to have a few pieces of it and I will be returning to Spiga for more. The Short Rib in parsnip cream and Italian oil was moist and tender.

We even had bite-sized pieces of Chef Iocco's famed Bread Pudding, another amazing dish. The bread pudding was incredibly light, with a fine vanilla flavor. But the small taste was but a tease as I craved an entire dish. Unfortunately, the restaurant was not open for dinner that night or I would have stayed after the party to have a full dinner and dessert.

Service was excellent and I did speak with a couple of the servers. They too impressed me with their passion and professionalism.

I forsee that Spiga is going to become a hot spot so I suggest you check it out now and be ahead of everyone else. I will be returning there next week to check out dinner. I will be sure to have more of the bread pudding and will be reporting back.

Posted by Richard Auffrey at 6:01 AM

Man, that lasagna was amazing. Great to see you again!