Day 2 of Taste Camp East: This was to be a long and very busy day, a real challenge to my palate. We would visit five wineries as well as taste wines from numerous other wineries that we did not visit. Plus, we would have lunch at Shinn Vineyards, dinner at Grand Cru Classes, and literally dozens of wines with dinner, all brought by the Taste Camp attendees. Sounds like training for a Wine Iron Man event. 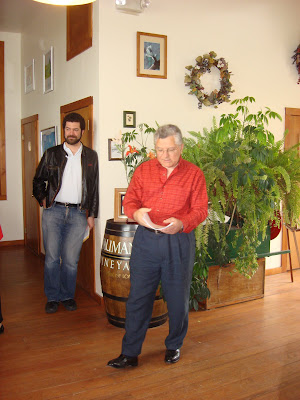 Our first stop of the day, at 10am, was at Roanoke Vineyards, which I previously visited last fall. Roanoke is owned by Richard Pisacano (picture above in the center) and his wife Soraya. Richard discussed his winery and led us through a tasting of five of his wines (though there were no donuts). He was very personable and eager to answer our questions.

Roanoke only owns seven acres of grapes: three Cabernet Sauvignon, three Cabernet Franc and one Merlot. Thus, they only make about seven barrels of wine a year. They are truly a small, boutique winery. Once harvested, the grapes are brought to Wölffer Estates, where their wine maker, Roman Roth, will make the wine. Their objective is to make Bordeaux style wines and they use French clones in their vineyards. 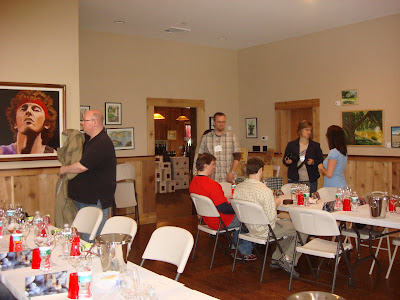 Of the five wines I tried, the two I most liked were the 2006 Cabernet Franc (big surprise!) and the 2007 Marco Tulio.

The 2006 Cabernet Franc ($32) is a blend of 87.5% Cabernet Franc, 6.25% Cabernet Sauvignon, and 6.25% Merlot. It has an alcohol content of 13.2% and only 148 cases were made. This wine was a light red in color and I detected no green/vegetal smells on the nose. The nose actually provided some appealing black cherry and spice. On the palate, there was some nice fruit, more black cherry as well as a touch of blueberry, plus nice spicy undertones. The tannins were moderate so the wine would likely be better with food. It had a fairly lengthy finish and overall I enjoyed this wine. Though I am not usually a fan of Cabernet Franc, I did like this wine. And in fact, later in the day, I found a few other Cab Francs that I liked.

The 2007 Marco Tulio (about $22) has not yet been released and was named after the wine maker's father-in-law. It is a blend of 53% Cabernet Sauvignon, 39% Cabernet Franc and 8% Merlot. It was made for early consumption. This light red colored wine had a subtle nose of cherry. On the palate the cherry flavors were more subtle and there was a strong spicy streak with mild tannins. It reminded me a bit of the Cabernet Franc though a more muted version, something more casual. It would probably be a good BBQ wine. 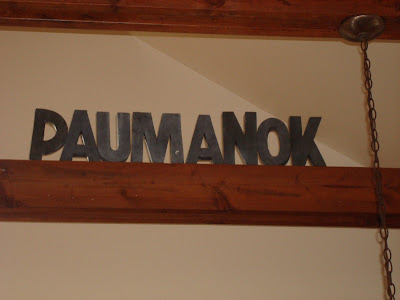 Our next stop was Paumanok Vineyards, which had been my favorite winery on my previous Long Island visit. This time I got to meet the winery owners, Ursula and Charles Massoud, as well as their son Kareem. They all made us feel very welcome and Charles led us through a tasting of a fair number of their wines. They all seemed very down to earth, just genuinely nice people. I enjoyed all of the wines I tasted, a few that I had tasted last year. But I also got to try the new vintage of a few old favorites too. 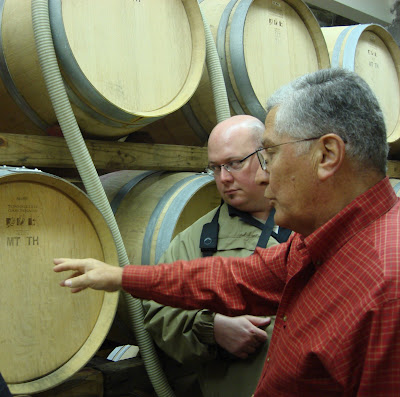 There is Charles Massoud on the right, explaining the markings on one of their wine barrels. That is also Dale Cruse looking on in the back.

The 2007 Barrel Fermented Chardonnay ($18.99) was delicious, a crisp wine with flavors of apple and butterscotch and the oak was restrained. This is the style of Chardonnay that I really prefer. I also got to try the 2008 Chenin Blanc ($28), the new vintage of this wine. I loved the 2007 vintage and the 2008 impressed me as well. They are the only Long Island winery that makes Chenin Blanc and I think other wineries should start growing this grape. This is an exceptional wine and I bought some of the new vintage. I can't recommend this wine enough.

The 2005 Merlot ($18.99) is a delicious, easy drinking wine, sure to please most people. Nice dark berry flavors with a touch of spice. Plenty of character for the price. The 2005 Assemblage, the new vintage, was excellent, maybe spicier than the previous year, but just as good. 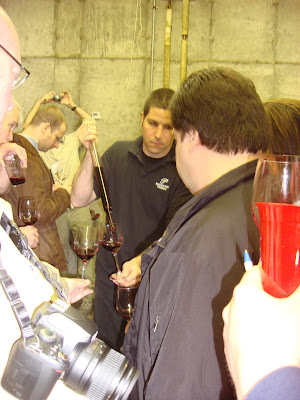 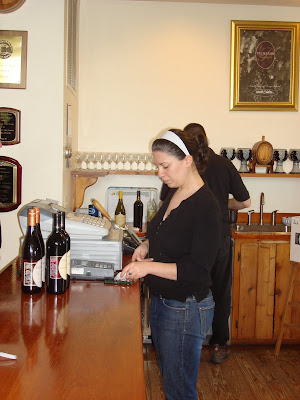 Above, you will see Anna, such a nice and helpful person who works at the winery. I met her on my previous visit and it was great to see her again.

If you visit Long Island, you must stop at Paumanok. They make excellent whites and reds, of various price points, and it is simply a very pleasant winery. I know that when I return to Long Island, I will definitely stop here again.

Posted by Richard Auffrey at 6:04 AM