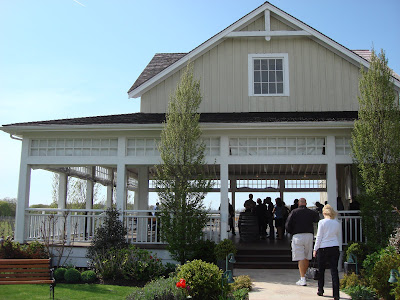 After our lunch and wine tasting at Shinn Estates, it was time to move onto our next winery, Bedell Cellars. Bedell most reminded me of a Napa winery, a more grandiose winery. The winery was established in 1985 but the owner/wine maker, Kip Bedell, sold it in 2000 to Michael Lynne, former Co-Chairman and Co-CEO of New Line Cinema. Fortunately, Kip was kept on as the wine maker.

While on the large porch pictured above, Kip poured a selection of his wines for us. We did have some fruit, cheese and crackers, including quite a delicious blue cheese. 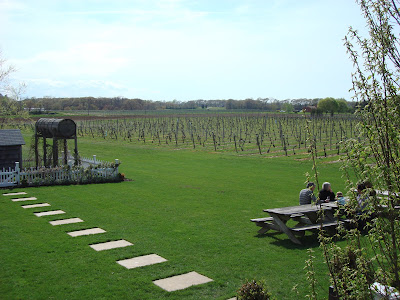 Here are my two favorite wines from our Bedell tasting.

The 2007 Corey Creek Vineyards Gewurtztraminer ($30) is made from 100% Gewurtztraminer in a dry Alsatian style. It is aged in 98% stainless steel and 2% new French oak, and only 240 cases were produced. It only has an alcohol content of 12%. This wine has an alluring and aromatic nose of exotic spices and restrained tropical fruit, the very distinctive Gerwurtztraminer smell. On the palate, the wine is crisp with nice minerality, tropical fruit flavors and a spicy backbone. It has a decent finish and should appeal to anyone who enjoys this grape.

The 2007 Bedell Cabernet Franc ($25) was only bottled a month ago so still it a little tight. But I think it has much potential. Yes, I know, another Cabernet Franc that I enjoyed. What a surprise. But this Cab Franc had plenty of interesting fruit and none of that green/vegetal taste that turns me off. It is a bit tannic so it is probably best paired with food. I think this wine is reasonably priced and I would love to try this in six months or so to see how it has opened up. 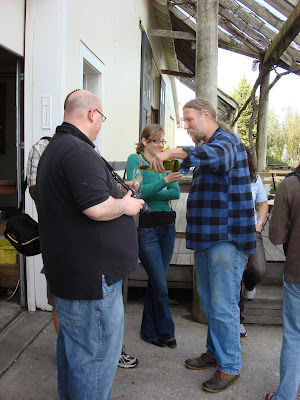 After Bedell, it was on to our last winery visit of the day, to Lenz Winery. Founded in 1978, the winery has almost 70 acres of vineyards and all of their wines are "estate" wines, meaning they almost always only use grapes they grow themselves. They are very proactive in the vineyards and "micro-manage each vine to ripeness each year."

Yet when they enter the winery, they are much more hands-off. They use French oak exclusively and their wines are generally considered more French than California in style. We met Eric Fry, the wine maker (picture above pouring wine) and he was quite a character. Very passionate, witty and down to earth.

The tasting itself was lots of fun as well as eductional. We got to compare wine that was still being created to the finished products. Eric would pour a plastic pitcher of the unfinished wine, asking us to guess the grape and that was certainly a difficult taste. As the unfinished wine generally had a paler color, I was stumped once when we tried a Pinot Noir which I thought might be a Riesling. Other attendees were similarly stumped. 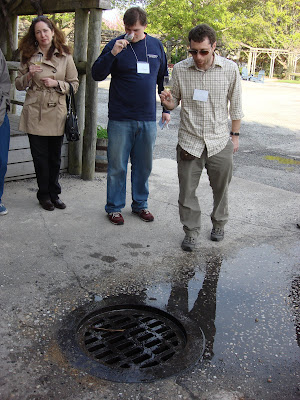 Part of the tasting took place outside, around a large drain where we all spit. It was pretty funny to have everyone standing around spitting. Unfortunately, I did not take detailed tasting notes at this winery. A casualty of being the last winery after such a long day. But, I can tell you that I tasted plenty of delicious wines here, both whites and reds. Chardonnay, Merlot, Cabernet Sauvignon, including some of their older wines. Good fruit, nice balance, fine structure. And the prices were usually very reasonable, including some wines under $20. You definitely should check out Lenz wines.

Yet our wine drinking was not over yet. For dinner, we went to Grand Cru Classes, a company that provides wine education. We were having a BBQ and most, if not all, of the attendees had brought wine for us all to taste and drink. There were dozens and dozens of bottles available, from all over the world, including wines from some less common U.S. states, brought by bloggers from those states. We drank, chatted, ate and savored the day. It had been a quite long day, but we had accomplished much. I certainly slept very well that night.

I left early on Sunday, sadly missing out on two more winery visits on the South Fork. I especially regret missing the Channing Daughters Winery as I have heard lots of positive feedback from other attendees who did go there.
Posted by Richard Auffrey at 6:00 AM