The King of Vodka: Pyotr Smirnov 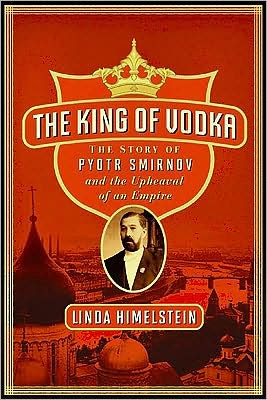 Vodka has a solid place in Russian history, and vodka has also become very popular all over the world. There is a flood of artisan vodkas on the market, including many flavored ones. For a long time, Smirnoff was probably the most well known vodka in the U.S.

Yet what is the history of Smirnoff? How did it transform from a small Moscow distillery to eventually being produced in the U.S.? These and many more questions are answered in a new book about Pyotr Smirnov, creator of Smirnov vodka.

The King of Vodka: The Story of Pyotr Smirnov and the Upheaval of an Empire was written by Linda Himelstein (HarperCollins Publishers, May 2009, 419 pages, $29.99). Linda is a long time journlist who has written for publications including The Wall Street Journal and Business Week.

The King of Vodka presents a biography and history of Pyotr Arsenievich Smirnov and the vodka company he created, extending from the early 19th century through today. It is a fascinating story, how a serf (roughly equivalent to a slave) became a very wealthy man through sales of vodka. Through Pyotr's story, we also see some of the history of Russia, the significant changes that occurred during the 19th century. Pyotr was a determined man, an ingenious entrepreneur who succeeded well and whose legacy continues to this day.

I learned much from this book, finding many compelling tidbits of information.

The book discusses what happens to Pyotr's company once he dies, and how his descendants tried to keep the company thriving. Pyotr stands out though in the book as the most intriguing character in this story. It is well worth a read and I am sure you will find the story as fascinating as I did.
Posted by Richard Auffrey at 6:00 AM